Triggers for disordered eating in kids

“I have treated serious eating disorders in boys, kids from low-income families, children who are recent immigrants or who are first-generation, and kids of color. Eating disorders also affect kids of any size, including those with a high or normal BMI,” says Nancy Dodson, MD, adolescent medicine physician. (Here are the silent signs of eating disorders in children.)

One reason young people may be prone to eating disorders: They have a tendency to think in black and white.

“Kids don’t have an ability to take a nuanced approach to healthy eating, so when a doctor or family member sends them the message that their weight or eating is a problem, they tend to be extreme in making changes,” explains Tracy Richmond, MD, director of the Eating Disorder Program at Boston Children’s Hospital, and professor of pediatrics at Harvard Medical School. “Some kids start cutting back dramatically on calories, cutting out entire foods groups or start skipping meals, which are very disordered eating behaviors.”

It’s important to highlight the difference between an eating disorder and disordered eating.

For those with an eating disorder, ranging from anorexia to binge eating disorder, they tend to obsess over food (think calories, food avoidance). This obsession can interfere with the ability to function in daily life, affecting focus, sleep, and other things. Overall, these eating behaviors can threaten their well-being and mental health.

Unlike anorexia or bulimia, disordered eating is not a diagnosis, rather, it’s a “descriptive phrase” used to emphasize irregular eating behaviors that could potentially lead to an eating disorder diagnosis, according to the Academy of Nutrition and Dietetics. Common signs and symptoms of disordered eating include frequent dieting, feelings of guilt and shame associated with food, and a preoccupation with food, weight, and body image.

In order to help children have a balanced relationship with food without triggering unhealthy eating behaviors, experts recommend parents take a thoughtful approach when it comes to talking about meals and weight.

Here are some phrases to avoid—and some that can improve your child’s eating habits and self-esteem instead.

It may sound like an innocent comment or even a good way to send the message to your kids that you’re health-conscious. Yet, research in the Journal of Adolescent Health shows that talking about your own weight in front of your daughter significantly increases the likelihood that she will use unhealthy and extreme methods to control her own weight, as well as binge eat.

“Some examples of extreme weight control measures include fasting, diet pills, self-induced vomiting, and diuretic use,” explains lead study author Dianne Neumark-Sztainer, RD, division head in the division of epidemiology and community health, School of Public Health, University of Minnesota and the author of I’m, Like, SO Fat!: Helping Your Teen Make Healthy Choices about Eating and Exercise in a Weight-Obsessed World.

Tip: While it may be challenging given the cultural focus on being a clean eater and the dangers of being overweight, it’s important to avoid talking about your weight completely with your children. “Say less and do more such as making your home an environment in which making the healthy choice is the easy choice instead,” recommends Neumark-Sztainer.

Some parents believe that a little weight-teasing may actually draw attention to eating behavior and even help a child lose weight, according to a 2018 study in Pediatrics. However, it actually can do just the opposite. Even when it’s said in a loving way, parents who tease their kids about their food intake or weight may unwittingly trigger binge eating as well as cutting down their child’s body satisfaction, a risk factor for a host of other eating disorders, according to a 2017 study in Pediatrics.

Additionally, when parents engage in weight-teasing they inadvertently send the message to siblings, extended family members, and even friends who join them for meals that it’s OK—even accepted—to make comments about their child’s eating habits or body shape, and size. This can lead to further teasing. If you’re questioning whether your child really minds your teasing, err on the side of caution, and do your best to avoid commenting on how much (or how little) they’re eating altogether.

Tip: To make a truly loving gesture that’s effective at amplifying healthy habits, point out positive choices your child makes instead. These can include spending an afternoon outdoors instead of playing with technology or simply the fact that they’re enjoying their vegetables.

“In a world where parents are trying to do the best for their child’s health, it is common for them to feel like they need to talk with their kids about their weight; however, it may have unintended consequences,” explains Jerica Berge, professor in the department of family medicine and community health, University of Minnesota.

According to Berge’s research, published in the Journal of Behavioral Medicine, children with parents who tend to talk to their child about their weight, body size, or shape have an increased risk for engaging in disordered eating behaviors, being overweight or obese, and experiencing depression or lower levels of well-being.

Tip: “Parents should engage in conversations about their child’s health rather than weight and to make it a collective effort,” explains Berge. “For example, a parent can say, ‘Our family wants to eat healthy so that we can all have strong bones and muscles’ or ‘Eating fruits and vegetables help our bodies work their best’.”

While it might feel like the best way to support your child, suggesting you start a diet together can cause more harm than good.

“Our studies have found that daughters or sons who are encouraged to diet by their parents are at increased risk of engaging in disordered eating behaviors and becoming overweight or obese. We found this association even 15 years later,” says Berge. What’s more? The effect can go on from generation to generation.

“Kids who experienced encouragement to diet or weight talk from their parents were more likely to engage in these same conversations with their own children when they became parents. This is highly concerning because we also know encouragement to diet is associated with an increased risk to engage in disordered eating behaviors, be overweight/obese, and experience depressive symptoms and lower well-being,” she warns.

Tip: So what’s a more effective way to be supportive of a child who may be struggling to manage their weight? Focus on healthy actions that can be done by the whole family, not just those who may be concerned with their weight. “For example, focus on eating healthy as a family or being physically active as a family rather than on restricting or dieting together,” Berge advises. (Here are nutritionists’ best healthy-eating secrets.)

Many pediatricians and even school officials are trained to spot a high body mass index (BMI)—measure of body fat based on height and weight—and will comment to a parent about the dangers of being overweight or obese. These are two terms that have a significant stigma attached and may harm your child psychologically. Weight stigma is known to trigger disordered eating habits such as binging, according to the American Academy of Pediatrics.

On the flip side, kids may hear the term and engage in over-the-top eating restraint. “We have seen children in our program who were told by their doctor that they need to lose weight. They may even bring their BMI down to the 50th percentile, which is considered ‘healthy,’ and yet they are now very, very sick because of the extreme measures to get there,” explains Dr. Richmond.

Tip: To protect your child from the side effects of weight stigma, consider telling your pediatric provider ahead of time that you prefer they address any concerns about your child’s weight without your child in the room. And regardless of what they say, be sure to avoid reinforce the need for weight loss once you get home.

“Even if a physician recommends that your child lose weight, keep the entire focus on behavior change rather than on numbers on the scale.

As a family, encourage healthy habits such as eating lots of plants (fruits, veggies, nuts, beans); limiting sugary beverages to be a treat; enjoying dessert mindfully; and being physically active, says Dr. Dodson. “Be clear that you think they are beautiful and you don’t want them wasting any time obsessing over weight.”

“I wish I had more self-control”

If you or your child knows someone who’s constantly dieting to lose weight—or worse, struggling with a full-blown eating disorder—it’s important to be clear that you do not approve of their behaviors around food.”

Parents and family members of children with anorexia will often say ‘I wish I had a little of her self-control,'” explains Dr. Dodson. “However, this isn’t helpful. Anorexia is not ‘really good self-control’ but an extremely wicked disease that can ruin a child’s life. The patient obsesses over food to the exclusion of all other interests.”

Tip: Instead of referring to others’ ability to restrict their intake as a positive, you can use the opportunity to teach your child that exercising extreme self-control around foods is unnecessary and, if taken to an extreme, may even have serious consequences.

“Food should be a source of pleasure and joy for children. Parents should make eating as stress-free as possible and keep the focus entirely off of calories and control,” says Dr. Dodson. “I’d rather have my own child grow to be their own size and emotionally happy than suffer from an eating disorder.”

The post 6 Things Parents Say that May Trigger Disordered Eating in Kids appeared first on The Healthy.

Thu Nov 12 , 2020
Beginning on Sunday, students will prepare meals for Azalea Terrace, N.C. Faith Health, Latino Community Services and Aster Park, non-profit University distribution partners who serve low-income residents and will determine who gets the meals. Students will deliver the meals to the organizations Nov. 17-20. “These four organizations are identifying people […] 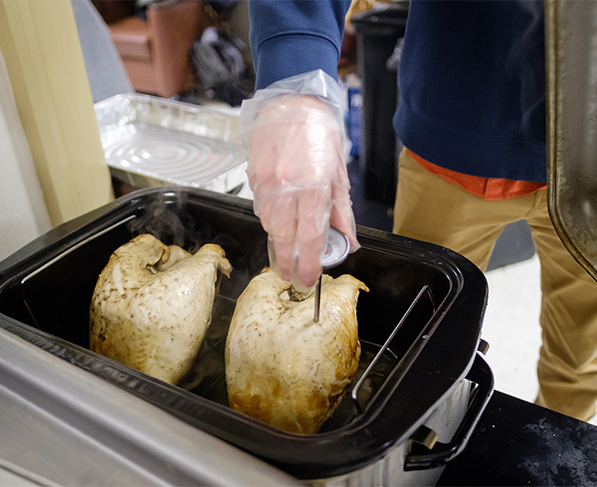