Support the independent voice of Phoenix and help keep the future of New Times free.

These days, the Valley’s restaurant scene has gotten pretty good at embracing diners’ dietary restrictions and decisions. You can now be a vegan here or indulge in a plant-based diet, and eat pretty well.

Veganism, in short, means abstaining from animal food products. Among the distinctions from vegetarianism are that vegans also skip additional products like eggs, dairy, and honey. For an added perspective on the subject, we turned to Michelle Dudash, a chef, registered dietitian, and cookbook author formerly based in Scottsdale. Dudash shared a few pointers for vegan diners in the Phoenix area.

For those thinking about making the change, “start gradually,” Dudash says. “You don’t have to go all or nothing to enjoy the health benefits of less meat. Your taste buds may take an adjustment period. And for your intestinal tract, too, it’s in your best interest to go gradually to prevent discomfort while adjusting to more plants.”

And if you’re not a vegan dish whiz in the kitchen, you’re likely to dine out sometimes. “Not all restaurants do vegan and vegetarian well,” Dudash warns. “And some execute it deliciously. So, use the vegan card wisely at restaurants, that is if you want to be in love with what you ordered.”

So what kind of substitutions can you request from your server to make a meal vegan-friendly? Dudash says to sub beans, peas, mushrooms, and lentils in place of meat, and avocado instead of cheese, sour cream, and almost anything fatty or creamy.

Based on some of Dudash’s other suggestions, we’ve assembled a field guide to a vegan-friendly Phoenix.

Mornings can be easy for vegans in metro Phoenix. Try the 100-percent vegan Desert Roots Kitchen in Tempe for breakfast burritos and bagels.

You can also find the Dr. J. breakfast sandwich at Early Bird Vegan, and there’s the Smothered Vegan Breakfast Burrito at Liberty Market in Gilbert. Also, check out the vegan options on the menu at Melrose Kitchen and Scramble — now with multiple locations.

Juices, coffee, and bites are also essential, so try Urban Beans Bar & 24hr Cafe and 24 Carrots (both also offering lunch and dinner), The Coffee Shop at Agritopia in Gilbert, The Nile Coffee Shop in Mesa, and Genuine Fresche, which has locations in Tempe, Chandler, and Gilbert.

The entire menu at GuacStar Kitchen + Cantina is vegan … and very good.

Take away the meats, cheese, and sour cream of Mexican-style fare, and you’re still left with some pretty great burrito options. “Someburros also has a delicious vegan burrito,” Dudash says. The Tempe eatery is joined by many other Mexican food eateries in the Valley offering vegan-friendly options.

C.A.S.A. SunBa in downtown Tempe labels vegan options on its menu, and most of the restaurant’s burritos can also be served as tacos. Tocaya Organica offers a vegan menu including Southwestern salads, burritos, and quesadillas. Try the spinach mushroom filling at Gadzooks Enchiladas & Soups, and the tacos, burritos, paella, and salads at Otro Café.

Because no one can go too long without pizza and pasta, Italian restaurants offer a variety of vegan-friendly dishes and pies. The Vegan Dalai Lama Pizza from La Grande Orange Grocery & Pizzeria is a well-known dish in the Phoenix vegan culinary world, while True Food Kitchen offers an artichoke, pesto, and almond ricotta pizza. D.P. Dough has a lengthy menu of vegan calzones.

The cuisine of Ethiopia is also a safe bet for vegan eaters. Cafe Lalibela is known for its vegan and vegetarian options in Tempe. Authentic Ethio African Spices is a hidden nook on McDowell Road with some surprisingly good vegan options, though what’s actually in stock will vary from what you see on the menu. Vegan and vegetarian dishes at Gojo Ethiopian Restaurant lean heavily on lentils, peas, and greens. You can’t go wrong with the veggie combo with injera bread at Abyssinia Restaurant and Café.

“Indian restaurants have amazing vegan or vegetarian food,” Dudash says. “That is just what some of their cuisine naturally is.”

“Charleen Badman of FnB does some amazing things with vegetables.”

The options at Mediterranean restaurants are plentiful and often a go-to for vegan eaters.

Though FnB Restaurant isn’t strictly Mediterranean (more American, if not Arizonan), Dudash has some nice things to say about the upscale restaurant’s Mediterranean menu items. “Charleen Badman of FnB does some amazing things with vegetables,” she says. “Her falafel, hummus, and grain salads are some of the best I’ve ever had.” And Badman picked up a James Beard Foundation award in 2019 to prove it.

Try Hummus Xpress in Tempe, and Pita Jungle — found most everywhere in town. At Pita Jungle, Dudash suggests the lentil fattoush salad. “It is made of simmered lentils with caramelized onions, crispy pita chips, brown rice, over a bed of romaine with a lemon vinaigrette,” she says. And for starters, go for Pita Jungle’s large trio hummus — and remember to ask for an extra pita.

Glendale became home to the first fine-dining vegan restaurant. Yes, the 65-seat Casa Terra in the historic downtown area has a menu curated by chef Jason Wyrick and inspired by flavors of Mexico and the Mediterranean — specifically Italy, Spain, and Morocco. Think saffron chorizo risotto with a gold leaf, or sweet potato gnocchi. Note: Casa Terra’s dining room is currently closed, but the chef now is running The Vegan Taste, one of many local meal delivery services. Menus examples include tacos Veracruz, Ciambotta with polenta, and satay noodles.

“At Asian restaurants, tofu and edamame are a good way to get your protein,” Dudash says. Aside from that, Phoenix offers plenty of vegan-specific, Asian-style eateries, including Green Lotus Vegan, Vegan House in downtown Phoenix, Veggie Village, and Loving Hut Vegan Cuisine, which has multiple locations in the Valley.

Fresh Mint in Scottsdale is the only kosher-certified vegetarian restaurant in Arizona. For more vegan-friendly Asian dishes, check the menus at Little Szechuan in Tempe and also try the Impossible “Sui Mai” Dumplings and Veggie “Garden” Potstickers at Bitter & Twisted Cocktail Parlour in downtown Phoenix.

The Verdura version of a po’boy.

This is a broad category with wavy boundaries. Luckily, many of the Valley’s American restaurants offer vegan dishes.

The Coronado, found unsurprisingly in the Coronado neighborhood, has an entire menu dedicated to vegetarian and vegan fare, even burgers. Choose from offerings like the red potato and garbanzo burger or the tepary bean burger, both of which you can pair with vegan mayo and vegan bread.

Pomegranate Café has an expansive menu of locally sourced vegan options, from brunch items to bowls, burritos, sandwiches, and salads. But the restaurant’s fresh-and-raw section is unique. Dubbed as “living” food, menu items include the raw everything bagel made from nuts, seeds, and vegetables, the raw Arizona roll for sushi fans, and the raw tacos vivos – purple cabbage shells stuffed with walnut taco “meat,” with a Green Rainbow Salad on the side.

The Trash Panda Vegan food truck can often be found parked outside its sister spot, Early Bird Vegan, in south Phoenix and serves an array of plant-based American classics and comfort foods including mac and cheese, BBQ wings, cheeseburgers, and sloppy Joes.

The plant-based eatery Verdura along the Seventh Street Corridor offers po’boys filled with flash-fried button mushrooms, plus soups, salads, and starters. And the carne asada nachos do not disappoint. As for one of their darker features, the Goth Waffle is heaven-sent, as are the colorful smoothies.

Whyld Ass is another 100-percent plant-based eatery, known for its charcoal water (just a heads up there), and menu items like Whyld Jax, or whole-grain buckwheat flour pancakes, mac and cheese made with thick basil cashew cheese sauce, caramelized onions, and gluten-free pasta, and the falafel burger with whyld tzatziki. There’s also a wide selection of juices, smoothies, and coffees.

And what’s more American than hot dogs? Get your buns over to Simon’s Hot Dogs in Scottsdale for some vegan dogs. Also, try the vegan-approved veggie dog or pretzel at Short Leash Dogs. Even Joe’s Real BBQ has added some vegan options — i.e. a spicy jackfruit meat substitute. Same for Welcome Diner, which has a jackfruit-based po’boy that’s as killer as it is colorful.

Just because you’re on a vegan diet doesn’t mean you have to give up dessert. Most of the restaurants above offer a dessert option (again, Verdura’s Goth Waffle), but a few places really zero in on that last course.

Try the soy-based ice cream at Nami — where you’ll find their signature tSoynamis like banana cream pie, chai tiramisu, and coffee coco loco. There are also vegan sorbets at Melt.

The menu of “superfood desserts” at Giving Tree Cafe in central Phoenix consists of five kinds of pies (including a rose cardamom iteration) and a chocolate chip cookie.

A vegan, build-your-own cinnamon roll chain opened a couple of years ago in Gilbert — specifically SanTan Village Parkway and Williams Field Road. Patrons of Cinnaholic get their choice of 18 frostings and 23 toppings, as well as signature rolls.

There are also many vegan options at Zak’s Chocolate. All of the single-origin dark chocolate bars, vegan truffles, and “milk” and white chocolatier bars use coconut milk.

Keep Phoenix New Times Free… Since we started Phoenix New Times, it has been defined as the free, independent voice of Phoenix, and we would like to keep it that way. Offering our readers free access to incisive coverage of local news, food and culture. Producing stories on everything from political scandals to the hottest new bands, with gutsy reporting, stylish writing, and staffers who’ve won everything from the Society of Professional Journalists’ Sigma Delta Chi feature-writing award to the Casey Medal for Meritorious Journalism. But with local journalism’s existence under siege and advertising revenue setbacks having a larger impact, it is important now more than ever for us to rally support behind funding our local journalism. You can help by participating in our “I Support” membership program, allowing us to keep covering Phoenix with no paywalls.

Thu Mar 4 , 2021
Sophia Rhodes loves to watch Chef Kevin Belton cook, but he may love seeing her cook even more. NEW ORLEANS — Even at just the age of nine, Sophia Rhodes has found her passion. You can see it just by watching her for a few seconds: Cooking is her calling. […] 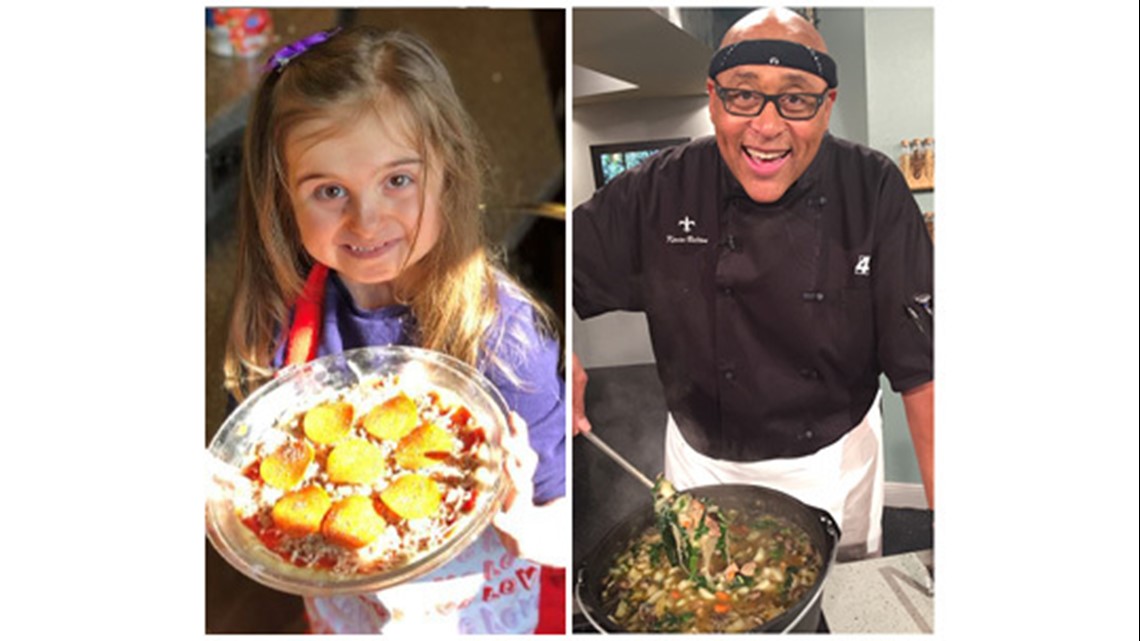