As Harold McGee explains in “On Food and Cooking,” starches are made of long chains of glucose sugar molecules that are linked to each other. Starches are useful in thickening because of the way they behave in the presence of hot water. He summarizes the process in “Keys to Good Cooking”: “When heated in a liquid, starch granules soak up water, swell, and release long, tangly starch molecules, all factors that cause the liquid to thicken.”

McGee says that cooking for an extended period, bringing the mixture to a boil or vigorous stirring will eventually thin out the mixture, which you may or may not notice depending on how thick what you’re making is. In a normal sauce, you may not notice the thinning much, other than a desirable smoothness at which point the starch particles are no longer detectable. Excessive stirring of something thicker like a custard can break it down.

Not all starches are created equal. How they perform depends largely on the size of their starch granules (layers of starch molecules packed together) and the length of their starch molecules, as well as whether there are other molecules that might impede the starches from doing their work. Practically speaking, that affects how much of the ingredient you need, how quickly it thickens and at what temperature it happens. Each starch has a gelation range, when it swells, forms an amorphous network with water and begins to thicken. Below, you’ll find that temperature, as specified by McGee, as well as what else you need to know about your options.

Flour is not a pure starch, meaning there are other proteins and fats that interfere with the starches’ ability to thicken, which is why it requires more to be added to a recipe to incorporate as effectively as some of the other options, McGee says. Another problem: Flour has to be cooked to taste good. In “The Food Lab,” J. Kenji López-Alt says that cooking the flour in butter or oil (to make a roux) first gets out that raw flavor. The fat keeps the starches from clumping together prematurely, too. Once you’re done cooking the flour, you can add it to your soup or sauce, leaving the fat to melt away and the starches to disperse. Foods thickened with flour, McGee says, will be opaque and matte. Gelation temp: 126 to 185 degrees Fahrenheit.

Uses: Avoid flour as a thickener in fillings, says Lauren Chattman in “The Baking Answer Book.” It can form gluten and turn tough. Flour is a go-to for a reason in gravies, says Nicole Rees in Fine Cooking. It doesn’t matter if the gravy is opaque, and the flour will help the gravy maintain its integrity on reheating. And since you can make a gravy with fat or drippings from roasted meat, you can use them to cook the flour.

Flour holds up well in longer-cooked dishes, including gumbo or a braise such as boeuf bourguignon, and can add more nutty flavor when browned in the pot as part of the roux.

Unlike wheat flour, cornstarch is a pure starch. That makes it a more effective thickener. To reach its full potential, though, it needs to get just about boiling. McGee notes that cornstarch also has a distinctive flavor due to its processing method, which is why, even beyond the risk of making a mixture too thick, you don’t want to overdo it. Cornstarch lends a milky appearance to finished dishes. Gelation temp: 144 to 180 degrees Fahrenheit.

Uses: “Cornstarch gives fruit a satiny, less shiny gloss than tapioca. It won’t clump up and dry out when exposed to hot air, as tapioca will, so it is the natural choice for open-top baked fruit desserts,” says Chattman. Especially with cornstarch, do pay attention to the typical instructions that recommend seeing juices bubbling, which indicates the starch has gotten hot enough to thicken. Cornstarch especially shines in something like a stir-fry sauce, thanks to its translucent shimmer, Rees says.

Cornstarch works well in soups and stews, and it lends a somewhat translucent appearance that is rich but not muddy (think hot-and-sour soup).

Cornstarch, as well as flour, helps puddings and custards by allowing the eggs to properly set at a higher temperature, which often gets dangerously close to where the eggs can curdle. The addition of starch staves off the curdling, and flour and cornstarch are good here because they can tolerate higher temperatures and set and thicken well when cooled.

This is the first of a few tuber and root starches to consider. Arrowroot is similar to cornstarch in that it needs to reach a fairly high temperature to thicken, making it a decent swap for cornstarch. It turns clear when cooked, with a neutral flavor. According to McGee, it creates a less stringy end result than the other tuber and root starches below. However, it can form an unappealing texture when combined with dairy, says Sarena Shasteen, culinary content specialist at Bob’s Red Mill. Gelation temp: 140 to 187 degrees Fahrenheit.

Uses: Like cornstarch, arrowroot works well when you want a more transparent shimmer in something like a stir-fry sauce. Similarly, try it in the fruit filling for a crumble or cobbler.

“Unlike cornstarch, tapioca begins to swell and absorb liquids long before it’s boiling-hot, providing greater thickening power in low- to no-heat applications,” Stella Parks explains over on Serious Eats. This neutral-flavored starch comes from the root of cassava, which is important to look for on the package, Parks says, since tapioca starch from Asia might be made from other plants whose starches gel differently. Tapioca lends a clear, glossy appearance, but can also skew stringy in water, McGee says, making it a better option for puddings. That tendency for stringiness is another reason tapioca is often sold in pearls that are already partially swollen with water, so that they quickly soften and finish thickening. Gelation temp: 126 to 150 degrees Fahrenheit.

Uses: Tapioca “is flavorless and gives fruit and fruit juices a glossy shine,” Chattman says, making it a favorite alternative to cornstarch in pies. Or get the best of both worlds: “Juices thickened with both cornstarch and tapioca become satiny and smooth, an appealing combination,” she says. If you need a last-minute course correction in a sauce, McGee says tuber and root starches, especially tapioca and potato, can help because of their potency, speed and neutral flavor.

Shasteen says this is probably the most palatable starch since it’s a familiar, though fairly neutral, flavor. Potato starch is the most potent of the bunch, with long starch molecules that quickly tangle with each other and thicken a liquid. Those longer molecules, McGee says, can lend the impression of stringiness. Potato starch does, though, create a fairly transparent appearance. Gelation temp: 136 to 150 degrees Fahrenheit.

Uses: In “CookWise,” Shirley Corriher says the “firm, clear gel” that potato starch makes can be a good fit in pie. You can use it in sauces, according to McGee, though be aware that it will “give a noticeable initial graininess.” Here’s where you want to keep stirring because eventually, you will break the starch granules and then the consistency will turn finer and thinner. Potato starch will help maintain that consistency because it doesn’t congeal as much when cooled, McGee says.

Just because some starches are standouts in certain areas doesn’t mean you can’t substitute for one another, especially if you’re in a pantry bind (and if you understand the attributes of the starches mentioned above!).

According to Corriher, these are the equivalents to thicken 1 cup of liquid for a “medium sauce”:

For a thin sauce, the wheat flour drops to 1 tablespoon and for thick, it increases to 3 tablespoons, meaning you’d decrease or increase the other options accordingly.

For versatility and accessibility, if you were going to choose one or two of the pure starches to keep on hand, Shasteen recommends cornstarch and potato starch. “Those are the ones I always have,” she says. And, of course, many home cooks already have all-purpose wheat flour.

No matter which starch you use, don’t add it in its dry form to a dish. “Starch has a nasty habit of clumping when it’s combined with other ingredients, especially liquid. The liquid envelops the starch, and if the starch is bonded to other starches, it can form pockets that don’t get incorporated,” Erin Jeanne McDowell writes in “The Fearless Baker.” That’s why it’s important to mix the starch with a smaller amount of cool liquid first, often referred to as a slurry. (Wheat flour can be combined with fat, as described above.) Adding the slurry gradually and stirring constantly also helps evenly distribute the starch. For baking purposes, McDowell suggests whisking starch into sugar, which achieves a similar result of even distribution.

In addition to an unappetizing starchy flavor, you can thicken a dish too much. As Corriher explains, it can look like nothing is happening, even though the starches are thickening on a microscopic level. You may decide to add more of a slurry, until suddenly the mixture seizes up like glue. “The secret of working with starch-thickened sauces is to bring them to a gentle boil first,” she says. “Then decide whether they are thick enough and add more starch in cold water if necessary.”

McGee raises a few other reasons to go easy on starches. One is they can dull the flavors of a dish. Moreover, starches will continue to thicken and congeal as they cool — good in something like pudding, less so your gravy. Especially for dishes that include flour, cornstarch and potato starch, anticipate that post-cooking thickening by leaving the sauce, soup or stew a little thinner than you want it for serving. McGee says you can also put a small amount on a cool dish to check what the final consistency might be like.

Higher amounts of salt, sugar and acid can all impede the thickening power of starch, which is why it’s especially important to follow a recipe with regard to ingredient amounts, timing and technique (how much and when to stir).

Gregory Gourdet Works to Build a Better Restaurant in Portland

Tue Feb 23 , 2021
As Mr. Gourdet sat in the kitchen of Kann Winter Village last month, a side door was open to the outdoor “village” of 10 yurts, provided by American Express as part of a nationwide program. Tia Vanich, the project’s director of operations and Mr. Gourdet’s business partner, was helping refresh […] 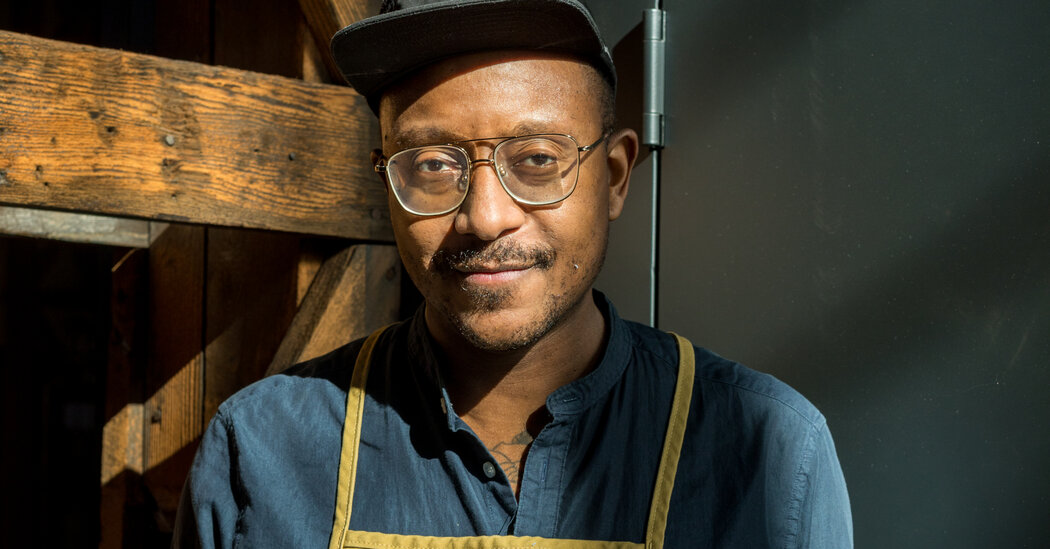