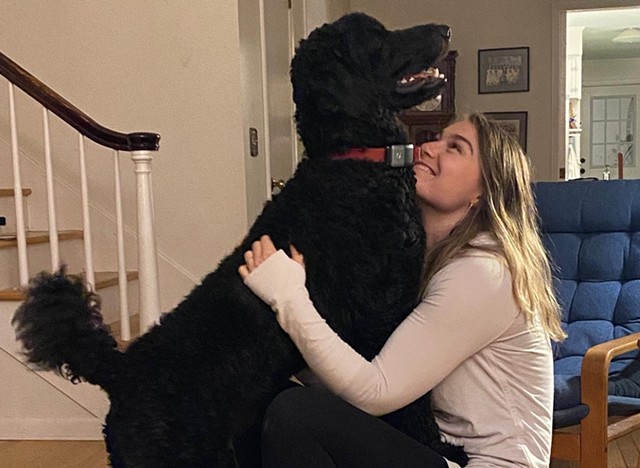 A video of a woman and her service dog being turned away from A Single Pebble in Burlington went viral on social media on Sunday, prompting intense backlash against the downtown restaurant.

Emma Rose McCadden said in an interview on Tuesday that she deleted the two-minute clip from TikTok after it garnered nearly 1 million views. It prompted people nationwide to post negative reviews of the Chinese eatery on Yelp and other websites.

McCadden posted a follow-up video expressing appreciation for the support but asking people not to pen false reviews of the restaurant.

“My purpose here was to educate, not to sink a business,” McCadden said.

On Tuesday, A Single Pebble owner Chiuho Sampson posted a public apology online, acknowledging that she “made a mistake and take[s] full responsibility.”

“I am committed to educating myself and my team going forward so that this regrettable situation never happens here again,” she wrote.

In the original video, McCadden could be heard explaining to Sampson that, according to the Americans with Disabilities Act, it is illegal for restaurants and many other public venues to refuse entry to a service animal. Businesses cannot ask to see proof of disability or animal training certification; they can only ask if the animal is a service animal and what tasks it performs in that regard.

Sampson defended her decision to McCadden in part by explaining that, “People say [their dogs] are service dogs, and they’re actually not.”

McCadden’s husband had surprised her with a Saturday night reservation to celebrate their second wedding anniversary at the restaurant, one of her longtime favorites, she said.

She told Seven Days she has been training her dog Jasper, a black standard poodle, for a year and a half to support her through health issues that can cause her to lose consciousness.

“He is trained in waking me back up if I lose consciousness [and] trained in deep pressure therapy, which can help with regulating my heart rate and my blood pressure,” McCadden said.

While McCadden was disappointed she couldn’t eat at A Single Pebble, she explained that she posted the video because Sampson told her the restaurant does not accommodate any service animals.

McCadden, of Burlington, is a doctoral student at the University of Vermont who specializes in neurodiversity and autism and is fully versed in ADA law.

“When [Sampson] told me it was her blanket policy, that’s when it became like, ‘Oh, no, that’s not OK,’” McCadden said. “It’s a civil rights issue.”

“My goal was to educate them and to make sure that all people, including all disabled people, are able to access their food,” McCadden added. “I think their food is amazing. I would have killed for some mock eel on my anniversary.”

‘Defrost and dump’: slow cooker recipes for the time-poor | Australian food and drink

Wed Jul 13 , 2022
One of our favourite ways of utilising our precious time is to make a meal fresh and prep a freezer bag of uncooked ingredients at the same time. For example, while making Mongolian lamb for dinner, you can also make a bag of the uncooked marinade and freeze it. So […]