On a crisp autumn morning in Hokkaido, Japan’s northernmost island, Sachiko Hoshizawa was meticulously setting out bowls and plates. Immaculately styled in a cheery yellow apron, she ensured that the long tables in front of her had the right selection of crockery, chopsticks and mixing bowls. She then turned to prepare the ingredients, carefully placing pieces of salmon, kelp, potato, carrots and spring onions on the counter of the small kitchen. Finally, she surveyed the scene and stood back behind the counter, perfectly poised with a TV-ready smile on her face, ready for the eager queue of people to swarm into the room.

Hoshizawa – a hugely popular TV cooking show host in Japan – was preparing for a highly anticipated cooking class and I was there to participate. While Japanese cuisine offers a wealth of gastronomic delights, with an endless variety of regional dishes, today she was cooking Ainu cuisine, the food of the indigenous people of Japan. That’s because, long before Japanese food became so emblematic, with sushi and shabu shabu, ramen and yakitori prized the world over, there was another cuisine here that has almost been forgotten.

We think kombu is the secret of long life. I eat it every day

Most of the world will not have heard of Japan’s indigenous people, let alone their food. The Ainu are the original inhabitants of Hokkaido, who have called this island and parts of the surrounding region their home for many thousands of years, living on and with the land. Unlike the Japanese, who practiced rice farming, the Ainu traditionally hunted, foraged and fished. Their food culture was rich and vibrant – and had a distinct and lasting impact on Japanese cuisine.

“Without Japan’s indigenous people, you wouldn’t have that Japanese taste that’s so famous,” said Remi Ie, Director of Japan at Slow Food International. “They created and fostered the food culture of Japan.”

She’s referring to umami, the savoury “fifth taste” that is often associated with Japanese dishes. It’s found in soy, miso and other fermented foods that give the cuisine its unique flavour. But Japan’s umami in fact has its roots in Ainu culture, in the kombu (a type of edible kelp) that grows in lush underwater forests around Hokkaido’s coastlines and has always been used in traditional Ainu cuisine.

“Originally there was no kombu in Japanese cuisine,” said Hiroaki Kon, an Ainu chef and owner of Kerapirka restaurant in Sapporo, one of the few Ainu restaurants in the world. “The Japanese adopted it from Ainu food and now it is used in everything.”

You may also be interested in:
• Japan’s forgotten indigenous people
• The indigenous communties that predicted Covid-19
• The truth about Japanese tempura

Kombu is a main ingredient in dashi (stock), a simple broth that forms one of the culinary cornerstones of Japanese cooking. It’s also used in a slew of other Japanese dishes, from kombu tsukudani (kombu simmered in soy sauce and mirin) to kombu kamaboko (kombu-wrapped fish cakes). Its umami flavour comes from an abundance of amino acids such as glutamic and aspartic acid, and its taste is almost synonymous with Japanese cuisine.

“Hokkaido kelp has very much influenced Japanese cuisine,” agrees food historian Takashi Morieda. “It [used to be] prohibited to kill animals more than 1,000 years ago [in Japan] due to the influence of Buddhism. That meant we didn’t have fat and oil, so we needed something else to make vegetables delicious. That’s why we use dashi; it brings the umami flavour.”

The Ainu did have fat and oil from the animals they hunted, but also used kombu as a savoury seasoning. They would harvest and dry the kombu, deep fry it and grind it into a powder to be sprinkled on deer meat; or mix the powder with water to form a paste or sauce. And by the 14th Century, they were trading kombu and other goods with the Japanese, thus introducing this umami flavour into Japanese food. Today more than 95{c33c21346ff5e26ab8e0ae3d29ae4367143f0d27c235e34c392ea37decdb8bed} of Japan’s kombu comes from Hokkaido.

“This trade shaped the food culture of Japan. Kelp is the umami we all talk about in the world as the food of Japan,” said Ie.

Hoshizawa agrees, telling me: “We think kombu is the secret of long life. I eat it every day.”

Hoshizawa is not Ainu but is from Hokkaido and has a deep interest in Ainu food. Her cooking class was part of Slow Food’s Indigenous Terra Madre, which celebrates and showcases indigenous food cultures around the world, and whose Asia and Pan-Pacific edition in October 2019 was held in Hokkaido and hosted by the Ainu community. Recent decades have seen some significant changes for these once marginalised people, culminating in April 2019 when they were legally recognised as an indigenous group by the Japanese government – a major milestone in a country known for its homogeneity.

With much of their culture eradicated after the Japanese government formally colonised Hokkaido in the late 1800s and banned their traditional hunting and fishing, there is now a movement to showcase Ainu cuisine and culture to outsiders, as well as a resurgence of interest in their traditions and ingredients. Our cooking class group eagerly followed Hoshizawa’s precise instructions to make salmon ohau (soup) and inakibi (millet) dumplings, boiling the salmon pieces, rolling the starchy dumplings in ground walnuts and stirring a kelp sauce. It was a fascinating insight into a little-known culinary culture, but beyond these dishes, there is a wealth of other ingredients and techniques that make up Ainu cuisine.

Without Japan’s indigenous people, you wouldn’t have that Japanese taste that’s so famous

While Hokkiado is today best known for fresh seafood (especially urchin and roe) and dairy products, the Ainu cultivated millet, wheat and buckwheat and ate bear, deer and salmon, among other animals and fish. They foraged wild plants, berries and grasses, from acorns to the Alpine leek. And while Japan is known for its love of sushi and sashimi, the Ainu rarely eat raw fish or flesh – it is usually boiled into soup or roasted, with the fish skin and animal hides traditionally used for clothes. Traditional seasoning would be plain – usually salt, kombu or animal fat – with no use of soy sauce or other soy products.

As animists who lived in harmony with the land, the Ainu’s respect for nature formed the foundation of their cuisine’s simple flavours. “Ainu people only eat what is around them,” said Kon. “They don’t pick everything but think about the next year and the year after. They would always leave some part of the plant or tree so it could continue to grow.” They worship many animals as deities and honour their spirits through rituals and ceremonies, their diet is always sustainable with a strong respect for resources and the environment.

Many of the wild plants used in Ainu cuisine have medicinal properties, which are becoming increasingly popular and trendy in Japan and throughout Asia. For example, the characteristically bitter flavours of many varieties of sansai (wild mountain plants), which are eaten in salads, soups or as tempura, are purported to be high in vitamins and minerals as well as polyphenols, which contain antioxidant properties; while the shikerebe berry of the Amur cork tree is one of the 50 fundamental herbs used in Traditional Chinese Medicine, used to clear heat and eliminate toxicity from the body. The Ainu use shikerebe as a general painkiller or to cure stomach ache, viewing it as a “strong” medicine since the seeds will germinate in unfertile ground, even after many years.

Although Ainu food is today mostly found within private homes or at traditional ceremonies, some Ainu ingredients and techniques have been incorporated into Hokkaido cuisine (and vice versa) – although many visitors to the region may not realise their origins. “Under Japanese rule, additional seasonings like miso and soy crept into what was considered a fairly bland cuisine, enabling certain dishes to maintain popularity to this day,” said Jane Lawson, food and travel writer and founder of Zenbu Tours, noting that Ainu-originated dishes existing within the boundaries of the everyday Hokkaido diet include sanpeijiru, a salty soup made with salmon scraps; ishikari-nabe, a salmon hotpot with potatoes, cabbage and miso; and saketoba, dried jerky-like salmon sticks that are a popular snack.

As Ainu culture becomes increasingly recognised, their food and its health benefits are getting the attention of foodies, chefs and restaurants, both in Hokkaido and beyond. “Recent interest in reviving traditional Ainu culture has seen some restaurants serving the traditional cuisine – albeit an enhanced version to make items more palatable for modern tastes,” Lawson explained.

Kon opened Kerapirka restaurant in the Hokkaido capital in May 2019 with the goal of promoting his beloved cuisine. While he serves up traditional Ainu dishes, he also puts twists on indigenous ingredients to entice new customers, such as cooked salmon belly with a kitopiro (Alpine leek)-infused salt; or thin slices of lightly cured deer meat, a prosciutto-style technique honed from his years as a chef in an Italian restaurant in Osaka. His methods seem to be working: Kon says that half his customers are non-Ainu, with an increasing number of international travellers coming (pre-pandemic) to try Ainu cuisine.

Further afield, Chef Shinobu Namae, executive chef at L’Effervescence, a two-Michelin star French-Japanese restaurant in Tokyo, has also been championing the revival of Ainu culture by including traditional Ainu foods and techniques on his menu. His aim: “to do my best to contribute to getting more attention to an indigenous group in Japan”. He replicates their unique kombu powder, for instance – ­but rather using it to flavour meat, “we sprinkle it on vegetables and salads; it concentrates the flavour,” he said.

Meanwhile, back at Hoshizawa’s cooking class, the excited buzz in the room finally started to subside and the dishes were ready to sample. The results were simple but delicious: the heaviness of the millet dumplings was offset by the slightly sweet kombu sauce, while each sip of soup sang with the individual flavours of salmon, potato, carrot and kelp. It was all delectable, but as I was eating, I realised that it was about much more than food. I was tasting a slice of an almost-lost indigenous wisdom that will, hopefully, now start to get the attention it deserves.

Ancient Eats is a BBC Travel series that puts trendy foods back into their ‘authentic’ context, exploring the cultures and traditions where they were born.

If you liked this story, sign up for the weekly bbc.com features newsletter called “The Essential List”. A handpicked selection of stories from BBC Future, Culture, Worklife and Travel, delivered to your inbox every Friday.

It's Time Everyone Learns About Sous Vide 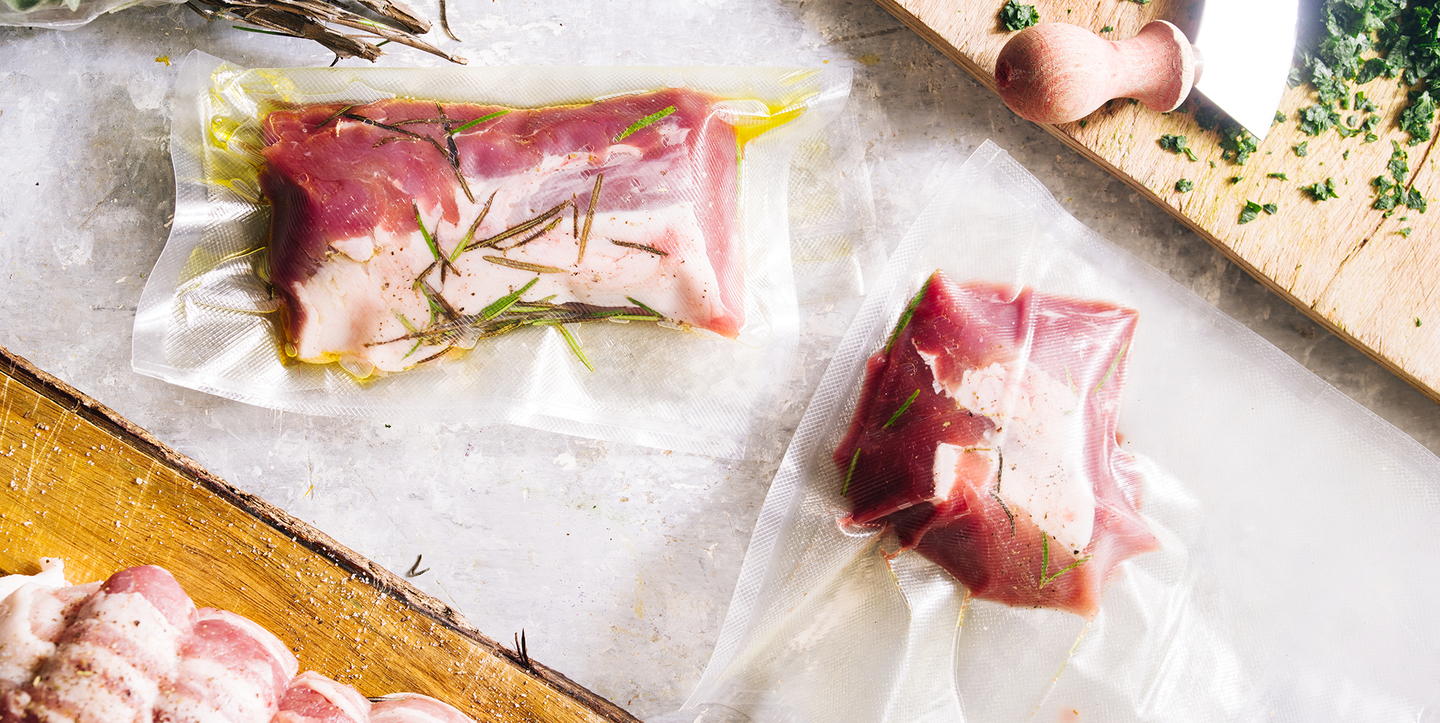