“When have I stopped cooking? That’s the real question,” Brian Leigh, a contestant on PBS’ “The Great American Recipe” said at the start of his cooking demonstration Wednesday at the Stark County Educational Service Center at Stark State College.

The free hourlong event, attended by about 35 people, featured a cooking demonstration and food tasting of two of Leigh’s signature family dishes.

Leigh, an Ohio native, started with a simple recipe: spiced crackers. With a cook time of four minutes and minimal ingredients, he mentioned how easy these crackers are for holiday parties.

The recipe calls for a mix of a neutral oil, canola in this case, plus mini saltine crackers and Leigh’s Something to Beef About spice blend. Once mixed together and baked in the oven for four minutes at 400 degrees, this recipe produces a “beautiful, crunchy cracker,” according to Leigh.

When the crackers came out of the oven, they were passed around for guests to try. I couldn’t believe something so tasty could be so easy to make. I took note, and I’m planning to store this recipe away for future parties.

Guests nibbled away at the crackers as Leigh moved on to his next demonstration, which was a flavorful macaroni and cheese. Before he started, he shared the story of how he and his wife Jenny made this dish and served it at their surprise wedding, which their guests thought was a cookout.

While cooking the cavatappi and making the cheese roux, Leigh took questions from the audience.

Leigh fielded the first question about how he got into cooking and recipe-making with a nod to his family.

“I grew up on a farm in Auburn, Ohio. … My grandmother would make everything under the sun. It was a small jump for me to get into doing my own thing. I always cooked. I was always the one that took over any kitchen I got into,” Leigh said.

As he continued cooking, he told a story of how the kids in his family slept in until 10 a.m. on a Christmas morning, and he was outraged by this. He ended up showing up the next year at 4 a.m. and “started cooking bacon and made some coffee while bumping Frank Sinatra, and they got up.” The tradition continued, and now the kids get up before he does.

The timer interrupted his story, and he added the cavatappi to the roux. He mixed up the order of his ingredients but didn’t fret.

“It’s not a day in the kitchen unless there’s an adventure. It’s still edible — unless it’s not,” Leigh laughed.

Once incorporated, he put the gooey mixture of noodles, cheese and vegetables into a pan, and into the convection oven it went.

More questions followed about his favorite foods to cook — eggs for something easy and pork belly when time isn’t a factor — and about his business, B.T. Leigh’s Sauces & Rubs.

When the timer rang for the macaroni and cheese, the audience was excited and rightfully so. This was the best macaroni and cheese I’ve ever tasted. With sharp white cheddar, mild cheddar, parmesan, smoked gouda, ricotta and edam, a Dutch cheese I had never heard of, this was a cheese-lover’s dream. It also had corn, roasted cauliflower and pickled jalapeños. With a tiny kick and lots of flavor, many guests had seconds — and thirds.

Leigh shared advice with the audience after his misstep with the macaroni and cheese: “Don’t be afraid to fail in the kitchen.”

Following the demonstrations and tastings was a BBQ basket drawing with two winners.

“I am so honored to be competing because I love to inspire and share the culinary traditions that form the basis of my family,” Leigh said in a clip preview for The Great American Recipe.

“We knew everything going into it,” Leigh said of the show, meaning the contestants knew the themes of the episodes and what dishes they would be preparing.

His experience to get on the show was a wild one. He was first approached in 2019 by email, which he thought was spam. He replied anyway and sent an “egotistical selfie video” with his application. He finally heard back in 2021, and by then, he had forgotten all about applying.

Filming took place in September in Virginia, and he wrote 37 recipes for the show. He confirmed that when the show ends, there will be a cookbook with the winner on the cover with recipes from all of the contestants.

The show is hosted by Alejandra Ramos, and the judges are Leah Cohen, Tiffany Derry and Graham Elliot. You can see Leigh and the other nine contestants compete to win “The Great American Recipe” at 9 p.m. Fridays on PBS Western Reserve. The first episode aired June 24. View past full episodes on pbs.org.

Want to make Leigh’s recipe from the first episode? He shared it on his website, btleighs.com, where he also sells sauces and rubs.

Leigh’s love for barbecue blossomed into a business

In 2012, Leigh’s then-girlfriend Jenny wanted a grill. They bought one, and within two hours of setting it up, he had turned it into a smoker. That first day, he made a brisket, and it rekindled his desire to be in the kitchen.

He then cooked for friends, using sauces he’d create. Soon, they were wanting to buy his sauces. Then their families wanted to buy them, and before he knew it, Leigh was catering graduation parties.

He then married Jenny, and they gave away little sauce jars at their wedding. He referred to this as the official launch of B.T. Leigh’s Sauces & Rubs.

“As you can imagine, it was poor choice of words,” states his website.

The couple moved from Ohio to Kentucky and sold at their first farmers’ market on May 5, 2018.

“We’ve branched out beyond traditional BBQ flavors into sauces and spice blends that defy categories, and have been honored by some of the highest awards in the industry,” states his site.

His Clevelander sauce has one many awards, and his Magical Mop sauce is quickly becoming a bestseller.

B.T. Leigh’s can be found in stores in 34 states as well as in the United Kingdom and Honduras. Wholesale orders are welcome.

The site states that new flavor combinations are always in the works, and there are plans to expand into other avenues. The site also offers plenty of recipes to try using the sauces and rubs.

Learn more about his sauces and order them online at btleighs.com.

Thu Jul 7 , 2022
Each morning, Yvonne Fearon, a household worker from Rose Hill in Summerfield, Clarendon, uses one pack of chocolate mix to make tea for herself, her husband, and their twin boys. She’s forced to stretch the mixture by adding sugar, milk, and water because they can’t afford the optimal portion of […] 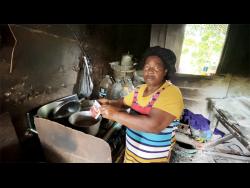