Burlington Beer Company owner Joe Lemnah has announced that the craft brewer will move its taproom, restaurant and barrel-conditioning operation from Williston to Burlington’s South End later this year. The brewery itself will remain in its original Omega Drive location where it’s grown to 25,000 square feet since its 2014 start.

Lemnah said he hopes to open the relocated taproom in July. It will occupy 14,000 square feet of the former Vermont Hardware Company space at 180 Flynn Avenue.

“It’ll be great to put the Burlington back in Burlington Beer Company,” he joked. “We’ll have a more accurate name.”

The building complex, which also hosts a Citizen Cider production facility, is owned by Trey and Dominique Pecor. Switchback Brewing Company is next door at 160 Flynn Avenue.

Dominique Pecor said by email that she and her husband are very excited to welcome Burlington Beer. “180 Flynn is emerging into a fun beverage hub,” she wrote, noting that the brewery business will be “joining the many artisans that have always been a draw in this area.”

Lemnah said he had always planned to open Burlington Beer in its namesake city but had not been able to find the right spot at the right price. “I looked at more than a dozen locations in Burlington between 2011 and 2013 but couldn’t afford to be in town,” Lemnah said.  “I started the whole thing on a bootstrap budget.” 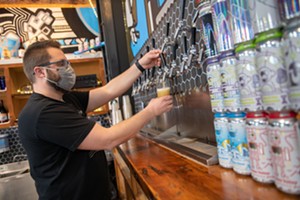 As Lemnah grew his business, the entrepreneur said he continued to dream of opening a taproom and second location in Burlington and kept his eye open for suitable spaces. After a mid-February 2021 article in Seven Days, Lemnah said, “I started getting cold calls from real estate agents.”

He looked at a few different spaces and fell in love with the historic brick building, which the Pecors had been restoring for about a year. The 1902 structure has a deep history. It was built with Drury bricks, which were manufactured in Essex Junction down the road from the house where Lemnah grew up. “I remember finding Drury bricks when I played in my backyard,” he said.

Moving the taproom, retail store and restaurant also frees up space in Williston that will allow Lemnah to add more tanks and double production over the next two years. “It kind of feels like it’s come full circle,” he said. “Guess it all ended up working out.”