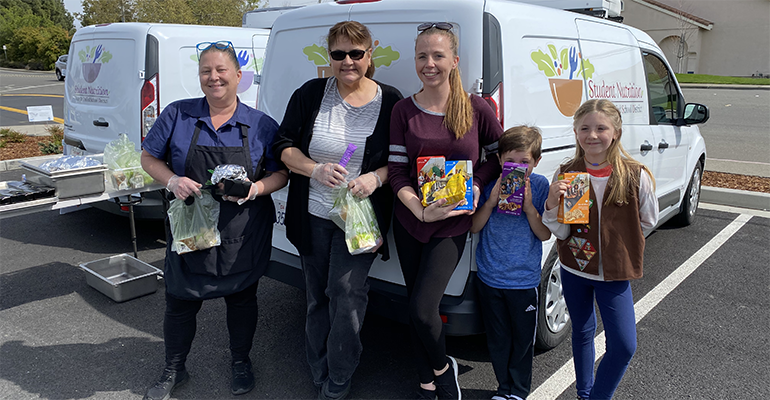 By the start of the coronavirus pandemic, the student nutrition department of Vacaville Unified School District had transitioned two of its heat-and-serve kitchens into scratch-cooking hubs, the better to serve its 13,000 students. They had also forged relationships with local farms and started making progress on nutrition goals, such as limiting sugars.

The combi ovens, tilt skillets, blast chillers and other kitchen equipment and technology they added—plus the time and resources to train staff to use it—are seen by the district as a worthwhile investment, not only for the long term but because it’s helped families weather this unpredictable year.

“In California, we ran into fires. We ran into blackouts. We ran into COVID. And the only thing that’s been consistent is [food]…we haven’t missed a day of service.” Through the universal meal program, the district offers free meals to anyone age 18 and younger.

The district has continued building their program this year. In September, they completed the third—and most comprehensive—kitchen upgrade. They use the refurbished kitchens as cooking hubs, where staff members prepare items such as meats and marinara sauce. Then they ship the prepared food to pickup sites in temperature-controlled vehicles, where meals are packaged and distributed. They’re aiming for a fourth refurbished kitchen in about two years.

Photo: In September, the district converted a third heat-and-serve kitchen into a cooking hub.

“We’re building momentum,” Cordon says. “If we are given the proper tools, then we can slowly start to change the stigma of school food.”

The district is focused on steady improvements. To encourage participation in the nutrition program, the department has “put on a retail hat,” approaching menu creation as if they’re wooing restaurant-goers.

“We’ve had growth every month. We’ve had growth on a daily basis. Students are coming back, I think not only because they don’t have to pay but also because it’s exciting and it tastes good.”

One month, their menu included a tri-tip sandwich with housemade barbecue sauce and citrus slaw on a brioche bun, ribs with broccoli and roasted potatoes, a roasted vegetable and hummus wrap, Asian meatballs over rice and chile con carne with tortilla chips.

Cordon asked other school districts for new recipes at first. But earlier this year, he realized he needed more support—and the freedom to concentrate on the business side of running the meal program. So the district hired a trained chef as culinary manager in late November. 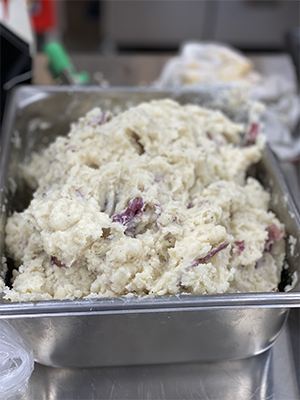 Photo: Last year, Vacaville USD hired a dietitian to help them improve the nutritional quality of meals. In November, they brought on a new chef to be culinary manager.

During the 2019-2020 school year, seeking more input to improve the scratch-cooking program, Cordon signed on with Eat REAL. The nonprofit increases “real food access and education” by providing resources for school nutrition programs across the country, such as school menu audits, ongoing support and an opportunity to earn certification through their organization.

Representatives from Eat REAL say the district was already starting strong, with an innovative, simple rotating menu based on minimally processed foods. The audit suggested the district improve by removing juice from the menu, replacing high-sugar breakfast items with lower-sugar options, removing the à la carte menu and offering more whole grains. They also recommended that Vacaville increase the quality of the meats they serve and transition to biodegradable packaging.

Cordon says they’ve made strides in all of these areas. Last year, the district hired a dietitian to help them continue to improve the nutritional content of district meals. And they continue to expand their relationships with local purveyors—vendors include two bakeries, four specialty food businesses and four farms. During strawberry season this year, they purchased and picked up fresh strawberries themselves so they could include them with to-go meals.

Vacaville families can pick up meals each day during a two-hour block from any of five designated sites. The meal includes lunch as well as breakfast for the following morning. 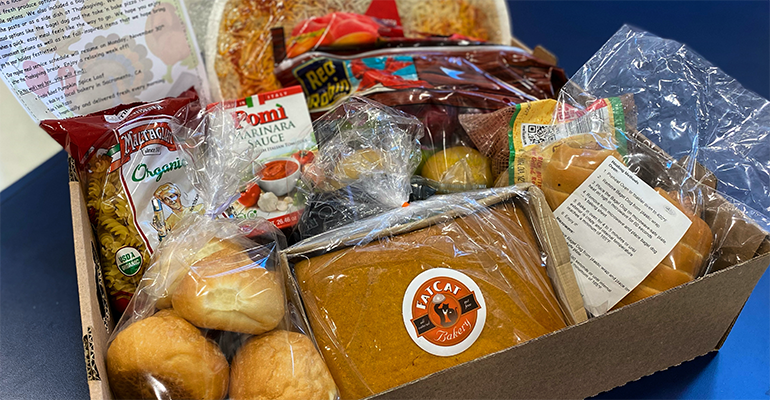 The district has served more than 1.5 million meals during the pandemic to Vacaville students and those from neighboring districts through the universal meal program.

They also offer a weekly meal box option, available for pickup throughout the week. Each box contains a week’s worth of breakfasts and lunches: a combination of ready-to-eat meals and those that require some home preparation.

So far, Vacaville has served more than 1.5 million meals during the pandemic, not only to their own students but also to students from other districts in the area. The universal meal program has allowed Vacaville’s meals to become a community resource. It makes Cordon and his staff proud.

“Our job is to feed the students, right? It gives us a lot of gratification to be able to serve the community.”

Their Restaurants Shut Down. They Got Laid Off. But They All Kept Cooking Through Pop Ups. Don’t feel like cooking? Here’s where to order a Thanksgiving meal in San Antonio