Speaking of home cooking, I was strolling through a cemetery the other day, the historic Graceland on Chicago’s North Side. Holy cripes on toast, you should see the monuments. This one dead guy, Potter Palmer — you’ve heard of The Palmer House Hotel? That’s him — he’s got an actual 16-columned Greek-style temple with matching sarcophagi for himself and his wife, who literally was named Bertha.

Here’s my question: Obviously, Potter (or “Pooter,” as he was known in grammar school) spent 37 tons of cash on his upscale tombstone, but, does that mean he also gets to be more dead than the rest of us? Like, he’s up there in First Class Dead having free Champagne poured over his carcass by the horned and gnashing flight attendant while the rest of us suckers are back in Coach Dead not being able to decide between the chicken cordon bleu and the beef tips. Because we’re dead.

Regardless of our seat location, though, if we’re flying the Airways Styx, we’re all landing on the same runway. And there, since we’re still in “pre-boarding” mode — from my lips to God’s ears — we should spend some time, right now, making ourselves — and, consequently, the world — a better place. “But, how?” you squeak plaintively. “How?”

Why you need to learn this

Aren’t you tired of being you? Jeepers, if I had a nickel for every dejected sigh of resignation I heard in 2020 alone, why, I could spend eternity in corpsey comfort next to Bertha and the Poot. Let’s make 2021 be the anti-2020, then, until it’s so crammed with awesome personal betterment that it explodes like a foie gras goose. And this being Prep School, let’s start with working on your cooking game.

The steps you take

Happily, after a lifetime of experience and no small amount of therapy, I believe I have learned what’s good. Compassion, for one. And nonslip shoes.

But, also an acknowledgment that self-improvement has no limit, and the quest for said is, of itself, good. Let us think, then, on ways to improve ourselves and, by extension, the world, as we at long, long last leave that 2020, that flat and fetid roadkill of a year, receding in the rearview.

Resolution No. 1: Order some carryout. I don’t know if you’ve seen the papers, but, there’s a pandemic. Among its many victims is the restaurant industry. So, here’s one good thing you can do: Find a restaurant you love, then pick up the phone (call them directly — those delivery apps cost them money) and fork over some cash. Once a month would be great, every week if you’re loaded. Those line cooks and hosts, those servers, dishwashers and bussers, lots of them barely scrape by, even in the best of times. Order some carryout. Seriously. Oh, and tip big. Always.

Resolution No. 2: Repeat after me: “I, (state your name), hereby resolve that, with dog as my witness, this year I’ll cook more good food.”

Here’s what’s cool about that resolution: You can emphasize the “cook more” part or the “good food” part. If you don’t already cook a lot, start. If you do already cook a lot, now you can improve your technical skills or expand your repertoire. Learn to move faster or just make your food taste and look like something you’d want to put in your piehole.

Here are three sub-resolutions, for your convenience:

Resolution No. 2A: If you’re the “can’t make toast” type, resolve to cook at least one meal every week. It doesn’t have to be “gourmet” or even “from scratch.” Start small. Make some toast or, better, boxed pasta. (Add pasta to a big pot of salted, boiling water and cook, stirring occasionally so the pasta doesn’t stick, for the time listed on the package.) Then, learn how to heat jarred pasta sauce (Pour sauce into a “saucepan” — those are the tall ones rather than the short, wide ones that are called “saute pans” — and place over medium high heat, stirring occasionally to keep it from scorching.) From there, learn how to make baked potatoes and blanched green beans and converted rice (not instant rice; you may as well eat damp cicada husks). Remember, a journey of a thousand miles starts with something I can’t remember. But, miles, shmiles, you should learn how to cook.

Resolution No. 2B: If you already do your share of cooking, try expanding your culinary horizons. What’s a cuisine you love to eat but have never tried making? Indian? Italian? Israeli? (Do all cuisines start with the letter “I”? Indonesian, Iraqi — I guess they do. Icelandic, Iranian, Irish. Whooooaaaaa!)

Do some research. Find a good book or website on that cuisine. Go to the neighborhood inhabited by people who make that cuisine. Get some carryout while you’re there (See Resolution No. 1). Then, find a grocery store for the spices and dry goods you’ll need to make that cuisine. Start reading and following recipes. Pay attention and respect to the people who grew up making this food, but, don’t obsess over “authenticity.” Even with grandma’s recipe, your beshbarmak won’t fool anyone in Zhezqazghan.

Resolution No. 2C: If you’re a seasoned cook, fess up to your weaknesses. How fast can you dice an onion? Are your knives even sharp? Or, what have you always wanted to learn? How about tossing vegetables in a hot pan like a beast? Put a handful of kosher salt in a cold, dry saute pan — that short, wide one with the slanted sides. With the pan resting on your un-turned-on burner, move it back and forth to make the salt move en masse, like thundering herds of goitered gazelles o’er the semiarid Kazakh Steppes. Next, try moving it forward and stopping it suddenly, so the salt rides a bit up the far side of the pan. Do it again, but this time, when the salt rides up, pull the pan back quickly with a very slight upward wrist flick to make the salt arc lightly backward through the air and back down onto the pan’s surface. Keep practicing until it’s consistent, rhythmic. Next, try it when you’re sauteing onions or the delicious mushrooms in the recipe here.

Bonus Resolution: Practice. Er meh gerd, name one thing you got perfect the first time you tried it. The trombone? Brain surgery? Cooking’s the same way. The more you practice your kitchen skills, the more you make a specific dish or cook from a particular cuisine, the better you’ll get and the sooner it will seem like second nature.

To conclude, my friends, this year, think about how you eat. Support your locally owned restaurants. Make yourself some good food. The world will be a better place. Or, at the very least, because you’re eating something delicious that you made with your own hands that sit on the ends of your arms, the world will appear, if only briefly, to be better than the living hell it is.

Feel free to leave out the booze. The mushrooms are delicious on their own.

Salt and pepper as needed

Place butter in a large, heavy-bottomed skillet set over highest heat. After butter melts, it will begin to foam.

As foam begins to subside, add mushrooms to cover whole pan. Season with salt and pepper and allow mushrooms to sit, undisturbed, until brown on the bottom, 1 to 2 minutes.

Push several mushrooms to the side of the pan to make room, then add garlic into fat and let cook until fragrant, 20 to 30 seconds.

Toss or stir mushrooms until cooked through, about 1 minute.

Remove pan from heat and add brandy. Return pan to heat and tilt to flame brandy. When flames subside, toss or stir mushrooms to coat evenly, then taste for seasoning and serve immediately.

After mushrooms are done, reduce heat to medium and stir in 2 tablespoons flour. Cook, stirring, until flour combines with fat in pan to form a roux, 2 to 3 minutes. Increase heat to high and stir in 1 pint chicken, beef or vegetable broth, making sure to dissolve all roux completely. Heat to a boil, then reduce heat and simmer 10 to 15 minutes to reduce starchy flavor. Remove from heat, add 2 to 3 tablespoons whole butter and stir constantly until butter is incorporated into sauce. Taste for seasoning and serve immediately.

Matt has the 'ladies' buzzing

Tue Jan 5 , 2021
ABC/Craig Sjodin Happy 2021, rose lovers! While the world still isn’t back to “normal” yet, I’m happy to report that one thing remains blissfully consistent: “Ladies” on The Bachelor are still happy to separate themselves from their dignity if it means more camera time. Case in point: ABC This is […] 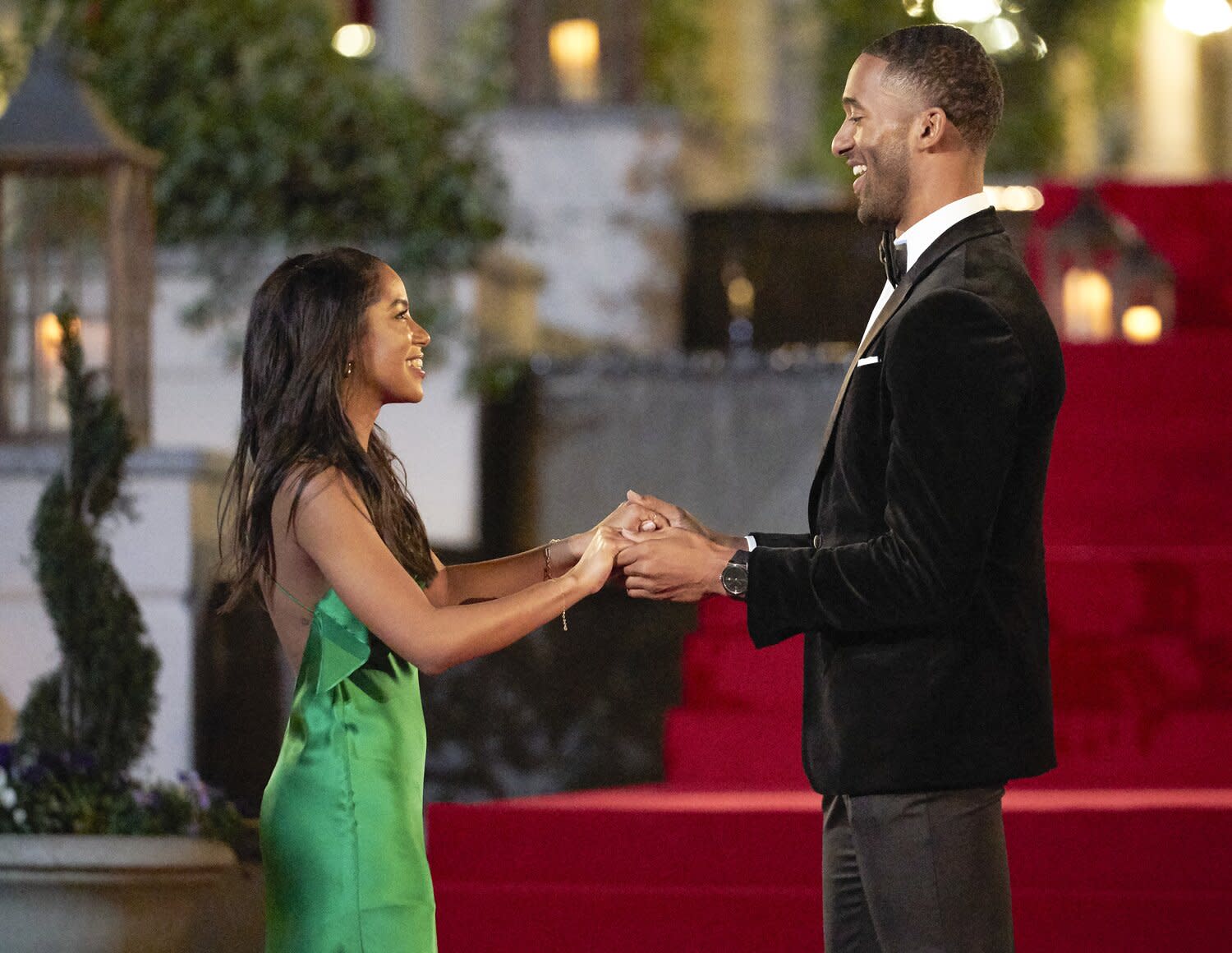