TYLER — As the East Texas Food Bank responds to growing need during the COVID-19 pandemic, the nonprofit organization is preparing for the loss of thousands of dollars in funding due to proposed state budget cuts.

That department has proposed a $1.9 million cut to the Surplus Agricultural Product Grant, which goes toward helping food banks obtain fresh produce from local growers.

The East Texas Food Bank said it will receive $92,373 less in funding, which will result in 738,984 less pounds of produce going to East Texans in need. The funding cut could result in a loss of 615,820 meals.

The East Texas Food Bank serves about 250,000 people in Gregg and 25 other area counties.

The change must be approved by the Legislature when lawmakers meet in January, according to Mark Dallas Loeffler, communications director for the Texas Department of Agriculture.

Loeffler said the department sent letters to grant partners indicating they should proceed as if the cuts were approved.

East Texas Food Bank CEO Dennis Cullinane and other food bank officials are urging the Texas Department of Agriculture and governor’s office to reverse the proposed cuts. He said the food bank was first notified of the change by Feeding Texas, a hunger-relief organization with 21 food bank members, in mid-September.

“This program is a win-win for the state, and a cornerstone of our ability to provide healthy food to Texans during their moments of need,” Cullinane said. “Surely we can find a less harmful way to trim the state budget.”

He said the grant helps those who are hardest hit by the effects of the pandemic — people experiencing job loss and farmers who saw their businesses disappear.

“Why would we cut funding so drastically for a program that feeds (hungry) people and supports struggling farmers,” Cullinane said.

This grant has been used since 2001 as a cost-effective strategy to fight hunger, reduce food waste and improve health, he added.

“Food banks use the funds to acquire fresh produce that is unsellable due to imperfections or market conditions,” he said. “The funds go directly to farmers, offsetting their costs of harvesting, storage and packaging.”

If the cuts are not reversed, the food bank will have to seek ways to offset the lost produce acquisition funding to “ensure that all East Texans have access to the nutritious food they need to thrive or risk reducing its fresh meal distribution.”

Loeffler said the agriculture department had limited options when choosing where to cut the budget because most of the agency operates on a cost-recovery basis, which means most programs are funded through fees obtained from that program.

The small amount of general revenue from the legislature is sent back to the public through grants. As some of the only programs receiving general revenue, the grants saw disproportionate reductions to comply with Abbott’s request, Loeffler said

“There are simply few other places TDA can cut GR (general revenue) spending from our budget,” he said.

Healthy Yogurts That Taste Good, Too

Sun Oct 4 , 2020
Yogurt has always had an enviable reputation as the ultimate health food, which is well-deserved. It’s brimming with nutrients, and there’s evidence that yogurt eaters may have an easier time staying at a healthy weight and have a lower risk of chronic diseases such as type 2 diabetes and hypertension. But […] 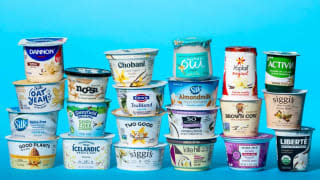