Brooklyn Borough President Eric Adams believes it is time to stop placing Band-Aids on the bleeding vein of food insecurity and, instead, take meaningful actions to revolutionize access to affordable and healthy food.

Adams is scheduled to host a virtual press conference later this morning — Feb. 21 — where he will discuss new proposals regarding the importance of health during this critical time in the pandemic as New York attempts to carve a path to recovery.

amNewYork Metro was given first access to the “New Agrarian Economy: Past, Present, and Future of Urban Agriculture in New York City,” a roadmap Adams is advocating for in an effort to reduce, and eventually, eliminate food insecurities, in addition to creating food-based job opportunities in low-income and black and brown communities.

“Of the many inequities exposed by the COVID-19 pandemic, one of the most glaring lies in our food system,” Adams told amNewYork Metro. “Food insecurity has skyrocketed since the onset of the pandemic, and those who have relied on food banks and grab-and-go meals to feed their families have found that the food they’re being served is highly processed, with little nutritional value. Even before the pandemic, these same kinds of foods have contributed to a disproportionate rate of diet-related illnesses in Black and Brown communities throughout the five boroughs, such as diabetes and hypertension, which are some of the leading co-morbidities associated with COVID-19.”

Adams’ plan focuses on creating agricultural sources within urban communities, allowing for what is commonly referred to as food deserts to receive more nutritious meals. The Brooklyn Borough President hopes to reduce regulatory barriers to urban farming and streamline city agency operations in regard to food procurement.

Developing these green sources allows for nutritional education to be expanded through the creation of hydroponic labs (growing plants, sans the soil, with a controlled medium and water) and rooftop farms above schools.

In doing so, locals can utilize existing infrastructure, such as community gardens and rooftops, in underserved areas.

Adams is a firm believer that health and green education go hand-in-hand. By exposing students and communities to agricultural methods and technology, such as vertical farming — in place of vast amounts of farmland, this method allows plants to be stacked vertically growing through either hydroponics or aquaponics — it helps promote environmental awareness, leading to preservation and a reduction in carbon emissions.

Each of these components creates opportunities to improve the health, education, and skills for a community. Adams’ plan would invest in workforce development opportunities, such as groups like GrowNYC and other existing programs.

It is believed this will help create urban agricultural employment and other careers within the food sectors to underserved youth, and others in need.

Before officially taking this plan to the public through a zoom press conference, Adams shared his thoughts on the dire food insecurities and plans moving forward exclusively with amNewYork Metro.

With the COVID-19 vaccines beginning to reach more and more arms around the city, the plans to maintain health is on top of the menu. Adams believes this is exactly where the road to recovery begins — with a healthy plate of food.

“Diet is the leading driver of disease, and while there have been initiatives to alleviate hunger generally in the City, these attempts have failed to address nutrition in a productive way. I, myself, have seen the revolutionary effects of a healthy diet. When I was diagnosed with Type 2 diabetes, I suffered with an experience all-too-familiar to many Americans — tingling in my extremities and deteriorating eyesight, along with other harrowing symptoms. I turned to nutrition for help, and through following a whole food, plant-based diet rich in fruits, vegetables, whole grains, and legumes, I was able to reverse my disease,” Adams wrote in the “New Agrarian Economy” report.

The pandemic exposed deep wounds within the New York City’s urban communities, who prior to the COVID-19 crisis were experiencing food droughts — locations with limited resources to fresh produce — and compromised employment and housing.

Now, almost a year later, New York City is experiencing the highest unemployment rate it has ever faced. The limited access to healthy food has increased certain areas likeliness to suffer from diabetes, heart disease, and other underlying ailments that are extremely sustainable to death from COVID-19 complications.

“Our recovery must revolutionize the way we think about food in this city, which is why I’m proud to release this report, putting forward a series of concrete steps on how we can unlock the potential of urban agriculture in our city. Not only will this improve public health and mitigate the damage wrought by future pandemics, but it will also aid our economic recovery, providing a new source of tax revenue and employment for New Yorkers,” Adams told amNewYork Metro.

The Brooklyn Borough President also affirms that there is no concrete plan in sight to help with relief. Currently, Adams highlights that New Yorkers are relying on GetFoodNYC Emergency Home Food Delivery program, New York City Department of Education (DOE)’s Office of Food and Nutrition Services (OFNS) school-lunch program. He feels that by investing in urban agriculture, it will help uplift low-income and black and brown communities by creating nutritional education, sustainability, and work opportunities.

“I thank all the advocates, scholars, and industry leaders, for their input, and look forward to translating these proposals into concrete action that will transform our urban landscape and ensure every New Yorker has access to quality food,” Adams said. 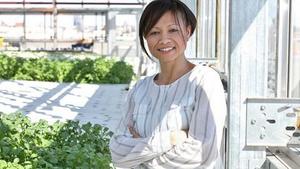