‘It’s very … sloppy. Are you sure that’s not too much milk?” I’m attempting to make my grandma’s ground-rice cake, and am talking to her, my head crooked to support my batter-splattered phone. The mixture looks like a milkshake. Nevertheless, I persist, determined to master at least one of my family recipes.

Convinced that the rise of veganism, 15-minute meals and Instagram-led cooking would render old recipes irrelevant, I feared for my own culinary heritage, and for that of other cultures. Sure, we all have family recipes we get misty-eyed over – but how much effort do we make to learn how to cook them?

A fair bit, if you’re Anastasia Miari and you have spent the past two years interviewing grandmothers for a cookbook called Grand Dishes, which will be published next March. What started with her asking her Greek grandmother for recipes escalated quickly when she and her co-author, Iska Lupton, realised they were part of a larger trend. Although she understands – and once shared – my concerns, she has noticed a movement “in the opposite direction. People want to think back to the processes our grandmothers were using.”

Indeed, far from running counter to our growing concerns about meat consumption, many family recipes hold the answers. “Fifty years ago, meat was scarce and expensive,” Miari points out. “So family recipes are often of a piece with people thinking more about how to make the most of animals – eating nose to tail.”

The Ukrainian chef Olia Hercules agrees. “Ukrainian peasants couldn’t afford to kill an animal more than once a week,” she says. “They ate vegetable-based dishes, using bits of meat for flavour. If people are turning to a more sustainable way of eating, it absolutely fits in with that.” Plus, recipes are adaptable. Although she eats meat, her husband is vegetarian and her family has recreated treasured dishes so that he can also enjoy them. Yet even plant-based dishes aren’t immune to the threat that has faced family recipes in recent years: lack of time.

In 2014 the writer Vicky Bennison started a blog called Pasta Grannies when she noticed the art of making pasta was not being learned by younger generations. “Italian women (and men) these days are far too busy to spend time in the kitchen,” she wrote. Her fear was that pasta-making would continue only in professional kitchens.

It was the same impetus that drove Hercules to dedicate her latest cookbook to the outdoor kitchens that are – or were – a common feature of Ukrainian homes, the “summer kitchens” from which it takes its name. Yet while some young Ukrainians are “converting or getting rid of their summer homes and moving more to convenience cooking”, many are following her recipes for ferments, pickles and bread. “I think, in lockdown, people had more time to experiment – and in doing it, have realised these old recipes aren’t that laborious,” she says. There’s new technology – food processors, rice cookers and pressure cookers – that has transformed Indian cooking, says the chef Romy Gill – but there is also “the mindfulness trend”, says Miari. “It’s cool to take the time to prepare food as your grandmother would have done.”

Although the fashion for resurrecting old recipes and techniques was under way before the pandemic, it accelerated during lockdown. Distance invariably makes the heart – and stomach – grow fonder; it wasn’t until she moved to the UK, aged 15, that Hercules took an interest in Ukrainian cooking. “Perhaps if I’d lived all my life there I wouldn’t have bothered.” After all, family recipes aren’t just fuel; they are history, a source of continuity and comfort. “I can go on Instagram and find a great curry – but when I cook my mum’s lentils and chorizo, it contains the memory of being a kid,” says the acclaimed Spanish chef José Pizarro.

“Growing up in West Bengal, I didn’t cook – but when I moved to this country, cooking our food was something that saved me,” says Gill. “I think there is a generation that was more about convenience – but my teenage daughters want to learn.”

When the Pig hotels launched its cookbook last year, “the recipe for our CEO’s mother’s rice pudding got the most comments, with people talking about their family puddings,” says the chef Angela Hartnett, who serves as director on the board of the hotel group, and has drawn extensively on her Italian culinary heritage during her career. She agrees with Miari that there has been “a big resurgence in people cooking family recipes”. Yet she recognises that the osmosis by which she learned her mother and grandmother’s recipes is unlikely to happen in an age when families are more socially and geographically fragmented.

“Our grandmothers are the last generation of women who didn’t record their lives like we do,” Miari says – which is why their knowledge is not always immediately accessible. Trying to decipher what a grandmother meant by “a couple of glugs of oil” or “it’s done when it feels right” was the hardest part of compiling recipes for Grand Dishes, says Miari. That is something I can relate to. Yet when it emerged, my grandma’s dense, golden ground-rice cake was better than anything I could have Googled: in feeling as much as in flavour.

Thu Aug 20 , 2020
A single mom who committed to cooking at home during the coronavirus pandemic to protect the health of her daughter with lung disease has now cooked over 200 meals for her family and started her own food business. Yolanda Latimer’s daughter, Savannah, was born a micro-preemie at 23 weeks, weighing […] 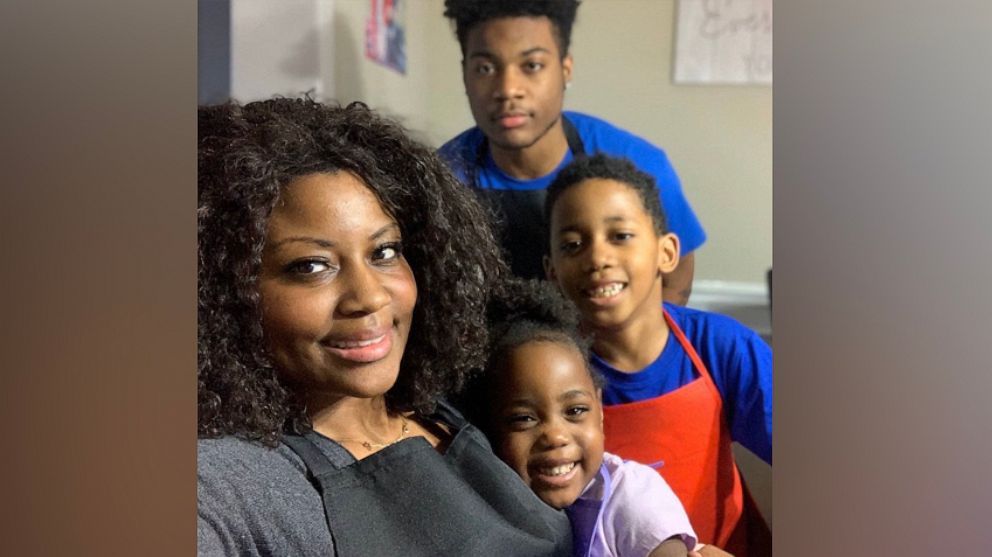