Households have been warned that the UK’s “golden era” of cheap food is over, as official figures published on Friday pointed to the toll of the cost of living crisis, with two in five people buying less food to get by.

The former Sainsbury’s boss Justin King said shoppers now faced hard choices over how to spend their money as the financial shock, caused by the war in Ukraine, pushes up prices on supermarket shelves.

“We have been perhaps through a golden era,” said King , a senior figure in the retail industry who also sits on the board of Marks & Spencer. This would now have to change, he added, with people forced to rethink priorities in their family budgets.

“I suspect what we will see is a higher proportion, across the piece, spent on food for the longer term.”

His concerns were echoed by senior figures across the retail and farming industries, as households prepare to weather a surge in inflation.

Economists believe official statistics next Wednesday will show that overall prices increased 9% in April, while the Bank of England is forecasting the rate will pass 10% later this year, the highest since 1982.

The head of the British Retail Consortium (BRC), which represents all the major supermarkets, agreed that “consumers are in for a difficult time”. Global food prices are at a record high, propelled by growing energy and transport costs, as well as an extremely tight labour market, its chief executive Helen Dickinson said.

Fierce competition among supermarkets has so far limited price rises on essential products, but Dickinson said pressures in the food industry “do not look to be easing anytime soon”.

The cost of living crisis is already forcing people to make big changes. Two in five adults are buying less food when they go shopping, according to the latest public opinions and social trends survey published by the Office for National Statistics (ONS) on Friday. The figure is double the reading at the start of 2022.

Nine out of 10 of the adults polled told the ONS their outgoings were higher this month than last. When they were first asked, back in November, just 62% of adults said this was the case. The three big worries were food and energy bills, and the price at the pumps.

People were cutting back spending on non-essentials, trying to use less power and heating, and avoiding unnecessary trips in their cars. They had also started shopping around more to find the cheapest prices. Two in five did not think they would be able to save any money in the next 12 months.

Runaway prices were forcing people to make some “really horrible financial decisions”, said Sarah Coles, a senior personal finance analyst at Hargreaves Lansdown. The number of people having to spend less on food was “alarming”, she added. “It’s no wonder that a third of us are so anxious.”

Coles said the ONS survey showed “alarm bells ringing over food”. “The proportion buying less is growing, and while this will include some people who are giving up expensive treats or cutting down on waste, there’s a real risk that some are having to go hungry.”

Research for the Guardian by price analysts Assosia last month showed big jumps in the cost of everyday foods, with the price of basic pasta up 45%, tinned tomatoes and eggs up by 13%, and dog food up by more than 40% in the past year. Official data points to a near-20% rise in the price of a pint of milk.

Food producers, from pig farmers to cucumber growers, have been warning for months that a surge in the cost of energy and basic commodities, such as wheat and cooking oil, was pushing up their costs and they would have to be passed on.

Last week, the National Pig Association said four out of five producers would go out of business within a year unless their finances improved, with farmers losing in excess of £50 a pig. Hundreds of egg producers are also facing collapse as rising fuel and energy costs were exacerbated by the additional cost of keeping hens indoors during a bird flu outbreak.

Minette Batters, the NFU president, said egg, chicken and pork producers were among those operating at a loss due to soaring farm costs. The price of energy, fuel, feed and packaging were all “spiralling upwards”, she said. “For all of these input costs, whether it’s packaging or feed, we’re seeing rising inflation. It is costing more, a lot more, to produce the food than it can be sold for.

“The question is how we receive fair returns for everybody and make sure that the consumer can still afford to buy,” she added. “The danger is, if you put all of these costs on to the consumer, are they going to be able to afford to buy it?”

King told BBC Radio 4’s Today programme that supermarkets could not be expected to absorb the extra costs entirely or protect consumers from rising prices, despite having announced higher earnings. Last month, Tesco and Sainsbury’s reported a doubling in their annual pre-tax profits to £2bn and £730m respectively.

“The headline profit numbers are of course large in the context of any household budget,” King said. “But the margins in supermarkets are around 3%. So even if supermarkets made no profits at all, they wouldn’t really be able to make a huge dent in the cost inflation that is coming through the system.”

The war in Ukraine has added to problems that were already building up in the food industry due to upheaval caused by the pandemic and Brexit as well as crop issues linked to the climate crisis. The recent heatwave in India and dry spells in parts of the US, for example, both of which are large grain producers, have contributed to surging wheat prices around the globe, alongside the squeeze on exports and reduced production in Ukraine.

Richard Griffiths, head of the British Poultry Council, which represents producers behind 85% of the chicken sold in the UK, said he couldn’t see “an easy way for food prices to come down again”.

“We have seen cost of production increases that mean we are expecting to see food inflation at 15%,” he said. “It’s not just energy prices rises, it is increases in feed costs and labour, the effects of Brexit on trade. If it is was one of those it may be manageable and recoverable, but as it is all of them, it makes life increasingly difficult.”

Sat May 14 , 2022
To make the Swiss rolls, preheat the oven to 180C/160C Fan/Gas 4. Grease and line the 2 Swiss roll tins with baking paper. In a large bowl, beat the egg and sugar together with an electric hand whisk for approximately 5 minutes or until light and pale. Using a metal […] 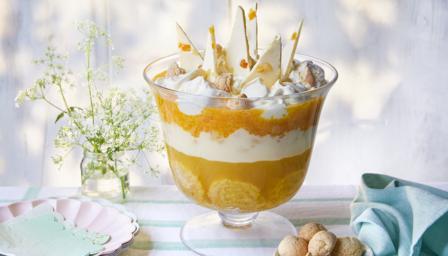