Food Network fans who want to go to Flavortown don’t need to turn on their TVs to Diners, Drive-ins and Dives anymore: Guy Fieri’s Flavortown Kitchen is coming to you, delivering cheeseburgers and fries to parts of Allen, Frisco, Southlake and central Dallas.

Earl’s aim is ”to continuously turn out different brands, portraying nearly every food genre,” he says.

Each company within Virtual Dining Concepts is a ghost kitchen, meaning the cooks make and package the food in a commercial kitchen, then give it to a delivery driver. Ghost kitchens are growing exponentially across the United States and range from family-owned pizza joints to major corporate operations. Earl takes the big-chain model, then adds one key element: celebrity.

Partners like Fieri “have huge brand recognition,” Earl says, and that drives sales. 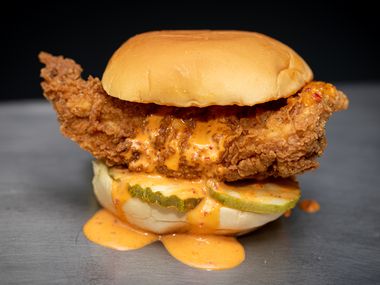 For Fieri fans within delivery range of the five North Texas kitchens, they will find an eclectic smattering of menu items like bourbon brown sugar barbecue wings, the Crazy Cuban sandwich, chicken “Parm-eroni”, and macaroni and cheese. You can hear Fieri saying the name of his S-M-Cheesesteak Egg Rolls: That stands for Super Melty Cheese.

The most popular item is the bacon mac and cheese burger. Yes: The macaroni and cheese comes on the burger.

The first Flavortown ghost kitchens in Dallas-Fort Worth launched in early February. The team has since added a few more.

“Dallas has historically been a testing ground, very fertile,” Earl says. He points to chains like Dallas-based Brinker International, which operates Chili’s and Maggiano’s Little Italy, as an example of how big brands can flourish.

Earl says ghost kitchens will continue to develop across the country, in part because the coronavirus pandemic encouraged consumers to stay home and order delivery. His ghost kitchens are located in existing restaurants — not that it matters, since customers will never visit.

“The restaurants are our distribution points. They’re doing all the food, the packaging. … When the consumer goes to order, they are not focused on, physically, where it’s coming from. And that is the growing trend,” he says.

If you're a vegan or curious about it, here's where to eat in Chattanooga

Thu Apr 15 , 2021
With more dairy companies adding almond milk to their lineup, McDonald’s testing a McPlant burger and Chipotle carrying Sofritas (tofu burritos), vegans are rejoicing as their options multiply. What exactly is veganism? Unlike vegetarians, who forgo meat but may eat dairy and eggs, vegans do not consume any products derived […]