“Southern food is indigenous food,” says Ryan Hubbard of soul food and barbecue joint Red Hub Food Co. “You start with Native American influences, and you have basically a melting pot over the course of the next three centuries—African, French influence, even the Great Britain influence.”

Early U.S. Southerners of all ethnicities—but perhaps none more than Black Americans—embraced technique over high-end ingredients at a time when it was a necessity, creating what is known today as soul food.

“Soul food can be an acquired taste,” says Jeanetha Douglas of JBD Mobile Catering & Events. But it’s also the taste of family—of large, low-cost meals designed to fill folks up and bring them comfort.

“This time of year is our most successful,” says Shaun Jenkins of Soul Food Joint on Market Street. “People come in and say, ‘this is Thanksgiving early.’”

Who better, then, to ask about the best preparations for Thanksgiving staples—the gravy, the stuffing, the turkey, the pie—than our local soul food standouts, the folks who make the dishes darn near year-round.

For the best slatherin’ sauce, Shaun Jenkins says to keep it simple. “Meat makes its own gravy. You don’t have to add much to it.”

For his own T-givin’ spread, Jenkins says turkey gravy is a must. That means collecting the meat’s natural juices as they run off the bird, adding a thickening agent—he prefers good old-fashioned flour—and your own blend of herbs and spices.

“Especially for a person like me, who likes the white meat, I love to have some of that gravy over the top of my turkey,” Jenkins says. “I can’t give you the exact recipe—that would be my mom’s recipe, of course.”

Stuffing—the most controversial of holiday meal mainstays. Cook it in the bird or separately? White bread or cornbread? Sausage or vegetarian?

Angelic Jenkins of Angelic’s Kitchen goes in for the best of both stuffed worlds, making her dressing on the stovetop and finishing it inside the turkey cavity.

“It comes out of the oven, and it is perfect—looks beautiful, the crispiness hanging out of the turkey,” she says. She also insists on chicken broth, never water, for her stuffing, as well as parsley, onion powder, and butter.

Douglas goes all in on direct-to-turkey filling. She prepares her stuffing studded with giblets instead of the ubiquitous sausage, and it goes straight into the poultry pocket. “You have to get all those juices and flavors together,” she says. “And it keeps your stuffing from drying out.”

Okay fine, you should probably put something green on your soulful Thanksgiving table. But no one says your veggies can’t be cooked in pork fat or swimming in cream sauce.

For Angelic Jenkins, the indispensable Thanksgiving extras include fresh collard greens, stewed for a full 24 hours in chicken broth with a ham hock (she makes a vegetarian version for her food truck), diced onions, and top-secret seasonings. “Everybody at home thinks I’m crazy,” she says of her full-day preparation. She grabs fresh instead of canned vegetables for her turkey day green bean casserole, combining the quick-blanched beans, Campbell’s cream of chicken soup (other folks can keep the cream of mushroom), fried onion strings, onion powder, and olive oil, and popping it all in the oven ’til gold and bubbly.

Shannon Campbell of Croby’s Urban Viddles agrees on the fresh green bean front, though hers are slow cooked with fatback, salt, and pepper, and mounted with butter and bacon. “Spending time with my family cleaning and snapping the beans is almost better than eating them,” she says.

Shaun Jenkins’ ace in the holiday hole? Deep-fried deviled eggs. “We like to put a spin on things,” he says. “We started deep frying deviled eggs. It’s not exactly soul food, but everyone loves them.”

It seems most of the soul food chefs around town oven roast their turkeys. With the right combination of time, temperature, and basting, everyone believes they have the secret to the perfect bird buffet.

For Douglas, that’s a liberal amount of seasoning, a quick blast at 375 degrees in a convection oven—for “a little crisp on top”—then down to 350 for about four hours of occasional basting. (The convection process of circulating heat around the meat speeds up the cooking time.) Shaun Jenkins recommends liberal amounts of butter: “Rub that thing down,” he says.

If you want to go outside the convection box, Hubbard suggests smoking your holiday fowl. He starts a 48-hour wet-brined turkey and “a really nice smoker” loaded up with wood.

“To be able to brine the turkey and put it on the smoker—that smoked flavor is just so different from what you get out of the oven,” Hubbard says. “Cooking it slower, it just holds the moisture inside and gets that pinkish-purplish smoke ring. It’s one of those things [where] you can see the difference.”

Hubbard recommends a 225-degree smoker for turkey, and says the wood is critical. Red Hub Food Co. sticks with hickory and oak for its workaday beef and pork, but mixes in fruit woods like apple and cherry for smoked turkey. The fruity smoke stands in for some of the citrus and apple you might see in oven roasted fowl, lending a vibrance and acidic punch.

Hubbard’s last tip? Don’t worry about holding your turkey at temp surrounded by ripping wood smoke the entire cooking time. The smoke imparts most of its flavor in the first hour, he says, so if you lose your hardwood coals or can’t hold 225, don’t fret. Feel free to transfer it to the oven.

Hubbard wraps his birds in foil after an hour and a half to maintain moisture and ensure even cooking—kind of a brisket-style approach. “There is a misconception that the smoke is going to be involved the whole time,” he says.

Campbell has one last tip: Don’t be intimidated by new recipes, techniques, and flavor combinations for the holidays. Tradition is important, but don’t get stuck in a rut.

“Just try it a week before Thanksgiving so you can perfect the recipe,” she says. “Also, don’t be intimidated by a fancy sounding name. My mom gave me her chocolate cake recipe that included ganache. I didn’t think I could make that. I’m not a formally trained chef. But I Googled, asked a million questions, then just rolled up my sleeves and got cooking.”

Red Hub Food Co.’s Ryan Hubbard suggests
you smoke your holiday turkey this year.
“Cooking it slower, it just holds the moisture
inside and gets that pinkish-purplish smoke ring,” he says.

You can feast on Cinnabon frosting by the spoonful. Here’s where to buy pints of it

Wed Nov 18 , 2020
The Daily Beast Delaware Teens Lured a Classmate Into the Woods—Then Murdered Her With a Baseball Bat: Prosecutors A Delaware teenager has been charged with murder after allegedly luring her classmate into the woods and beating her to death with the girl’s ex-boyfriend, prosecutors said.Annika Stalczynski, 17, was arrested on […] 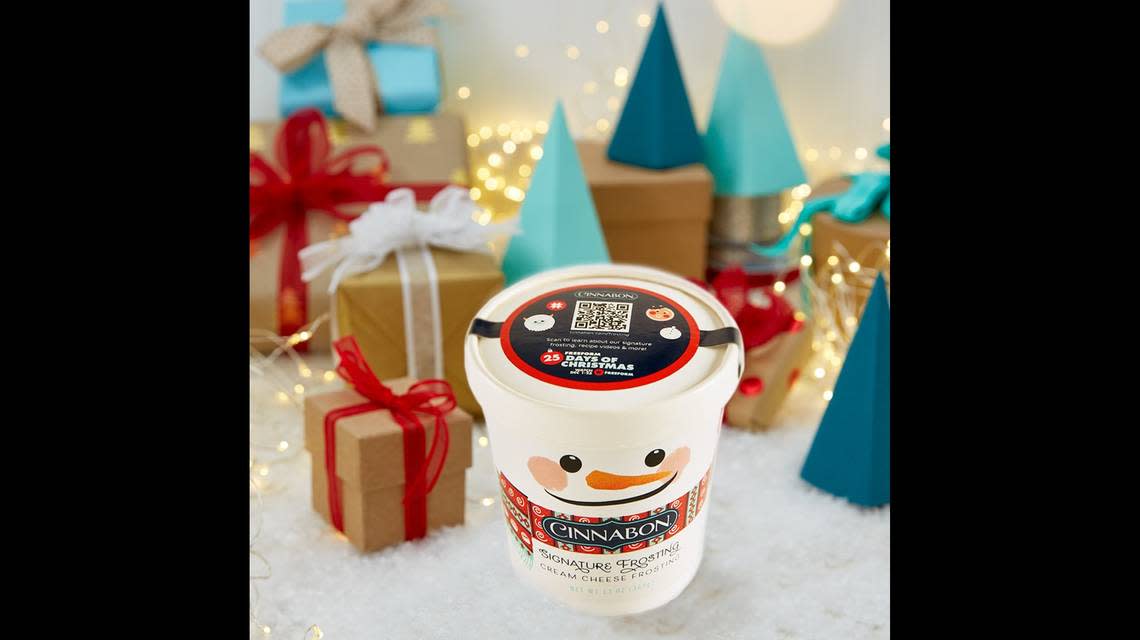