When I went vegetarian in 2014, I had my share of ups and downs. At first, I survived mostly off of my favorite trio: rice, beans, and sautéed greens. But a few months in, that combo got old. My canned bean fatigue was real, but I never felt satiated without loading up on them.

I found myself bored, frustrated—and worst of all, still hungry. But over the years, I’ve learned more and more ways to eat a plant-focused diet that’s both delicious and satisfying.

If you’re just getting started as a vegetarian or vegan, or you’re trying to make your diet a little more sustainable, I’d love to help you jump ahead of where I was back in ‘14. To that end, I recently spoke to six chefs and cookbook authors who’ve mastered the art of vegetable-focused cooking. Here are their best tips for easing in.

When you’re just getting started with plant-based eating, figuring out the protein situation can feel like a huge hurdle. “I think it’s because the idea of the plate model is so ingrained,” says Martin Nordin, author of Fire, Smoke, Green: Vegetarian Barbecue, Smoking and Grilling Recipes. “It’s like the first thing to do is find a substitute for where the meat usually sits.”

Once you throw that idea out the window, and focus instead on bringing together an assortment of different textures and balancing the flavors in your meal, you’ll find a lot more freedom. “I use a lot of legumes and make them a part of whatever I do,” he says. “It could be in an emulsified sauce, or fried for crunch, or just cooked as a soft contrast to more crisp vegetables.”

A protein-rich sauce is one of my favorite moves for an easy vegetable-focused dinner. I char whatever vegetables are sitting around my kitchen, and serve them over a bed of salted yogurt, creamy hummus, pureed beans—or, my ultimate favorite: lemony whipped ricotta.

When I’m craving a creamy dressing for grains, greens, or heartier vegetables, I turn to a trick I learned from Bryant Terry’s Vegetable Kingdom: The Abundant World of Vegan Recipes. He blends silken tofu right into a creamy ginger dressing with citrus, Dijon, and garlic. The tofu becomes super-silky, offering a nicely mellow base for all of the tart, pungent, and savory flavors of the other ingredients.

Cutting the meat out of your cooking is a chance to fully reconsider which ingredients deserve the spotlight. If you’re big on broccoli, try this melted broccoli technique from Sheela Prakash. In her new recipe, she cooks the broccoli down until it transforms into a chunky, savory sauce for pasta.

If you love the bite and sweetness of scallions, don’t just use them as a garnish—let them star in a dinner of pajeon, the crispy, savory Korean scallion pancakes that are loosely held together by a thin batter. If you don’t have scallions on hand, you can use the same technique with garlic chives, ramps, or thinly sliced hot peppers, carrots, and onions.

Season vegetables the way you would meat

The herbs, spices, and rubs you’d normally use for meat have a place in vegetarian cooking, too. Love a good lamb fry? Carry those spices into spiced eggs with tzatziki or stuffed sweet potatoes with curried chickpeas. Into jerk chicken? Take that seasoning blend and put it in a creamy potato salad or collard green-wrapped tofu.

If there’s one cooking move that’ll really make your life as a vegetarian better, it’s learning to make truly crispy tofu. Diala Canelo, author of Diala’s Kitchen: Plant-Forward and Pescatarian Recipes Inspired by Home and Travel, likes to cut extra-firm tofu into cubes and marinate them in sesame oil, harissa, soy sauce, and spices before pan-roasting them in a cast iron skillet. “It has to be cast iron—you won’t the the same crispy, golden results in any other pan.”

And, if you want really crispy pieces of tofu, take a block of extra-firm tofu and squeeze the liquid out over the sink and break it into craggy, uneven pieces before seasoning and roasting them in the oven. Those craggy edges provide more surface area that gets exposed to the heat of your oven. (Wondering [which tofu to buy]? We have tips on that, too.)

A little burnt can be a good thing

Canelo explains that getting the most flavor out of vegetables isn’t always about what you add to them, but how you cook them. Her advice: skip boiling or steaming—instead, cook your vegetables in ways that char them and bring out their natural sugars. “Think of cooking techniques that are commonly used to flavor meat, like grilling, braising, and roasting.”

Nordin agrees: Charring vegetables is a great way to naturally amp up their umami factor. He loves to do this with big, dense heads of cabbage—cutting them into wedges and placing them on the grill, or simply throwing them whole on the embers, and letting the outsides get a bit blackened while the insides get sweet.

You can use the same method with root vegetables and eggplants, too. May I suggest burning an eggplant and mixing it into butter, as Olia Hercules does for this summer toast?

Nordin also incorporates lots of fermented foods to layer brightness and savory flavor into his vegetarian cooking. “I use them in everything from soups to sauces to stocks,” he says. He leans on miso in particular, he says: “In sauces and when frying food. I even use it in my kimchi paste as a substitute for the seafood-based ingredients.”

Wondering how to boost the savory side of your meatless meals? We asked five of our favorite vegetarian chefs and cookbook authors for their moves. Adding olives to vegetable stock is just the beginning.

And when in doubt, there’s Canelo’s other piece of advice: Add garlic, lots of garlic, wherever you can. There’s a reason sinangag is one of my favorite foods: it’s all about the crispy fried garlic chips, which get tossed with just-cooked rice and garlic-infused oil.

And crispy garlic’s not just for rice: as Sami Tamimi and Tara Wigley explained in their recent story about adha, it’s the perfect addition to hummus, stuffed vegetables, stews, and more.

But peak-season produce doesn’t need much…

Produce is at its very best right now, so it’s an ideal time to embark on some truly simple vegetable-based cooking. The kind of cooking that simply consists of slicing tomatoes and putting them on a plate—but don’t forget to season.

Chetna Makan, author of Chetna’s Healthy Indian: Everyday Veg and Vegan Feasts Effortlessly Good for You, reminds us that some vegetables and pulses are so flavorful on their own that they just need a simple companion to really shine. She likes to “add the tiniest bit of salt to sweet things and a tiny bit of sugar to savory things,” she says. “A touch of lemon or lime to finish off some veg is such a great way to get that balance right.”

Layer on the lentils

Cyrus Todiwala, author of Simple Spice Vegetarian, likes to incorporate multiple proteins into one dish. He points to dhaansaak, a classic Parsee dish, as an example: “Dhaan refers to the caramelized onion rice, flavored with star anise, and saak refers to the lamb cooked with lentils. Traditionally,” he adds, “seven different lentils are used together along with a host of vegetables that are then pureed together, and then blended with the lamb. Each of the lentils is different and has its own qualities.”

He explains that different lentil varieties differ significantly when it comes to flavor. They also offer different amounts of protein, and some, like urad daal, are starchier. “Collectively they form a smooth, creamy texture,” he says, with more complex flavor than a single variety would offer. Of course, you can apply this same idea while eliminating the meat.

A dehydrator is your secret weapon

David Lee, chef and co-founder of PLANTA in Toronto and Miami, touts the super-concentrated flavors of dehydrated veg. Start by playing with any vegetables you like, smoking them in a Big Green Egg, “or dehydrating them to get the most concentrated sweetness,” says Lee. “Dehydrated mushrooms are my go-to; local chanterelles, morels, you name it.”

You can start by purchasing pre-dried mushrooms, but Lee finds it fun to make his own, using a small dehydrator to make a big batch to use in dishes like risotto or pizza. His hot tip: Grind dehydrated ingredients into dust for adding to pho broths, noodles soups, and dumpling filling. These dusts, he says, are the ideal sneaky pops of flavor.

Let nostalgic flavors be your guide

Ditching meat doesn’t mean you have to forget about the food you’ve always loved. In fact, you should do the opposite. Tal Ronnen, chef and owner of Crossroads in Los Angeles, reminds new vegetarian cooks to dig into nostalgic flavors: “Think of your meatless ingredients not as a constraint, but as an opportunity to get really creative. King oyster mushrooms can turn into a baked mushroom ‘scallop,’ and cured heirloom carrots can become ‘lox’ to top the perfect breakfast bagel.”

He recalls the spiced-meat stuffed pastry cigars his childhood nanny would make for special occasions. He’s reworked the recipe to use Impossible meat at his restaurant: “It is really exciting to translate familiar flavors into dishes that don’t use meat or dairy,” he says. “Food memories are powerful, and they are often the inspiration for what and how I cook.”

It’s okay to ease in gradually

According to Lee, the best way to start a plant-based lifestyle is to not think of it as a drastic change. Begin by cutting out red meat, or even just eating a vegetable-based meal once or twice a week. (If you’re looking for recipe ideas that focus mostly on vegetables, but still include some seafood options, too, our COOK90 meal plan might come in handy.)

“Do it gradually! That way you can see how your body responds to the change,” Lee suggests. You just might love how you feel.

The Pies Are Masterpieces. Behind Them Is Maya-Camille Broussard's Fight Against Food Insecurity.

Fri Sep 11 , 2020
Photo credit: Lindsay Widdel/Justice of the Pies From Esquire You’d be hard-pressed to find a Black woman cooking on the executive level in Chicago right now. Black women are invisible to the point that they’ve had to open their own restaurants, catering services, and pastry shops to get even the […] 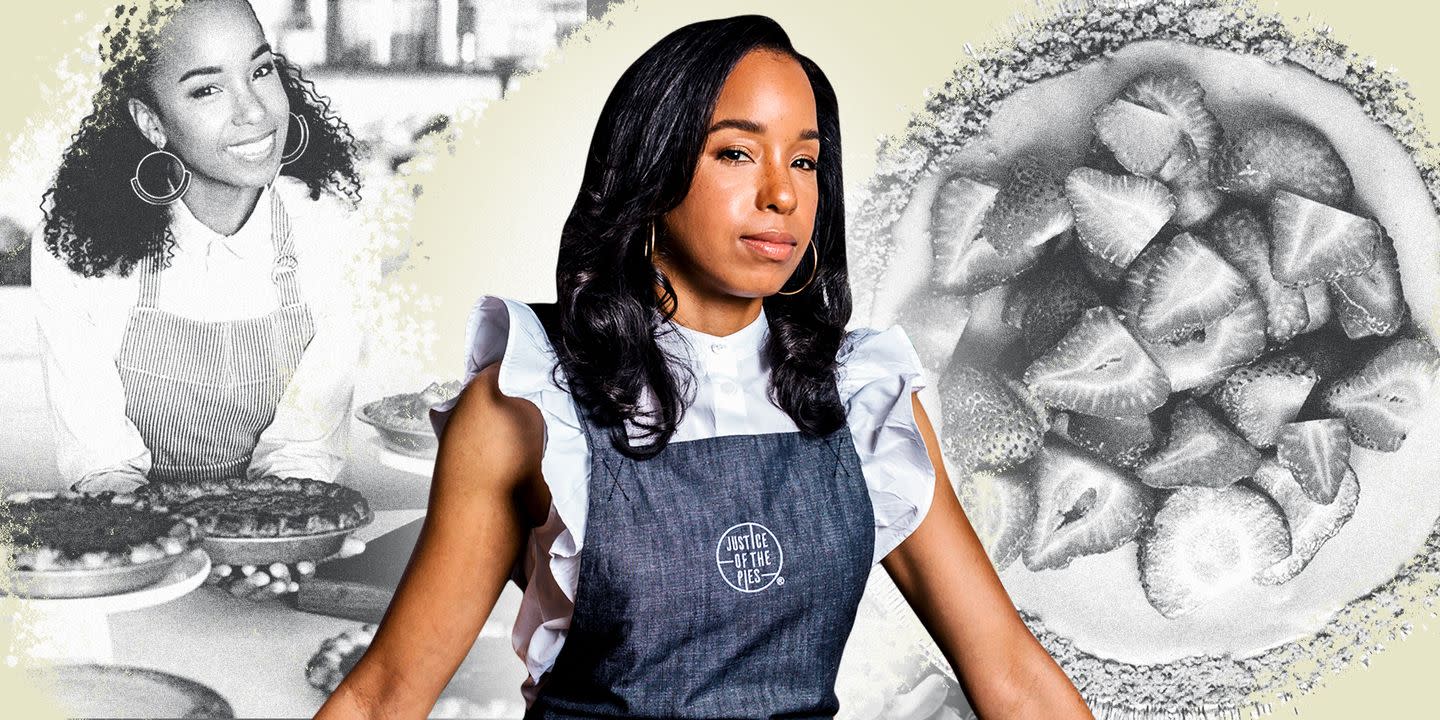