Over 200 users commented on the video, many in support of a vegan diet, others not so much.

“Child services please,” one user wrote. “If that baby ever develops any health issues because of that, you’re guilty of child abuse — you’re incriminating yourself,” another said. Yet another: “Bro They can die if they don’t eat meat.” The video was since been removed.

“I know that it’s something I would have wanted as a child,” Rose said in an interview. “I would love to have never eaten an animal, as I love them so much, and that is something I wanted to give my daughter the opportunity to do.”

As more adults adopt vegetarian diets (which cut out meat) and vegan diets (which include no animal products) experts say the trend includes more children and young people. But, as TikTok commenters proved, many are unsure if this is a healthy choice.

Jen Trachtenberg, a pediatrician at Carnegie Hill Pediatrics and a spokesperson for the American Academy of Pediatrics, confirmed that a number of her young patients are skipping animal products, especially when their parents cut out these foods. “More and more families are interested and asking about the health benefits of vegetarian and vegan diets,” she said.

Plant-focused diets have been found to reduce incidence of heart disease as well as some cancers. Plus, in 2009, the American Dietetic Association concluded that a well-planned vegetarian or vegan diet was safe for people at every stage of life — including for pregnant and nursing moms, children and babies — with the caveat that fortified foods or supplements can “provide useful amounts of important nutrients.”

The 2021 study, which looked at 187 healthy children ages 5 to 10, found that those on vegan diets had lower levels of body fat and the unhealthy form of cholesterol, as well as less nutritional deficiencies. But those children were also, on average, about 1.2 inches shorter than non-vegans of the same age, had some vitamin deficiencies, and measured at about 5 percent lower bone mineral content.

The researchers wrote: “Our data suggest that restriction of animal-based foods could prevent children from achieving optimal height or bone mineral status and could lead to selected nutritional deficiencies.”

Reed Mangels, a nutrition adviser for the Vegetarian Resource Group, which promotes and educates on vegetarian eating, said she isn’t concerned about growth rates, especially when it comes to Americans.

“A concern with research conducted in other countries is that conditions may not be reflective of those in the U.S. — less information available, limited fortified foods, limited alternatives to meat and dairy products,” Mangels said. “Studies in the U.K., Taiwan, Germany all find that vegetarian, including vegan, children grow at rates not significantly different from nonvegetarian children.”

Still, experts say it’s important for parents to recognize that children do have different food needs than adults. “Toddlers need, per kilogram of body weight, more micronutrients compared to adults,” said Liisa Korkalo, lecturer in the Department of Food and Nutrition at the University of Helsinki, whose research has looked at the diets of children. “They need a nutrient-dense diet.” With small stomachs and limited intake capacity, the food small children eat really needs to count.

Mangels said that vegetarian and vegan children sometimes have lower levels of vitamin B-12 (which keeps a person’s blood and nerve cells healthy), calcium (which builds and maintains strong bones), vitamin D (which helps the body absorb calcium), iron (which makes hemoglobin and myoglobin), and zinc (which supports the immune system and is needed for the body to make proteins and DNA).

Trachtenberg said she suggests a “plant-based” diet to her patients, which limits the amount of meat and animal products without completely cutting any of these foods out. Still, she said that true vegetarian and vegan diets can meet all of a child’s needs, with one stipulation: “It needs to be well-thought out and monitored with either a pediatrician or registered dietitian.”

A vegetarian or vegan lifestyle can be difficult for children and teens to maintain, said Lauren Crosby, a pediatrician at La Peer Pediatrics in Beverly Hills, Calif., who estimates that at least 5 percent of her young patients, especially teens and tweens, are vegetarian or vegan.

“Some kids think they want to be vegan or vegetarian until they learn what that actually means and what they need to eat regularly to support their growth,” she said. “Plant-based is a good way to see if they will, or can, actually make gradual changes that are not as extreme as these other diets can be.”

Crosby also said she tries to get her vegetarian and vegan-interested patients to stick with a “middle ground” of plant-based eating until the child is done growing. (Which is usually about age 16 for boys and 15 for girls.)

Similarly, Korkalo said she suggests a “flexitarian” approach for children, where a parent organizes a child’s diet without firm restrictions. She used the example of a vegetarian child who wants to try a beloved family recipe that includes meat.

“From a food culture point of view, it can be important that, as a child, you get to taste your grandmother’s famous recipes,” she said. “You can have a really healthy diet, with lots of vegetables, lots of legumes, whole grains and fruit. You can still be flexible and let them eat a little bit of everything every once in a while.”

Still, some parents aren’t interested in plant-based or “felixitarian” philosophies.

Joanna Draus, a mother of three in Catalonia, Spain, and author of “Your Vegan Kid,” was living in Warsaw when she turned to a meatless diet. She said her interest in a meat-free lifestyle started in the 1990s. And as the years passed, she raised her daughter vegetarian as well. By 2004, Draus went full vegan and decided to raise her twin boys, born in 2007, the same way.

“I’ve realized that veganism is not only a more ethical choice but also a much healthier one,” Draus said.

Unfortunately, this mom said that raising vegan kids wasn’t easy, citing societal pressure and limited food options at school. Plus, she complained that her doctors in Poland didn’t always encourage her choice in the 1990s. Still, she says things got better as the years passed.

“What happened in the 2010s is that more and more people started to understand the meaning of the word ‘vegan,’ ” Draus said. “I was lucky to find a very good and experienced pediatrician in Barcelona. She had no idea about veganism, but was supportive and open-minded. When she met my sons, the first vegan patients she ever had, she only asked me if I knew what I was doing and how to provide them with adequate amounts of calcium and protein — those two were, and still are, perceived as hard to get on a vegan diet.”

Draus says things have gotten even easier in recent years. “There are many resources and the public perception has shifted, from thinking that vegans are weirdos to looking at us with respect,” she said.

After all these years, she’s glad she stuck with it. “I believe raising your children vegan benefits them in many ways. I can see it in my twin sons who have been vegan all their life,” she said. “These days, my children are influencing their friends.”

Since Rose uploaded her video with Oak last month, she has posted a number of TikTok videos in response to her many online questions and critiques.

One video featured Rose responding to a question about whether babies need calcium from milk products. In the post, she dances under the text: “There’s just as much if not more calcium … in most plant based milks.” In response to the comment, “Bro They can die if they don’t eat meat,” she danced under the simple caption “This is … not true.” She even posted a video referencing the recent study from Poland and another recommending plant-based protein sources.

But it seems Rose isn’t opposed to her daughter straying from the vegan lifestyle one day. In yet another video, she responds to a comment from a TikTok user: “would you support her if one day she asked for meat?” Much like her original post, Rose holds her daughter as she dances and smiles under her message: “As soon as she is old enough to understand where it comes from … She can decide for herself.”

When asked, Rose says she still feels just as strongly about raising her daughter vegan. “I don’t let people’s opinions sway me on things like this,” she said. “It’s something that’s really important to me and getting hate doesn’t change anything about that.”

Sun Feb 13 , 2022
John Isner is competing at home this week at the Dallas Open, which is being held at the Styslinger/Altec Tennis Complex on the campus of Southern Methodist University. The American, who is into the quarter-finals, lives within walking distance of the venue. A food aficionado, he is certainly familiar with […] 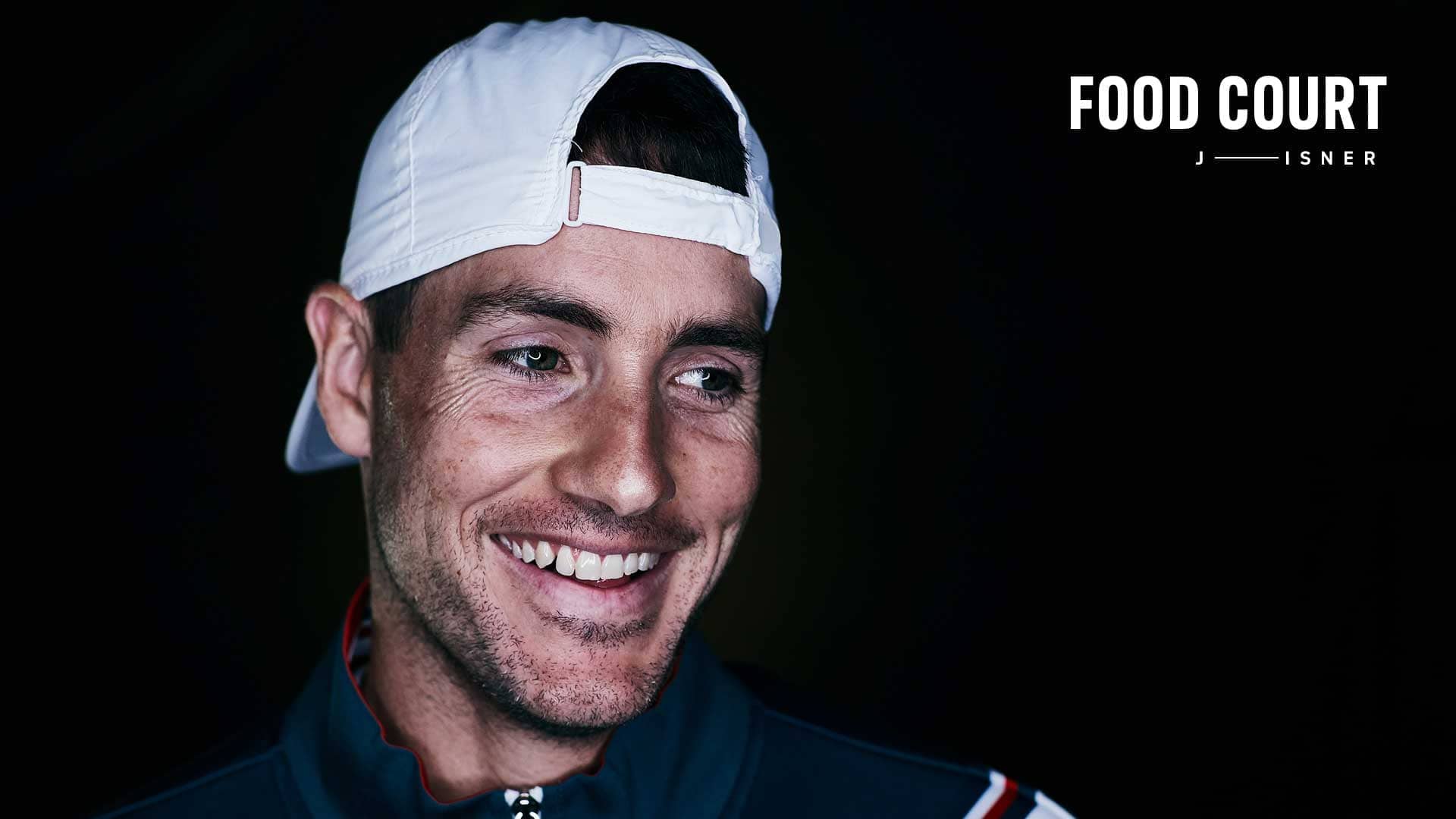