Something very strange happened. I have found myself agreeing with something that Boris Johnson said. Or at least, some of it.

Carrying excess weight appears to increase the risk of coronavirus complications and – with more than 60 per cent of adults in England now overweight or obese – supporting and encouraging healthy weight loss seems a good idea.

I’m also glad to see some acknowledgement in the government’s proposals that tackling obesity can’t be a one-size-fits-all approach: as well as measures aimed to encourage healthier food choices, money is to be invested in the training of “weight-loss coaches” to advise on diet and lifestyle (although it will be interesting to see whether mental health services also receive much-needed additional funding to help those with eating disorders).

But I stopped short of applauding the proposal to add calorie counts to restaurant menus, the suggested ban on advertising of fast-food before 9pm and the move to reduce our temptation to pile our trolleys high with treats by banning bogof offers on chocolate and crisps. Why? Because there really isn’t any point.

Sure, knowing that a korma has 500 more calories than a vindaloo at my local Indian restaurant might inform my food choices slightly, but let’s face it, if I’ve decided to order in a takeaway I’ve already chucked the idea of a healthy choice out of the window – at least for the evening.

The same applies if I decide to work my way through a multipack of crisps in front of the TV – I’m not tucking in because I’m under some illusion that the onion in cheese and onion counts as one of my five a day; and I’m not crunching through the calorie-laden crisps because they’re cheaper than a banana or an apple. Because they’re not.

We may be erring on the side of chubby, but we’re not stupid. People already know that a box of jelly babies is pretty much just sugar in disguise. But you know what? When they reach for their favourite comfort food, they simply don’t care.

In its extreme form, this behaviour needs proper mental health support. But for most, treating ourselves to something we fancy occasionally is fine. Either way, the point is that when we tuck in to the brightly-coloured packets we know exactly what we’re doing.

If the government is to step in, I’d argue that it’s far more important that we address the enemies in our midst. Our supermarkets are stacked high with Trojan horses – calorie laden food masquerading as anything but. Because while it could be argued that each product we buy is labelled with its calorie content, most of us buy into the highlighted claim on the front of the packet rather than inspecting the small-print.

And I can’t help but feel that those products that play-up their healthy credentials and sweep other information under the carpet must have a part to play in the obesity crisis.

This was highlighted to me recently when I watched a programme about a well-known chocolate manufacturer producing a version of their product that contained less sugar. It emerged during the course of the programme that the original bar actually contained not many more calories than the new, virtue-signalling version. Whilst reducing sugar should be applauded, it’s important to realise such changes don’t necessarily lighten the calorific load.

Elsewhere in the supermarket, products marketing themselves as having “no added sugar” are suggesting to trusting shoppers a major benefit. But in the small print, it is clear they may not have added sugar per se, it doesn’t mean it isn’t already there in a natural form.

Red flags for me personally also include phrases like “lighter taste” (so not particularly lighter in calories then?), “contains real fruit” (while the percentage might not be what you think) or “fat free” (but full of sugar, flavours and bulking agents). In fact, the more a product tries to highlight its healthy credentials, the more I wonder what it might be hiding.

Hands up, I’ve struggled with my eating in the past. And in the process gained such a comprehensive knowledge of calories that I can probably estimate the value of most meals on sight. My relationship with food these days is much healthier – but I continue to look at labels from time to time. Partly because I’m a control freak, but mostly because when it comes to food manufacturers I like to see the truth behind the hype.

But my overzealous knowledge of nutrition is far from the norm (nor should it need to be) and it upsets me that overweight shoppers trying to do the right thing might well reach for a fruity yoghurt purported to help their digestion, not realising it has more calories per serving than a two-finger KitKat. (And you know what? If you’re anything like me, treating yourself to a bit of chocolate when you fancy it will leave you feeling satisfied, whereas a pot of strawberry yoghurt might not hit quite the same spot).

Even back-packet labels seem designed to confuse. Careful of ones that state a pretty low level of calories per “serving” and make sure you know exactly what they feel “a serving is.” Clue: it’s probably less than you think.

Clearly, food manufacturers want their product to sell. And whatever the USP of their particular foodstuff, they’re going to wear it loud and proud on the packet.

However, if the government are going to step in to remove our special deals and helpfully inform us that a plate of fried chicken isn’t as healthy as a salad, perhaps they ought to look more at the food marketing that encourages our children to strengthen their bones with processed cheese or munch “reduced sugar’ (but still sugary) cereal rather than enjoy a (lower calorie) choccy digestive. Or more radical still? An apple.

These days, my general rule of thumb is this. If it looks too good to be true, there’s probably a catch. If it’s low fat, it’s probably high sugar. If it’s sugar-free, it’s potentially packed with artificial sweeteners. If it’s claiming to be “light” remember your interpretation of the word may not be the same as the copywriters who created the label. And don’t get me started on granola.

Sadly, when it comes to shedding a bit of weight, the magic solution we’re all waiting for doesn’t exist. And yes, those of us who need to shift a couple of pounds do probably need to be encouraged to make the right choices.

But if these choices are unclear – if, when it comes to weight-loss, we’d have been better off reaching for our favourite treat than the purportedly healthy alternative – then even the most well-intentioned of us don’t really stand a chance.

Sat Aug 1 , 2020
Louise Hagger Chicken nasi goreng – nasi goreng ayam I’ve been eating chicken fried rice for as long as I can recall and it’s a dish of which I never tire. This version of nasi goreng is my absolute favourite. The galangal and white pepper give it a good amount […] 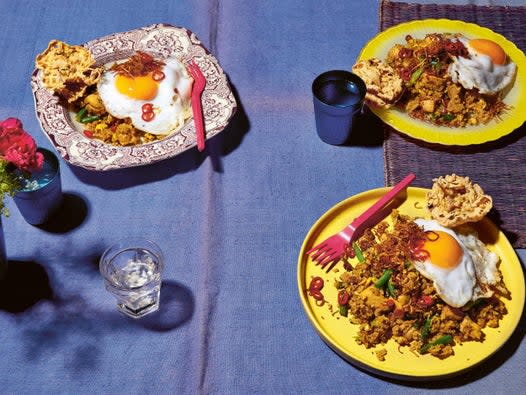