CINCINNATI, Ohio—With many people across the state struggling to figure out where their next meal might come from, one food truck in Southern Ohio is trying to solve that problem.

Typically when you go to get lunch at a food truck you have to pay. But at Unbelievabowl, it’s a donation based food truck that has a mission to get healthy food out into the community and to all demographics.”

Brandon Whitaker started Unbelievabowl just eight months ago. His goal was to bring healthy food to under served communities.

“We believe that a healthy diet shouldn’t be based on your zip code or your socioeconomic status,” Whitaker said.

Whitaker serves up Bowl style meals in a donation-based food truck. The meals are a way to connect with those in need and show them healthy eating is attainable.

“You can eat healthy at home for less money,” Whitaker said. “It tastes great. It doesn’t take a long time to do. So we’re trying to combat a lot of different problems with this new concept.”

But for Whitaker, he didn’t see a global pandemic coming. And since he already works week by week, never knowing if he can afford ingredients, it’s been a difficult few months.

While grants and donations have been hard to come by these days, Whitaker was able to receive some help from multiple donations and a grant from Sam’s Club to get through the last few months.

“The grant money has just been gobbled up by bigger organizations that are more established,” Whitaker said. “Leaving little start up guys like me to fight for everything I can get.”

And for customers that have also been hit hard by the pandemic, they hope to show their appreciation sooner rather than later.

“When things turn around and I have a steady income, I wouldn’t mind donating,” Seth Specktor a customer said.

Whitaker says despite Unbelievabowl being so new, he’s hopeful that he’ll be able to get out to more communities in the Cincinnati area in the near future.

Sat Jul 25 , 2020
By Maridith YahlNKyTribune health reporter Kentucky farmer Michelle Howell is passionate about providing fresh food to all, no matter their income. Recently, on a webinar hosted by the Foundation for a Healthy Kentucky, Howell discussed how her farm, Need More Acres Farm in Scottsville, which she owns and operates with […] 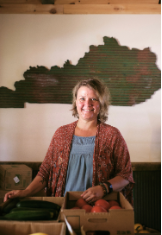