Words like “pioneer,” “visionary,” and “empire” have all been used by the press to describe Jessica Koslow, the owner of Sqirl in Los Angeles’s Virgil Village. Koslow opened the restaurant in 2012, serving breakfast and lunch, and the spot quickly became famous for things like rice tossed in sorrel pesto, but especially for its toast, which was thickly spread with ricotta and topped with the jewel-toned house jam. Koslow would be nominated for James Beard Awards, as Best Chef California and for her first cookbook, Everything I Want to Eat: Sqirl and the New California Cooking. At the end of 2019, she opened Onda, a more dinner-oriented restaurant, with Mexican chef Gabriel Cámara of Contramar in Mexico City. This summer, her second cookbook, The Sqirl Jam Book, will be released. But the coverage won’t be as predictably laudatory. In fact, it will probably stink. One might even say it will have the stench of mold.

Thanks to an anonymously run Instagram account called “sqirltruth,” the world at large has become privy to Sqirl’s once-hidden practice of not just scraping up to two inches of mold off buckets of house jam that had been prepared in a way eschewing food-safety regulations, but also that staff were forced to work in a prep kitchen kept hidden from the health department where said mold was spread by a fan. However, the mold, while a tantalizing story in and of itself, was only an entry point for workers to let the world know that being an employee of Koslow’s wasn’t as bright and rosy as it had been depicted in the press.

One major point that workers have brought up is that there was not enough credit or compensation given to chefs of color who were responsible for some of the creations that made the restaurant famous. Ria Barbosa helped to open Sqirl in 2012 as chef de cuisine, and she stayed on at the restaurant until 2014. She had no job description — she’d answered a Craigslist ad — and hadn’t signed an NDA “or any documents saying ‘any creations were the property of Sqirl,’” she says. Yet it’s many of her house recipes, which she willingly handed over when she left the job, that are present in Koslow’s first cookbook — without attribution.

In a statement to Refinery29, Koslow takes issue with the claim that she never gave proper credit to her staff. “The hype around Sqirl eventually touched everything about Sqirl. But I never wanted that spotlight all to myself. Every opportunity I got, I shared credit with the Sqirl team: in press, on social media, and by nominating cooks for awards,” she says. Javier Ramos, once chef de cuisine, for example, won a Rising Star Chef honor from Starchefs in 2017, and numerous pastry chefs had their work featured in the press.

Koslow also notes that the hype surrounding the restaurant buoyed all of its workers’ careers. “At the same time,” she says, “that hype, with its drawbacks, served everyone at Sqirl: I had access to serious cooking talent, and those cooks got lots of eyes on their work. And they deserved it all.”

“But,” Koslow continues, “the truth is that this conversation is a trap when you start talking about ‘who exactly decided on a pesto over a sauce’ or ‘how exactly did Sqirl’s way of cooking bacon evolve over time’? Anyone who has ever worked in a collaborative kitchen knows that splitting those hairs is a bad faith exercise.”

And yet, the problems go beyond credit grievances: It was also her management style that some took issue with. Balo Orozco, who worked in catering at Sqirl starting in 2016 and took the chef de cuisine position at Onda last year, says the mold was only the tip of the iceberg — there were roaches not taken care of, and the ice machine was placed near the flour storage and would constantly grow mold itself. While these issues were repeatedly brought up to Koslow, nothing was done about them, indicating an attitude of hostile neglect which extended to how she treated staff requests for meetings.

“Every time someone would ask for a raise, she would just stop talking to you, like being kind of passive aggressive,” says Orozco. “You didn’t have the chance to say, ‘Hey, can we actually keep talking about this?’ There was no way to have a constructive conversation with her.” When he agreed to work at Onda, he asked Koslow whether she would agree to manage the operation differently than she had Sqirl, by not undermining his recipes or his authority over the kitchen. She agreed, but he says he would come back from days off to find the menu radically altered. When Onda opens again after the pandemic, he won’t be working there.

For Elise Fields, who worked at Sqirl from January 2018 to June 2019 as a baker, there was a lot of disillusionment with ideas she’d had about how it would be to work at a woman-run restaurant. She was put in the secret prep kitchen where there was no ventilation, but says that she didn’t suffer anything in comparison to the chefs of color whose recipes were not properly credited beyond social media tagging.

“Personally, in my time there, I never once saw her cook a single thing,” says Fields. “I’m not kidding. Outside of working the [expediting] station on the busy brunch days so all the tourists and influencers could get their photo of her for, you know, quote-unquote working on the line, that was the only time she was ever in the kitchen, and it was just to touch the final plates before they went out. She didn’t cook in the kitchen with her chefs.”

When problems are as pervasive as those at Sqirl, it’s worth asking: Was any of this known by the people describing Koslow as a “pioneer” and “visionary,” with an “empire”? What’s important to realize, especially in light of the experiences of her former staffers, is that those words aren’t inherently positive. They connote gentrification, single-mindedness, and control. Restaurants don’t run on the perspective and work of one person alone, yet that is often how the media presents them: the brain-children of their chefs, so creative and unique. As chef Kate Telfeyan wrote in The New Republic, this approach creates “the toxic celebrity chef,” whose workers become servants of not just the chef but of the hype the coverage has created.

From Koslow on the West Coast, to Abe Conlon at Chicago’s Fat Rice, to Trigg Brown at Brooklyn’s Win Son, reports of abusive, dismissive, and thieving behavior by chefs and owners make it clear that treating staff poorly is not the exception but the rule in the food service industry. And the media, historically, has only made an already unbalanced and inequitable situation worse.

“Hype is an added pressure for staff,” says Lillian DeVane, a service industry worker and co-host of FOH Pod, a podcast about working in restaurants. “Our pride in your work is further diminished by the required worship of the brand, of the message. It’s not hospitality; it’s advertising. You probably make decent money (from a front-of-house perspective, of course); the people you deal with are noticeably worse the ‘better’ the restaurant you work in; your bosses are probably richer and own multiple places; and you eventually ask yourself why you worked so hard if this is the alleged top. It gets worse the higher you go. If you value your career in hospitality, you’ll put up with a lot to stay at a ‘good’ restaurant.”

Daniela Galarza, a former restaurant pastry chef and staff writer at the Washington Post, tells me that this moment has taught her that when it comes to covering chefs, she should “antagonize them before I celebrate them.”

In a statement, Jessica Koslow responds to the idea that hype and attribution were an issue at the restaurant:

“Nearly everything at Sqirl evolves in the talented hands of the people who work, and have worked, in our kitchens. And I have always tried to foster that sense of freedom and play and change. But cooks move on, and they take their ideas with them, as they should. I am the constant; I am the only person who has been in the Sqirl kitchen since day one. I don’t have a single investor, so I incur 100{c33c21346ff5e26ab8e0ae3d29ae4367143f0d27c235e34c392ea37decdb8bed} of Sqirl’s risk. Hype or no hype, whoever else may come or go, I am the chef of Sqirl.”

If any good comes from the visibility of the bucket of moldy jam and the monarchical environment that spurred it, it will be the recognition of the responsibility writers have not to play king- or queen-maker with people who, at the end of the day, are just bosses.

Like what you see? How about some more R29 goodness, right here?

There’s No Money In Working Anymore

From The “Grateful To Be Here” Generation: Sorry

Why Keeping Politics Outside Of Work Is Outdated

30 Birthday Cake Recipes That Are Actually Easy to Pull Off

Wed Jul 22 , 2020
Everyone’s birthday should be special, and baking a cake with plenty of love is a great first step. But let’s face it: We’re not all exactly professional bakers. Before you start trying to sculpt that fondant unicorn you saw on Pinterest, let’s try something a little more realistic. Here are […] 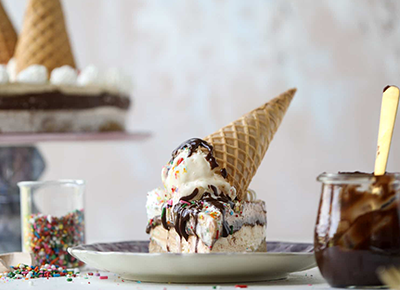