Hosting dinner events was an essential part of our household when I was a young. I grew up in Kandahar city in a predominantly Pashtun region of Afghanistan. My paternal grandparents were from tribal Pashtun areas in Afghanistan, and their families spread around the country. My mother’s side was more of a mix and my maternal grandmother was Iranian-born and raised in Tehran, so I really grew up with many cultures.

It was expected that women would cook while living in their parents’ house, and it was considered obligatory in preparation for marriage. My father was a doctor, so many people knew him and would unexpectedly visit our house for dinner gatherings. I remember my mother gladly accepting any guests and cooking up a storm for them.

I was raised during the reign of the last king of Afghanistan, King Mohammad Zahir Shah. That time, 1933-73, is considered one of the most advanced periods in Afghanistan’s history. Infrastructure, education and women’s rights all advanced with women also being given the opportunity to vote. These freedoms continued until the late 1990s, with the Taliban’s occupation.

I grew up in a rather large family, the second eldest of five sisters and two brothers. My paternal and maternal sides both have massive families too. We moved around a lot, because of my father’s profession. Doctors in Afghanistan usually travelled around different states to study and work.

I was raised in a very strict household. My mother was the disciplinarian and Aunty Homa, who I lived with for a year in Kabul city, was too. We weren’t allowed to visit friends or have them over, we weren’t allowed to go out to the movies or to dinner gatherings. This was the norm for most women in Afghanistan; not many young women had access to the outside world unless they were with their family.

At certain stages of my life, I pushed the boundaries. I would secretly attend rallies to protest and I would give speeches at major gatherings. And this is how I was spotted at a gathering by my father-in-law. I was giving a speech at an army gathering and my father-in-law, who was a general, was in attendance. He asked around as to who I was and which family I was from. Then he attended our house and asked for my hand in marriage for his son!

This was considered the norm in Afghanistan in the early 1980s when I got married. It has changed drastically over the years as young men and women decide to get married to whomever they wish, without parental pressure, but it is still prevalent in certain tribal parts.

I had never met my husband until he came with his parents to my house to ask for my hand in marriage. My father was over the moon. He agreed to the marriage and because I was so close to my father, I willingly said yes. I had an extravagant wedding, with more than 1,000 people because of my father and father-in-law’s positions in Afghanistan.

A year later, I gave birth to a beautiful daughter. And within a few months, my father and grandfather passed away. That was the hardest thing to deal with and it still haunts me today, 40 years later. I was 25 years old and I still cry every time I hear his name. My youngest sister was eight and it was heartbreaking watching her grow up without him.

After the passing of my father, I found comfort in my father-in-law’s house. I was treated like a daughter and not a daughter-in-law. My husband’s family is also quite large so the dinner gatherings were massive. Once married, I took the responsibility of entertaining guests. Because I had learned how to cook at home, the task was not that hard.

After the Soviet attack on Afghanistan, my husband and I decided to leave. My mother and a few of my siblings had already gone to Australia, so we were sponsored and left Afghanistan in the hope of a brighter future for our kids.

Now, I attend my children’s houses and am entertained by them. My daughter Nasreen is passionate about food and about human rights. Sometimes when I look at her, I feel she has the same fire that I had within me.

Narange palow is a dish I have always loved to make. I inherited it from my mother and her mother. It was a regular feature at their dinner gatherings and became one at mine. My family and friends still regularly request it all these years later and I suppose it is one of my signature dishes.

I love seeing my children cook it. Nasreen says cooking it makes her feel close to her parents, and I am so happy to hear this. This food gives us both a great sense of continuity. I hope you will enjoy this little taste of my life and one of my favourite savoury dishes.

Wash the rice in water until all the starch has disappeared. Let it rest in water for two hours or more.

To prepare the orange topping, peel the oranges in triangular shapes and slice thinly.

Place the orange peels in a pot with water and simmer until the peel softens – around 30 minutes. Drain the water and return the orange peels to the pot. Add cardamom, orange food colouring and almonds. Bring to a low simmer then remove from the heat to rest.

To prepare the chicken, place oil in a large pot and add the minced onions. As they soften, add the garlic and salt and caramelise the onions until they turn dark brown.

Add the chicken and cook well on all sides. Add one or two cups of water and simmer the chicken at a low heat for about 30 minutes, or until the oil has come to the surface of the pot, or the water has reduced down.

Next, make the rice using a pasta boiling method. Fill a large pot with water almost all the way to the top and bring it to the boil. Drain the soaked rice, then add it to the water. Let it boil until soft, following packet instructions. Drain the rice and place it back in the same pot.

Next, separate the rice into two portions: a larger portion should remain in the pot to mix with the chicken, and a smaller portion will be removed and mixed with the orange peel on top.

Stir the chicken mix you made through the larger portion of rice, being sure to mix well. Wrap a towel or a cloth around the lid of the pot and place it over the pot to prevent steam escaping. Then let the rice and chicken mix simmer on low heat for 20 minutes, or until the rice makes a crackling sound.

Strain the orange mix, reserving the liquid, which you should mix through the smaller portion of rice, to give it colour.

Place the orange rice mix into a smaller pot. Then place the orange peels and almonds all on top with some cardamom. Wrap this pot up with a cloth and place on the stove to cook for about 20 minutes.

Once both lots of rice are done, place the brown chicken rice in a large dish, placing the chicken thighs between two layers of rice. Layer the orange-coloured rice over the top, and finish with the orange peels and almonds on top. Enjoy!

Sat Apr 23 , 2022
Books play a magical role in our childhoods. Those few minutes of bedtime reading at the end of the day are so precious and sweet for children that they ask for another story, and then another, and another. Though children’s books speak to society’s most innocent humans, from a vegan […] 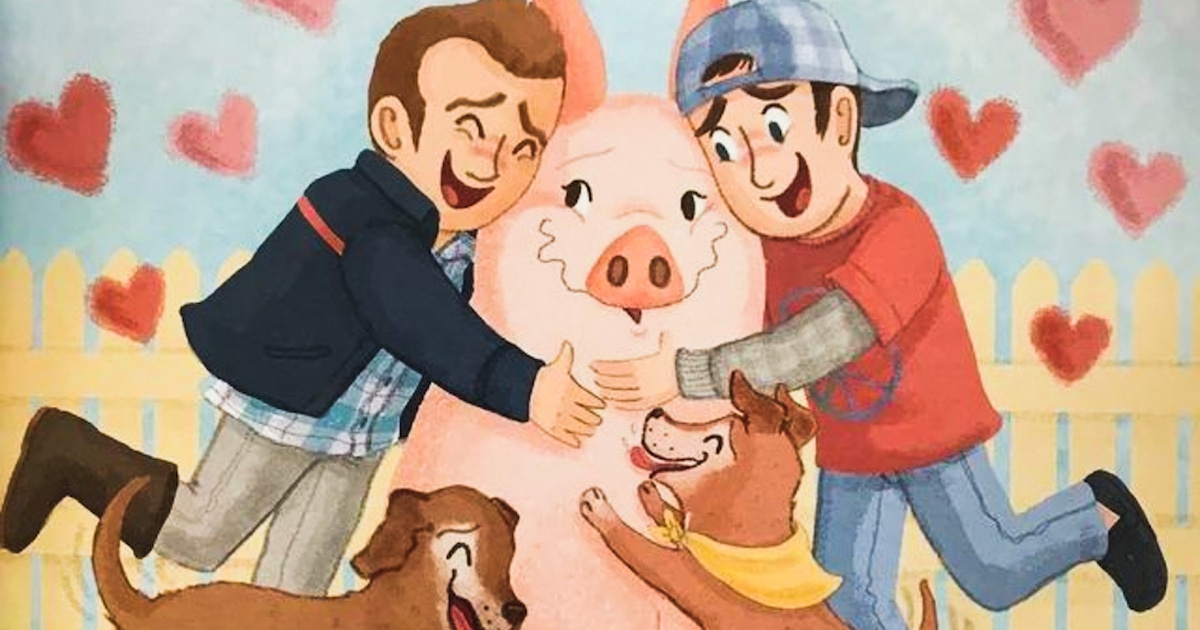