It’s not happening at restaurants, but in the homes and backyards of out-of-work cooks, high school coaches, mothers and fathers — people who have turned to selling food to make ends meet during the coronavirus shutdown. On any given day, if you’re clued into the right Instagram and Facebook pages, you can find homemade quesabirria tacos, fresh tamales, lumpia, pupusas, smoked brisket, smoothies, boba tea and otai (a Polynesian drink made from fresh fruit).

While these types of homemade food ventures have long existed in neighborhoods throughout the Bay Area, a new wave of businesses have taken hold during the shutdown. For most people, it’s a good enough side hustle to help them get by during a challenging time. For some, it’s generating enough income to help them cover rent while they wait for the next unemployment check or send money to family members in their home countries.

“That’s what a lot of people are doing right now,” said Tina, a Mountain View resident who sells desserts out of her home. “If they have a skill, they’re trying to figure out, how can I utilize it to best help me during this pandemic?”

In many ways, the boom in under-the-table home food businesses — concentrated in communities like East Palo Alto where residents are hardest hit by the economic impacts of the pandemic — reflects the inequities of the shutdown. The majority of people interviewed for this story are selling food without permits, using social media and word of mouth to boost their new ventures. For many of them, getting the necessary permits to legally sell homemade food is a less pressing concern than making rent.

In one East Palo Alto backyard on a recent afternoon, a makeshift kitchen, complete with two flat top grills, stacks of takeout containers and a steaming vat of consommé broth, was churning out orders of quesabirria, burritos, rice and beans. Pepe, an East Palo Alto native who was a cook at Facebook until the social media company’s Menlo Park campus shut down in mid-March, manned a sizzling flat top next to family members he’s recruited to help his homegrown business. (Because Pepe and other sources in this story are selling food without the required permits, they will only be identified by their first names.)

Pepe sells his food through Instagram every weekend, often selling out quickly. He built a covered wooden patio outside and added the second flat top to keep up with demand.

He’s long wanted to start his own business — a food truck is the goal — but didn’t have the time or impetus until the shutdown. He started cooking at Facebook eight years ago after attending the culinary arts training program at JobTrain in Menlo Park. He said working in the kitchen felt like a natural fit: “This was the first time in my life I was like, ‘I want to get up at 6 in the morning and go to work.'”

Pepe’s recipe for slow-braised birria takes inspiration from his father, who worked as a professional chef, and mother, who would make the dish with the traditional goat but also sometimes beef. Pepe prefers beef, which he marinates overnight with a special mix of spices and starts braising early in the morning so it’s fresh at noon when he starts selling.

He puts the rich, shredded birria into several kinds of tacos — quesabirria, multi and vampiro, all variations on crispy corn tortillas with meat and melted cheese— as well as ramen with fresh noodles.

“I’ve been wanting to start my own thing. As a chef, that’s the ultimate goal,” Pepe said. “You make good food, people are going to come and try it.”

Pepe is making money, though not much since he’s only selling food once a week. He hopes to purchase a food truck soon so he can serve food full time — and do it legally.

He’s one of many local residents pursuing this kind of under-the-table income.

Tina, who has a self-described sweet tooth, started selling chocolate-covered strawberries to friends and family for fun on Valentine’s Day. Then COVID-19 hit, and her husband lost his job. He received two weeks of unemployment and then the checks stopped coming, she said. In April, she was elated to get hired as a contractor at Stanford Hospital, making $25 an hour — and then got laid off because, she said she was told, the hospital wasn’t crowded enough.

She thought of the chocolate-covered strawberries, which had netted her a few thousand dollars. So she made a website and social media pages, expanded to making several flavors of jarred, no-bake cheesecakes and started offering delivery throughout the Bay Area three days a week. She now sells about 50 to 100 cheesecakes a week — enough to cover her family’s household bills.

“It’s given us a nice cushion during this pandemic where at first we were trying to figure out if we still had a house to live in,” Tina said.

For residents of Santa Clara and San Mateo counties, Cottage Food permits are the path toward legally selling food out of their homes. The California Homemade Food Act allows people to sell specific “low risk” foods made in home kitchens. These are largely largely non-perishable foods that don’t require refrigeration to keep them safe from bacterial growth that could make people sick, such as bread, dried pasta, coffee, tea and honey.

Permits can be costly. In Santa Clara County, there are two categories of Cottage Food permits, one costing $219 and the other $635, with additional fees for any complaint inspections or if additional time is needed to review paperwork or food labels. There are also annual revenue caps for cottage food operations.

In 2019, a new California law that allows people to sell more kinds of food from their homes, the Microenterprise Home Kitchen Operations (MEHKO) Act, took effect, but with a major catch — counties have to opt in for local implementation.

That same year, the San Mateo County Board of Supervisors approved a pilot program of the state law, but it was contingent on hiring more staff, according to Heather Forshey, director of San Mateo County Environmental Health Services.

With Environmental Health Services staff now consumed with responding to COVID-19, the pilot fell by the wayside, she said.

Forshey said the county plans to resume the pilot at a later date and is not considering easing regulations during the shutdown, which leaves the homegrown efforts of Pepe and others on the margins, even as the state has a program to accommodate them.

“Public health protection is the highest priority for County Environmental Health as it implements the state’s regulations, including regulations pertaining to sales under the Microenterprise Home Kitchen Operations Act,” Forshey said. “There is also no legal flexibility to ease permitting.”

Rochelle Gaddi, director of the Santa Clara County Consumer Protection Division, said the county hasn’t opted into the state law and that the Department of Environmental Health “continues to evaluate the options regarding the implementation of the MEHKOs program within Santa Clara County.”

The text of the state law, AB626, acknowledges that an “informal economy” of illegal homemade food exists in communities across the state.

“However, due to a lack of appropriate regulations, many experienced cooks in California are unable to legally participate in the locally prepared food economy and to earn an income legally therein,” the bill reads. “As a result, and because they feel they have no other option, thousands of private chefs, home caterers, and many other food microentrepreneurs cook out of private homes or unlicensed food facilities, with little access to education for best practices or safety guidelines.”

The bill notes the benefits of legalizing that world, from increasing food access (particularly in food deserts), increasing public health safeguards and providing economic opportunities to people who “are unable to enter the traditional food economy based on disability, family responsibilities, or lack of opportunity.”

“Small-scale, home-cooking operations can create significant economic opportunities for Californians that need them most — often women, immigrants, and people of color,” the law reads.

‘We need the money now’

Monday through Friday, Teresita posts to Instagram the homemade dishes she’s selling that day — from lumpia, bihon pancit and chicken adobo to spaghetti and meatballs and cupcakes. She offers pickup at her home in Mountain View or her son will deliver for an extra $5.

Teresita loves to cook — she’s Filipino, so food is a fundamental part of any of her family gatherings or celebrations. But it wasn’t until she lost her job at a local electronics store in April that her home kitchen became her main source of income. In this regard, Teresita, much like Pepe and Tina, is one of many locals who have turned to home cooking to navigate the COVID-19 economic downturn.

“It’s really a big help for us,” Teresita said in a recent phone interview after she finished making that day’s dish, pork sisig. “It gives me (money) to pay my rent, to pay my insurance, to buy some food. I still send money to my family in the Philippines.”

Eddy and Alice, a couple who live in Daly City, had always joked about a parallel fantasy life in which they quit their tech jobs, move to Hawaii and start a barbecue pop-up.

In early April, part of that unexpectedly became their reality. Eddy was furloughed and Alice was laid off. They decided to turn what was a weekend passion — barbecuing and cooking for friends — into their main gig. They were inspired in part by other local food businesses that they watched rise from obscure homegrown operations into fully fledged businesses with loyal followings.

Eddy, who is Burmese and Chinese, is the self-declared pit master. He spends hours making pork ribs, brisket, pulled pork and hot links in two smokers in their backyard. Alice is the chief operating officer, organizing orders and managing their social media presence. She also jumps in to season the meats and make some of the side dishes, including mac salad and collard greens.

The extra income is “tiding (us) over,” Eddy said. “If it blew up so big that I didn’t have to go back to tech I don’t think I would feel bad but at the same time, I paid attention to the margins — it’d be awhile before we could match the income we were making in tech.”

Tina, for her part, said trying to get the permits to make her business legal was the first thing she looked into. But finding the right information was challenging and it was hard to tell whether the offices in charge of home food operations were even open at the start of the shutdown, she said. She takes food and health safety seriously, sanitizing her house twice a day, wiping down anything she touches, always wearing a mask for pickups or deliveries and putting her desserts into a basket for contactless pickup.

Tina encouraged anyone else who’s thinking about selling food out of their homes to do the same, although she understands why some people haven’t gotten permits.

“I know right now people are just doing what they need to do to make ends meet. I wouldn’t tell somebody, ‘Wait until you can do everything right,” she said. “We need the money now. If no one else is going to help us, we’re going to have to help ourselves.”

Sat Aug 8 , 2020
5 Anti-Inflammatory Ingredients to Add to Your Smoothie for a Healthy Boost Anti-inflammatory smoothies do exist! Instead of blending in boatloads of sugar and artificial ingredients, try these smoothies for inflammation that are stoked with ingredients that may help lower your risk for chronic diseases including cancer, hea True, inflammation […] 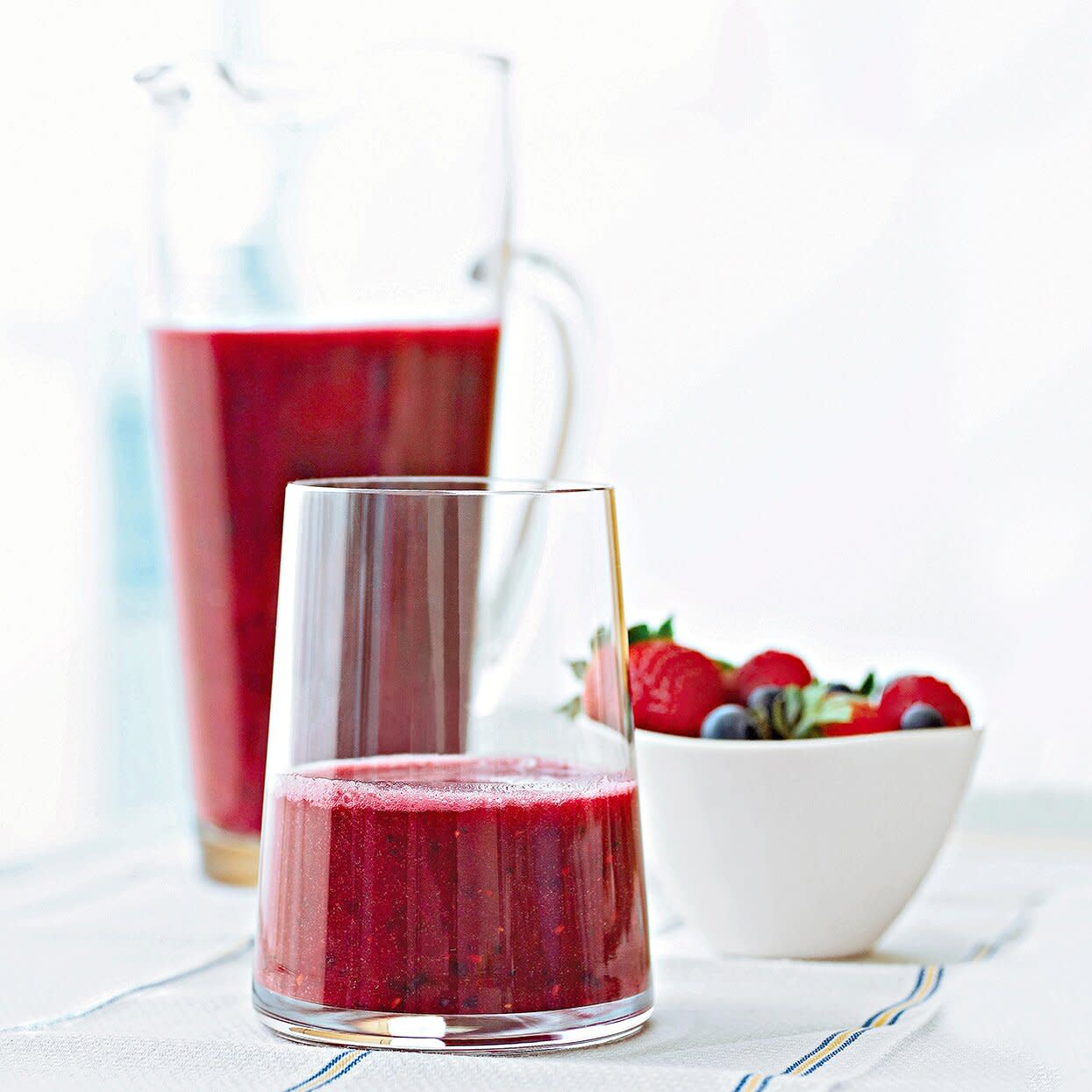