The Guardia Civil ran two operations in Madrid and Salamanca, Spain. In the first action, named Operation SLICE, more than 63,000 containers of products were seized because some had labels that looked to have been modified.

Authorities arrested six people and investigated another two from seven food companies in the provinces of Madrid, Córdoba, Toledo and Badajoz. They are suspected of changing labeling and using false traceability of meat products to pretend they were Iberian.

Seized items were worth up to €967,000 ($1.19 million) and posed a risk to public health, because they were considered unfit for consumption, according to the Guardia Civil.

Labeling and documentation issues
The investigation began this past year when suspicious documentation was identified on products prepared for sale as Iberian in a warehouse in Córdoba. They were sent to a supermarket chain for sale nationwide, which was unaware of the product fraud.

In one of the supermarket chain’s logistics centers in Getafe, the sale of 5,768 packages of supposedly Iberian products was stopped. Officials discovered that in other storage facilities in Córdoba, Toledo, Barcelona, Seville, Málaga, Alicante, Almería, Cádiz, Zaragoza and Valladolid, containers also showed the same irregularities.

In the other action, a company selling cured pork products, which had two physical stores in Jaén and a website for direct sale to the public was thought to be fraudulently selling products, especially hams.

Those responsible for the company, a man and a woman living in La Carolina in Jaén have been investigated for being behind the fraud.

The firm sold hams as 100 percent Bellota with the Guijuelo Protected Designation of Origin sign at a lower price than those legally marketed under that name and didn’t comply with the Iberian quality standard.

Labels with falsified logos of the Guijuelo Protected Designation of Origin and hams already labeled and ready for shipment were seized as traceability could not be proven.

Shady shellfish
The Guardia Civil was also involved in uncovering an international network that traded shellfish unfit for human consumption.

The bivalve-Tagus Clam operation, coordinated by Europol and Eurojust, led to eight people being arrested and seven companies being investigated.

Shellfish were said to have come from the Sado River but actually came from Tagus Estuary which is generally more contaminated. Clams were bought by Spanish treatment plants and then sold and exported to other countries of the European Union without having gone through the mandatory decontamination treatment.

Investigated companies operated in Spain, Portugal and Italy and all the clams came from poaching shellfish off the coast of Portugal.

At a Food Fraud Network meeting in May 2020, the European Commission said it was aware of irregularities in the movement of bivalve mollusks and called on countries to investigate.

An investigation into the trafficking of clams in December 2019 linked it to the food poisoning of at least 27 people in Spain. The clams were suspected of having been collected in non-authorized harvest areas in Portugal. Washing helped get rid of bacteria such as E. coli but did not eliminate viruses like norovirus and hepatitis A.

Love Bacon? Heres An Easy Hack To Make It Vegan-Friendly

Mon May 31 , 2021
The vegan diet is one of the most popular diets across the world. The plant-based diet cuts out all kinds of animal products such as meat, fish, chicken, eggs and dairy products. Given that animal products are known to be high in saturated fat and cholesterol, it is no surprise […] 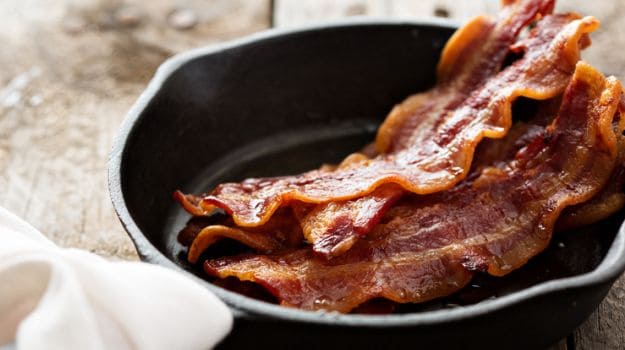