That is one of the conclusions of a study conducted by an agricultural economist at Penn State who examined the food environment for residents in the Mississippi Delta, a region that has one of the highest obesity rates in the U.S.

The findings have important implications not only in the Mississippi Delta, but for other regions of the country where convenience stores and dollar stores generally comprise the highest proportion of stores available, noted Linlin Fan, assistant professor of agricultural economics in the College of Agricultural Sciences.

This food environment is associated with household food choices and the ability of consumers to access and afford healthy diets, said Fan, who collaborated on the study with Elizabeth Canales, assistant professor in the Department of Agricultural Economics, Mississippi State University.

Mississippi has a large rural population and is among the states with the highest obesity rates in the country, the scientists noted. The Delta region of Mississippi has some of the greatest income inequality, highest rates of poverty and highest prevalence of preventable, nutrition-related chronic diseases in the country.

In 2019, the researchers used the Market Basket Assessment Tool — a retail environment audit instrument — to evaluate differences in prices and availability of healthy foods in the eight counties with the highest obesity rates in the Delta region.

These counties were Holmes, Humphreys, Issaquena, Leflore, Quitman, Sharkey, Sunflower and Washington. Of the counties evaluated, three had a supermarket, one had only a convenience store, and the remainder had a small number of grocery stores. “The predominant food retail format in all counties was convenience stores,” Fan said.

She added that 24% of the population in those counties are low income and around 10% receive SNAP benefits, which limits the stores where they can purchase food. Additionally, approximately 36% live 1-10 miles away from a supermarket or a grocery store and often do not have access to transportation.

To determine a healthy food availability and quality score across food outlets, the scientists documented the number of items available in six food groups — grains; fruit; vegetables; meat; dairy and eggs; and dried beans, seeds and nuts. They also evaluated food prices across store formats based on dollars per ounce.

Their findings, recently published in Preventing Chronic Disease, showed that supermarkets provided the healthiest assortment of foods, followed by grocery stores. The healthy foods availability and quality score for convenience stores, which comprise the highest proportion of store formats in the region, was 70% lower than for supermarkets.

For all food groups, the scientists found a significant gap between scores for convenience stores and scores for supermarkets and grocery stores, and the difference was most striking for fruits and vegetables. This gap is explained by the lack of fruit and vegetable options, Canales said.

For example, she explained that none of the convenience stores carried frozen fruit, and only a few carried fresh fruits and vegetables. Convenience stores and dollar stores generally sold eggs and milk — albeit in smaller packages than at supermarkets or grocery stores — but low-fat cheese and yogurt were rarely available.

Fan and Canales said their results have important implications because they affect a considerable segment of the population, specifically those who acquire foods at retail outlets other than supermarkets and grocery stores. These residents must resort to convenience or dollar stores to meet their food needs because of the limited access to supermarkets or full-service grocery stores.

“We suggest ways to promote healthy food environments including marketing and educational efforts about the importance of healthy food choices, and SNAP subsidies to purchase fruits and vegetables,” Fan said. “Initiatives such as these could go a long way in making a difference in health outcomes for those who need it most.”

The project received funding from the Centers for Disease Control and Prevention and the U.S. Department of Agriculture’s National Institute of Food and Agriculture.

Wed Feb 16 , 2022
Great news for beverage lovers, HY BTS Coffee Brand, is giving an opportunity to their consumers to visit Korea and watch the LIVE concert of the world-famous K POP BTS Group. The consumers have to just take part in the contest by buying the BTS Coffee Bottle, and you can […] 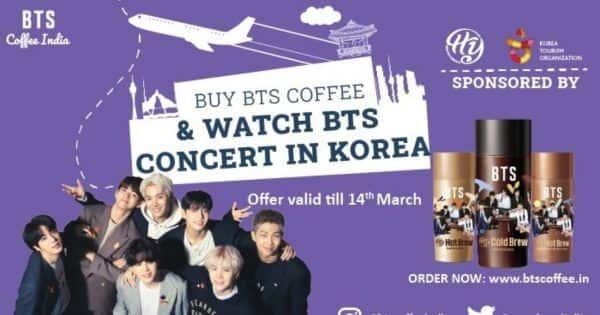