All over the world, vegetarianism and veganism are increasingly popular. According to Google trends, interest in “veganism” increased sevenfold between 2014 and 2019; now, it gets almost four times more interest than “vegetarian” and “gluten-free” searches.

According to the statistical research of Wikipedia and The Vegan Society, the total number of vegans and vegetarians is close to 8{c33c21346ff5e26ab8e0ae3d29ae4367143f0d27c235e34c392ea37decdb8bed} of the world population. Although there are various reasons for these lifestyle choices, including increasing interest in protecting animal rights, the environment, and personal health, these types of diets are causing changes and driving trends across the globe. Today, TAIPEI has a talk with Mai Bach, a prominent and passionate vegan advocate in Taipei, to explore the vegetarian and vegan culture in this trendy metropolis.

Mai Bach, a Vietnamese-American from Southern California, never imagined she would lead the vegan culture in Taipei when she and her husband moved to Taipei 12 years ago to teach English. In fact, like other global nomads, she was ready to move on to the next country after her English-teaching stint in Taipei was finished. Just before leaving for her six-month backpacking trip through China and Southeast Asia, she picked up the book Eating Animals by Jonathan Safran Foer. After learning about the adverse effects on the environment caused by eating meat, as well as the severe lack of regulations in the meat and poultry industries, she decided to become a vegetarian.

Her trip around Asia turned out to be very difficult because of her new lifestyle choice. Not only were there few food options available for her, but the countries they traveled to were also unfamiliar with the needs of a vegetarian eater.

With a newfound appreciation for Taipei, Mai and her husband returned to the vegetarian-friendly capital. Although they resumed teaching English, they came back with a dream to one day start their own business — the type yet to be determined.

For her own personal well-being, Mai began educating herself and adopting a raw food diet, which consists of raw and unprocessed foods that have never been heated over 42 degrees Celsius. Since most vegetarian restaurants in Taipei still used oil, deep-fryers, and braising in their cooking methods, she resorted to cooking at home. When Mai noticed that the green smoothies she made were gaining increasing attention and popularity among her co-workers, the idea for Ooh Cha Cha was born.

Opened in 2013, the sustainable, healthy, cruelty-free, fair and community-oriented business Ooh Cha Cha has garnered attention throughout Taipei for its novelty and best practices. The couples’ efforts have afforded them a B Corporation Certification, the only certification that measures a company’s entire social and environmental impact. It proves that a business is meeting the highest standards in terms of how it treats its workers, community, environment, and customers. Ooh Cha Cha is the first — and currently only — restaurant to meet these standards in Taiwan.

Mai understands that not everyone can go vegan, but instead encourages customers and the city of Taipei to eat meat less often. It is Mai’s hope that the Taipei community will not only learn about the health benefits of eating a raw food diet, but become more aware of how eating vegan can reduce the impact of climate change on the planet.

“Taipei is actually pretty amazing,” Mai says of the city’s vegetarian and vegan scene. In fact, with a large Buddhist population (35{c33c21346ff5e26ab8e0ae3d29ae4367143f0d27c235e34c392ea37decdb8bed} of the island’s total population), Taiwan has long accommodated vegetarian diets. Guided by religious reasons and spiritual beliefs, many Buddhists in Taiwan avoid eating meat. As a result, vegetarian buffets and restaurants are easily found throughout the foodie capital of Taipei. And employers, businesses and even individuals respectfully accommodate the request for a vegetarian meal due to the wide exposure of this diet and its religious origins.

Non-vegetarian Taiwanese are also accustomed to giving up meat intermittently. Based on folk religion or observance of other cultural rituals, Taiwanese may go on a diet on certain days of the month. Similarly, a common Chinese folk religious custom known as huan yuan (還願, redeem a vow) is similar to the Christian practice of Lent, whereby individuals will ask the Gods for a favor in exchange for abstaining from eating meat for a certain length of time.

There are currently more than 6,000 vegetarian eating establishments in Taiwan. Because around two million Taiwanese people eat vegetarian food, Taiwan has some of the world’s strictest labeling laws for vegetarian products. The “Meatless Monday” concept is also practiced by many citizens in Taipei, and restaurants often join in by offering discounts for vegetarian options on this day of the week.

Meanwhile, the high quality and popularity of imitation meats in Taiwan contribute to Taipei’s vegetarian-friendly environment. Imitation meats are usually made from vegetarian ingredients such as soy, mimicking the texture, flavor and appearance of a real meat to some extent.

“Even in the States, my vegetarian mother would look for the Taiwanese imitation meat in the grocery stores,” Mai adds. “It was the best quality.” Thus, with the growing popularity of acclaimed imitation meats, easy access to vegetarian meals, and a respect for vegetarianism, it is quite easy for both locals and foreigners to eat a vegetarian diet in Taipei.

While vegetarianism has been a common practice throughout Taipei for centuries, veganism has been slower to enter the bustling metropolis known worldwide for its food traditions. Unlike the vegetarian culture predominantly led by spiritual and religious beliefs, veganism, a stricter form of vegetarianism emphasizing the avoidance of consuming or using animal products or byproducts, in Taipei is guided by environmental awareness and a respect for animal rights.

Taipei’s vegan movement, arguably, has been led by an environmentally-conscious younger generation who view veganism as an important way to protect and improve the planet. Two Taiwanese YouTubers who impressed Mai the most are “Go Vegan” and “Traveggo.” “They have made waves — both domestically and abroad — with their advocacy for a vegan lifestyle,” Mai adds. And youth organizations throughout Taiwan, such as the Taiwan Youth Climate Council (台灣青年氣候聯盟), actively lobby the government for more sustainable and conservation practices throughout the island.

According to Mai’s observations, this awareness and increasing popularity of veganism has also increased the number of vegan options available on the island. For example, Starbucks and other coffee shops now offer oat and nut milk as an alternative beverage option. OmniPork, the world-renowned plant-based pork substitute from Hong Kong, is offered in chain restaurants throughout Taipei. It can be directly purchased from convenience stores and is now an option offered by Taiwan’s famous dumpling chain 8 Ways (八方雲集). Convenience stores like Family Mart now have a vegan-designated section, and vegan grocery stores like iVegan Supermarket (愛維根蔬食超市) as well as organic supermarkets like Santa Cruz (聖德科斯) and Leezen (里仁) also offer fresh and imported vegan products.

Taiwan also currently features large vegan festivals such as the No Meat Festival (無肉市集) and the Taiwan Vegan Frenzy Festival (草獸派對). In addition to food, all vegan-related businesses, such as clothing, accessories, and even skincare brands, can be found at these gatherings.

Furthermore, restaurant styles vary from vegan Japanese street eats to vegan Western comfort food. The udon shop Hoshina (穗科手打烏龍麵) and Baganhood (蔬食餐酒館) are two of Mai’s recommendations. Even Taipei’s top Michelin-starred restaurants have been known to offer vegan versions of their food upon request, and most of Taipei’s luxury hotels offer a vegan fine dining experience. Vegan bakeries like Vegan Heaven (純素天堂) and vegan ice cream shops like Nice Cream are a big hit throughout Taipei, and often feature a Taiwanese staple that also serves as a substitute for Taiwan’s lactose-intolerant: soy milk.

Although most vegan restaurants feature Western-style food, the locals have also adopted this trend, converting traditional Taiwanese dishes, such as three-cup chicken (三杯雞) and mapo tofu (麻婆豆腐), into vegan-friendly meals. Vegan food bloggers have identified over 40 different vegan options at Taipei’s night markets, a phenomenon where street food vendors set up shop as soon as the sun goes down.

With a vegan culture growing strong and steady in Taipei, it is no surprise that the city has been designated as “Asia’s top destination for vegans” by international travel experts from all over of the world.

Vegan restaurants continue to pop up in this modern city, while environmental concerns are being heard loud and clear by a transparent and democratic government. With a longstanding vegetarian culture as a backdrop, Taipei has evolved into Asia’s new vegan mecca where vegans and non-vegans alike can enjoy Taipei’s vibrant plant-based food. “My goal is not to make everyone go 100{c33c21346ff5e26ab8e0ae3d29ae4367143f0d27c235e34c392ea37decdb8bed} vegan.” says Mai. “If everyone can start from simply enjoying plant-based food once a week or once a day, that would be a start to helping the planet!”

A simple vegan recipe for all: Tofu scramble

In line with Mai’s mission of teaching people how to reduce their carbon footprint through food, she provides a simple, vegan breakfast recipe for people of all culinary abilities.

INSTRUCTIONS
1. Break up the tofu with your hands. (tip: Press the block of tofu to release the water. Remove as much water as possible)

2. Add the thyme, paprika, mirin, turmeric, black salt, and nutritional yeast to the crumbled tofu and mix with your hands.

4. Add diced tomatoes to the pan to stir-fry with mushrooms.

5. Add the spiced, crumbled tofu to the pan. Cook water out of the tofu until the yellow hue turns a richer orange. Stir using a folding motion.

This article is reproduced under the permission of TAIPEI. Original content can be found at the website of Taipei Travel Net.

If you enjoyed this article and want to receive more story updates in your news feed, please be sure to follow our Facebook.

Skip the fad diets and find a better way to talk about food with your kids, get healthy in 2021 :: WRAL.com

Mon Dec 28 , 2020
By Sarah Lindenfeld Hall, Go Ask Mom editor For many of us, a new year turns to thoughts of losing weight and getting fit. But when we have kids, we also need to be mindful about how we talk about our bodies and the food we eat. Before you resolve […] 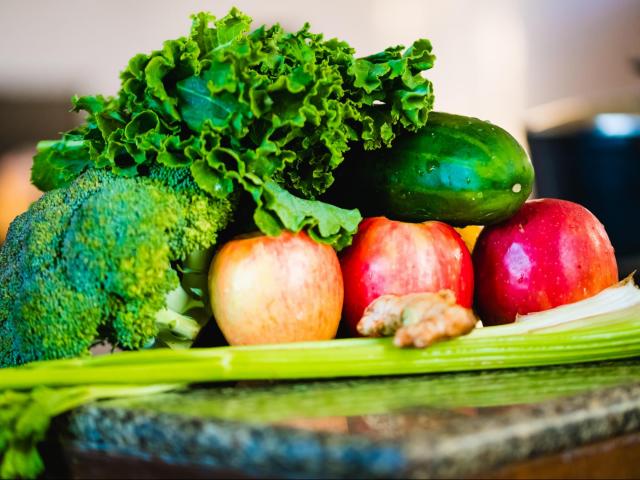