When my husband left his home in Mississippi as a young man, his grandmother gave him two heirloom cast iron pans that she had received from her grandparents. They’re still among his most treasured possessions — and he knows how to use them, especially for dishes like savory cornbread and oven-fried chicken. When our kids moved out, we continued the tradition by giving them each a cast iron skillet.

It’s that kind of family legacy that helped inspire Tallahassee’s Ashley L. Jones to write the cookbook, “Modern Cast Iron,” a “complete guide to selecting, seasoning, cooking and more,” available from Red Lightning Books. Jones will launch the book from 1-3 p.m. Aug. 18 at Hearth and Soul on Market Street.

“It’s written for home cooks,” said Jones, who offers 50 recipes in “Modern Cast Iron.” “It’s everything I’ve been able to pull together through years of research online. I took what seemed to be the most pertinent stuff that the home cook needs to know. A hobbyist, a collector or a chef might do something different, but it’s geared to those trying to cook at home and get food on the table, keep a pan in working order and keep it in the family for many years.”

On the book lovers’ site, Goodreads, the cookbook has already garnered a 4.38 rating with raves like this one from Kristen Parnell: “Modern Cast Iron is a guidebook that’s accessible to the seasoned chef as well as cast-iron newbies like me. If you feel intimidated by cast iron but want to learn how to cook the way your grandma did, this book is for you.”

Jones’ message of food and family resonates even more at a time when so many of us are staying home and sharing more meals as a family.

“I think we’re seeing, as a nation, that this is more important than we ever realized,” said Jones, who has a 19-month-old son named Gordon. “The whole nation is going through this together  one way or another. What we’re all learning is that you can’t overestimate the importance of sitting down at the table with your family, the family culture you establish, the memories you’re making with your kids.”

More:Southern squash casserole is a smash for any occasion

Jones has fond memories of her own grandmother cooking on a cast iron pan but she really became hooked when she went with her future husband Robby to meet his parents. In her book, Jones writes that they told her about a proud past —  “cooking hoe cakes on a cast-iron stove and baking biscuits in Dutch ovens over hot coals.”

She was impressed by her mother-in-law’s Southern down home cooking, using simple ingredients like fresh corn, beans and peas from local farmers in Crestview.

When her mother-in-law gave Jones a two-quart Dutch oven, she said she felt like part of the family.

Now, 11 years later, this Tallahassee mom, blogger, teacher, consultant and author has developed cast iron chops, sharing what she’s learned about the cookware and her love for home-cooked food.

Jones notes that she’s a home cook, not a chef — and a cast iron pot is “definitely for the home cook and it has been for hundreds of years. Remember America was settled on cast iron cookware.”

At the same time, cast iron has again experienced a resurgence, and there’s a “huge cast iron community,” she said.

It’s easy to understand why. Aside from the nostalgic factor, cast iron is affordable, easily restored, versatile, has “superior heat retention” and is “so forgiving,” said Jones.

“It’s a lot harder to burn something in a cast iron pan. Things just tend to come out easier rather than stainless steel, which tends to be trickier. It may not be grandma’s pan but this is what grandmas used. This is what they had and they made it work.

“I started to get the hang of cooking when I started using cast iron and that’s powerful,” said Jones. ”It builds your confidence in the kitchen.”

When she started using her first cast iron pan, she encountered a common challenge — how to clean and care for the cookware.

“It took me awhile to wade through everything online,” said Jones.

One thing she discovered is that cast iron cooking has health benefits. In her book, she notes that “it’s estimated that three to four milligrams of iron are leached into eggs, while as much as seven milligrams are leached into acidic foods during the cooking process” — which is helpful when you consider that the recommended daily intake for iron is 10 to 15 milligrams per day.

The book delves into nitty-gritty topics like how to clean and season cast iron, how to deal with issues like rust and food sticking during cooking, choosing your oil (look for oils with lower smoke points like extra light olive oil, avocado oil, refined safflower oil), and picking out the right type of cookware. She also discusses enameled cast iron, which she likes for a Dutch pot for dishes that will be cooked for hours.

Jones didn’t just depend on internet research or even her own experience. She visited Lodge Cast Iron, located in South Pittsburg, Tennessee. The firm, founded in 1896, is the oldest and largest cookware manufacturer in the U.S.

“Ashley’s is a much-needed work for beginners and experienced cast-iron cooks …” Mark H. Kelly, former PR and advertising manager at Lodge Manufacturing Company, wrote in a blurb about the book.

Along with “Modern Cast Iron,” Jones has written a series of faith-based children’s books called “Big Answers.” The first entry in the series is titled “Who is God?” and is due out in 2021 from the publisher Little Lamb Books.

Jones, originally from Lake City, said she “always wanted to be a writer,” but she studied risk management and insurance at Florida State University. A 2003 graduate, she “was in the insurance world a long time.”

Jones eventually attended the Tallahassee Christian College & Training Center, where she taught a few classes before her son was born. She still writes a blog called Big Sister Knows — she is a big sister to three siblings —and works from home as a consultant on enterprise risk management.

Through all her endeavors, Jones said spending time with her family, sharing food and memories has been paramount.

“When you talk about food and family time it connects with you,” said Jones. “We don’t have bad memories associated with food. I’ve come to this belief. We always remember the good stuff.”

Never miss a story: Subscribe to the Tallahassee Democrat.

Ashley L. Jones will be launching “Modern Cast Iron” at Hearth and Soul, 1410 Market St., from 1 to 3 p.m on Aug. 18. You can preorder (or, after August 18, order) by clicking here: https://redlightningbooks.com/modern-cast-iron. The hardcover book is $22.

½ Tbsp olive oil (for the pan)

Hand-mix eggs, milk and vanilla until smooth. Stir in flour, salt, cinnamon and butter until blended. Pour batter into the pan. Arrange the peach slices on top (if the pieces are large you may want to cut them in half first).

Bake for 15 minutes. Then lower the temperature to 325 degrees F and cook for an additional 5 to 10 minutes. Do not open the oven door while cooking, as this can cause the Dutch baby to deflate.

Remove from the oven and sprinkle with powdered sugar, Serve immediately with butter and a dollop of Cool Whip. Leftovers (if there are any) are great the next day.

Thu Jul 30 , 2020
Crispy fried foods are delicious, but cooking them usually involves copious amounts of oil, which isn’t exactly great for your health. Air fryers — which cook foods by circulating hot air around an inner chamber, yielding a crunchy texture much like you would get with frying — can solve that […] 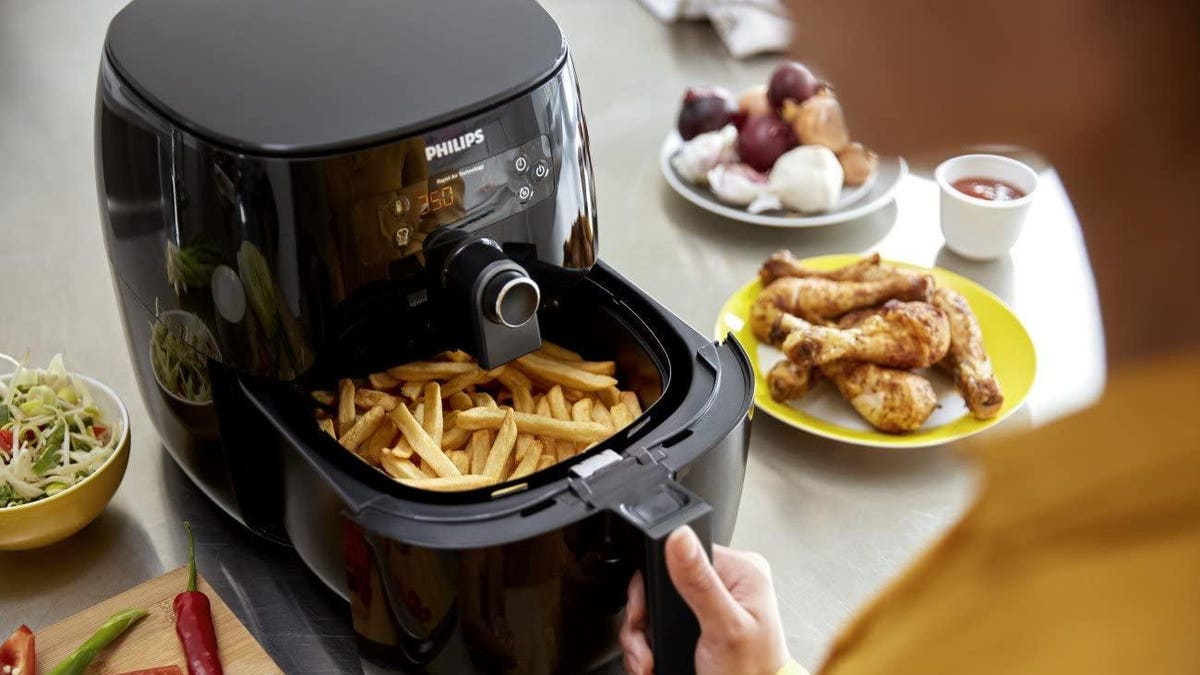