Frankly, anything in this year that takes some of the burden off the daily grind feels like a blessing, leftovers included. But I know they’re not the problem everyone likes to have, if you get tired of eating the same things or are not motivated to reinvent them.

To help you find that silver lining, I’ve collected a host of ideas to use some of the more common parts of the holiday meal. They cover a wide spectrum in terms of how much work you have to put into using them, so you can find the right fit for your favorite leftovers.

Have a favorite use of leftovers? Share in the comments below.

Turkey. I know, this is the leftover content you’re really here for. Of all the also-rans, the turkey is probably the most maligned, neglected and yet versatile. If your biggest concern is dry meat and how you can reuse it with the least amount of trouble, here’s a tip I uncovered in our archives from former Washington Post staffer Renee Schettler: “Simply fry it in copious amounts of butter.” [Insert mind-blown emoji.]

Schettler’s package from 2002 also included a mash-up of a Cobb salad and club sandwich that featured bacon, avocado, mayo and red onion piled onto dense, crusty white bread with sliced turkey. Another option: a grilled sandwich with avocado and mozzarella. Or how about a Hot Brown (open-faced) sandwich, that Kentucky staple? If you have leftover gravy, you could swap it in for the traditional cheese sauce for a hybrid experience. To be extra, you could turn the turkey into a falafel-esque meal.

If you’re feeling extremely motivated Thursday evening, go ahead and assemble a strata to have Friday morning. That’s a pretty easy dish to improvise, with eggs, milk, bread, cheese and whatever else you want to toss in. For a more specific game plan, check out Dorie Greenspan’s Next Day Turkey-and-Cranberry Sriracha Strata, above, which uses leftover turkey and cranberry sauce, plus greens, cheddar and an unexpected cinnamon raisin bread.

Anything that requires a filling will take nicely to turkey, whether that’s tacos, quesadillas, enchiladas, ravioli or pot pies (bonus points if you have extra pie crust). Turkey is an ideal topper, too, on pizza, salads and pasta, perhaps with a creamy Parmesan sauce.

And who could turn down a one-skillet meal, especially after all the cooking and cleaning for the holiday? Enter hash, stir-fries and shredded turkey warmed and tossed with barbecue sauce for a more seasonal spin on pulled chicken.

A long time back in our archives, Elizabeth Post Mirel suggested adding some to beef stew or pot roast for a hit of bright flavor, much as you might accomplish with lemon juice. Have you tried it in fruit salad, too? She also said cranberry sauce can serve as the base for a barbecue sauce. Ditto vinaigrette.

Stuffing. In name alone, “stuffing waffles” sound like something dreamed up for social media. But they’re trendy for good reason: They’re eye-catching and fun to eat. If your stuffing is already pretty moist, go ahead and pack it into your iron. If it’s on the dry side, you can add eggs, or even broth, to serve as a binder. Top with leftover turkey, cranberry sauce and/or gravy. Maple syrup is fair game as well, even more so if there’s sausage in the stuffing. (If not, now would be the time to consider adding some to the mix!) No waffle iron? Simply mix the stuffing with eggs and fry up individual fritters in the skillet with butter or oil.

Even if you didn’t stuff your turkey with it, stuffing can fill plenty of other foods. In another story from our deep archives, Jane Adams Finn suggested using stuffing to fill large mushroom caps: “Moisten the stuffing with a little broth, if necessary, and brush the stuffed mushroom caps with melted butter and bake until the mushroom is cooked through.” Or, as Post Mirel shared, tuck celery and apple stuffing into pork chops: “Into the slit of a thick chop insert about 2 tablespoons stuffing, close with a tooth pick and bake, covered, in a 325-degree oven for about 1 1/4 hours, uncovering for the last 20 minutes to brown.” I also like her idea to use sausage stuffing inside baked eggplant, peppers or tomatoes.

Potatoes or other vegetables. One of the least fussy strategies is to puree any of these to incorporate into soup. Mashed potatoes (white or sweet) will get you halfway to a shepherd’s pie, or closer if you decide to use leftover turkey and vegetables as the filling. Roasted vegetables can co-star with turkey in the aforementioned hash.

Here’s another clever take from Post Mirel: “In an ovenproof glass bowl place a layer of sweet potatoes, a layer of diced fresh pineapple (or drained, unsweetened crushed pineapple) seasoned with a bit of mace, and a layer of damson plum preserves. Bake at 350 degrees until the sweet potatoes and pineapple are hot and the preserves are syrupy, about 3/4 hour.”

Pie. I can guess the comments now! “Leftover pie?? What is leftover pie???” Look, guys, it happens. Sometimes. Anyway, of course “extra” pie is just fine served in its original form. If you’re feeling particularly fiendish (and maybe you didn’t overindulge on the holiday), you can incorporate it into a milkshake. I think bite-size pieces of pie would make another great mix-in for homemade ice cream. And this is a fun idea for a “pie parfait,” from Serious Eats.

At Thanksgiving, an America of obscene contrasts (opinion)

Thu Nov 26 , 2020
This year, many American families will find gratitude harder to summon heading into the holidays. Unemployment, widespread hunger and unchecked sickness and death are weighing heavily. The President doesn’t seem too worried — and neither does Wall Street. The Dow went above 30,000 on Tuesday, and then Trump popped out […] 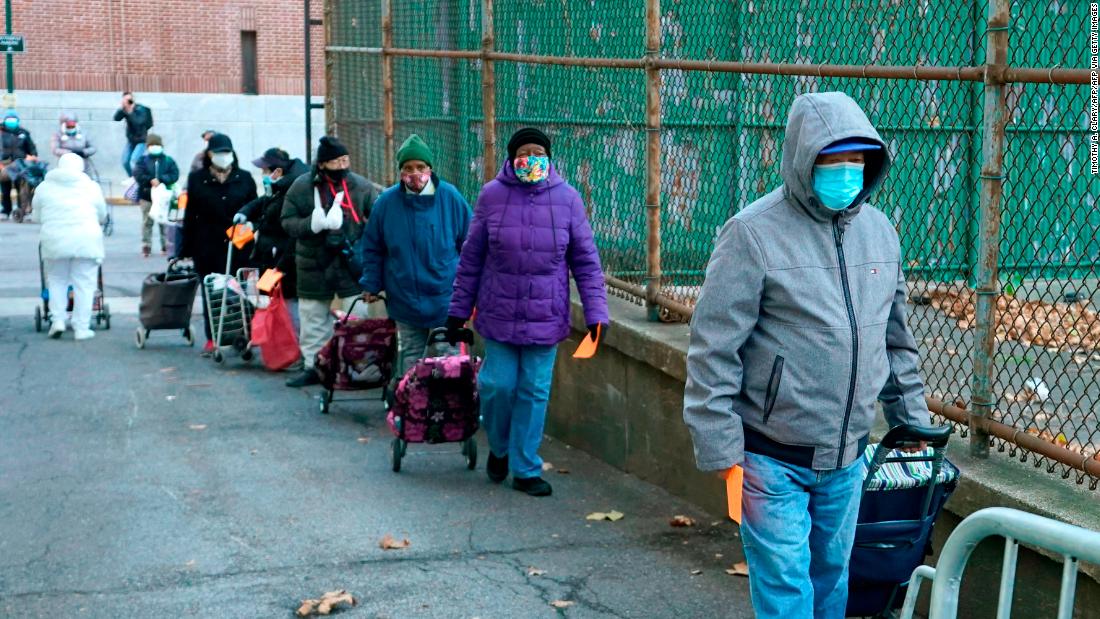