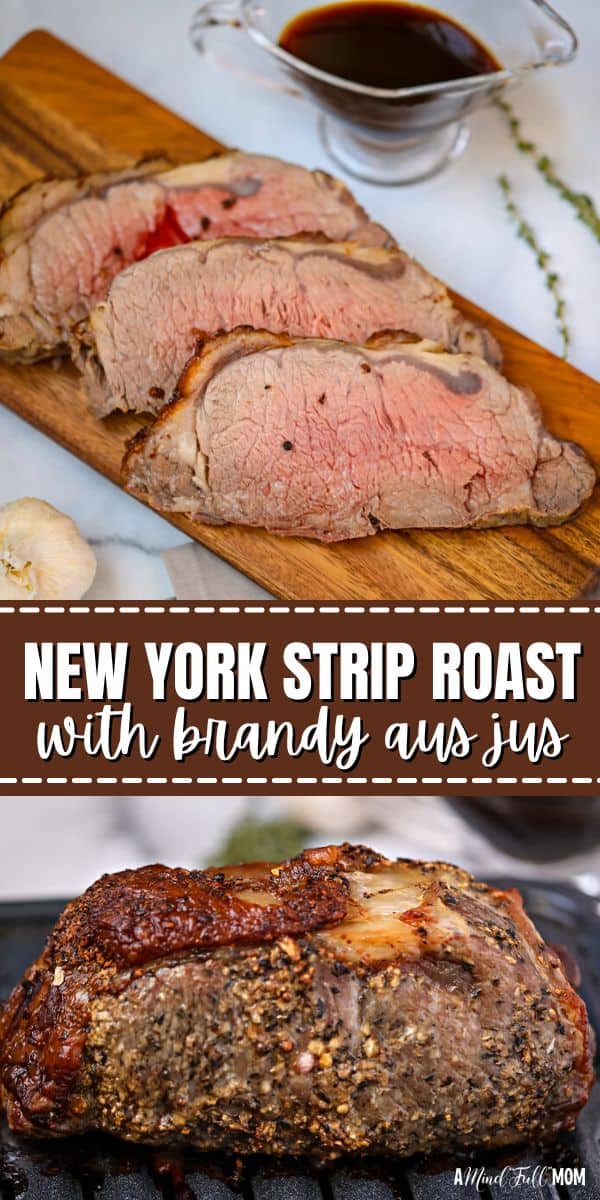 New York Strip Roast makes an impressive, decadent, main course that is perfect for a special meal. This New York Roast is seasoned and roasted to tender, juicy perfection. The flavors of the steak roast are delicious on their own, but when paired with an au jus that has been spiked with brandy, it creates one show-stopping entree!

Move aside prime rib, this is a lighter take on a steakhouse favorite that is more delicious than the original!

This recipe for New York Strip Roast alongside Twice Baked Potatoes and Roasted Brussels Sprouts has become my family’s tradition for Christmas Dinner.

And it is a meal my family looks forward to year-round with good reason! Rubbed with garlic and herbs and roasted to just the temperature you like, this recipe for New York Strip Roast produces mouth-watering results!

A New York Strip Roast is a leaner, less expensive take on a standing prime rib roast, and the results are spectacular.

So while Baked Ham and Prime Rib are delicious, I think after one bite of this luscious steak roast, you will start a new holiday tradition yourself.

How to Make a Perfect New York Strip Roast

The first step is to make a spice rub to season the New York Strip Roast. You will want to prepare this at least 12 hours in advance, to allow time for the NY Roast to absorb the seasoning.

Plan to remove your seasoned New York Strip Roast from the refrigerator and the meat sit on the counter for at least 1 hour. This will help the roast to cook evenly.

This roast is absolutely delicious simply sliced and served alone. However, a sharp, rich au jus that has been spiked with brandy is a perfect way to finish off this delicious cut of meat and should be prepared while the New York Roast is in the oven.

Just like any steak recipe, it is crucial that you rest your New York Strip Roast rest prior to slicing and serving. This will allow the juices to redistribute through the meat and keeps it super juicy and flavorful.

How long should you cook a New York Roast?

Using an oven-safe digital thermometer is the MOST accurate way to prepare any steak. It is well worth the investment to ensure you do not ruin an expensive cut of meat by using the right tools.

New York Roast is best served between rare to medium. I find this strip roast is the most flavorful when served medium-rare and I would never recommend cooking until medium-well or well-done, as that will completely ruin this tender cut of meat.

You need to take your NY Strip out of the oven when it is 10 degrees BELOW the temperature you desire. It will raise another 10 degrees as it rests.

A roasted steak roast is always best served immediately after preparation, as it will lose flavor when reheated.

However, if you happen to have leftovers, you can store them in an airtight container for up to 3 days in the refrigerator. For best results, heat beef stock to a simmer and then place sliced leftovers into the simmering broth for 30 seconds to heat. The stock will keep the meat from being dried out and will warm it just enough to enjoy.

Pair this impressive New York Strip Roast as I do on Christmas with Twice Baked Potatoes, Roasted Brussels Sprouts, and a Holiday Salad. Or you can pair the NY Roast with one of the following side dishes for a memorable meal fit for any holiday or special occasion.

If you enjoyed this New York Strip Roast, I would love for you to leave a comment and review below. 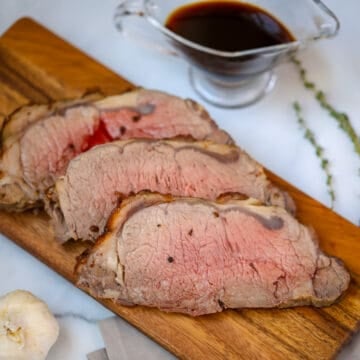 Step-by-step directions on how to make a New York Roast that is seasoned and roasted to tender, juicy perfection and paired with an au jus on the side.

Prevents your screen from going dark while preparing the recipe.

Season the Roast (12 to 48 hours before serving)

You need to take your NY Strip out of the oven when it is 10 degrees BELOW the temperature you desire. It will raise another 10 degrees as it rests.

Do not use table salt in place of kosher salt, the result will be overly salty.
Size of Roast: This method will work with any size of the New York Strip Loin Roast. If larger than 4 pounds, you may want to double the seasoning mixture to fully cover the roast.
Au Jus: The au jus is OPTIONAL! If you don’t care for brandy, you can use dry red wine in its place OR omit the alcohol altogether.

Liked this Recipe? Tag me Today!Snap a picture and tag #amindfullmom on Instagram – I would love to see!

This post was originally shared in 2018 and updated in 2022 with new photos.

Mon Nov 14 , 2022
Home coffee equipment maker De’Longhi is diving into direct-to-consumer coffee sales through a new partnership with the UK-based multiroaster subscription company Beans Coffee Club. The terms of the multiyear agreement between the two companies have not been made public, but the De’Longhi brand and logo rolled out on the Beans […] 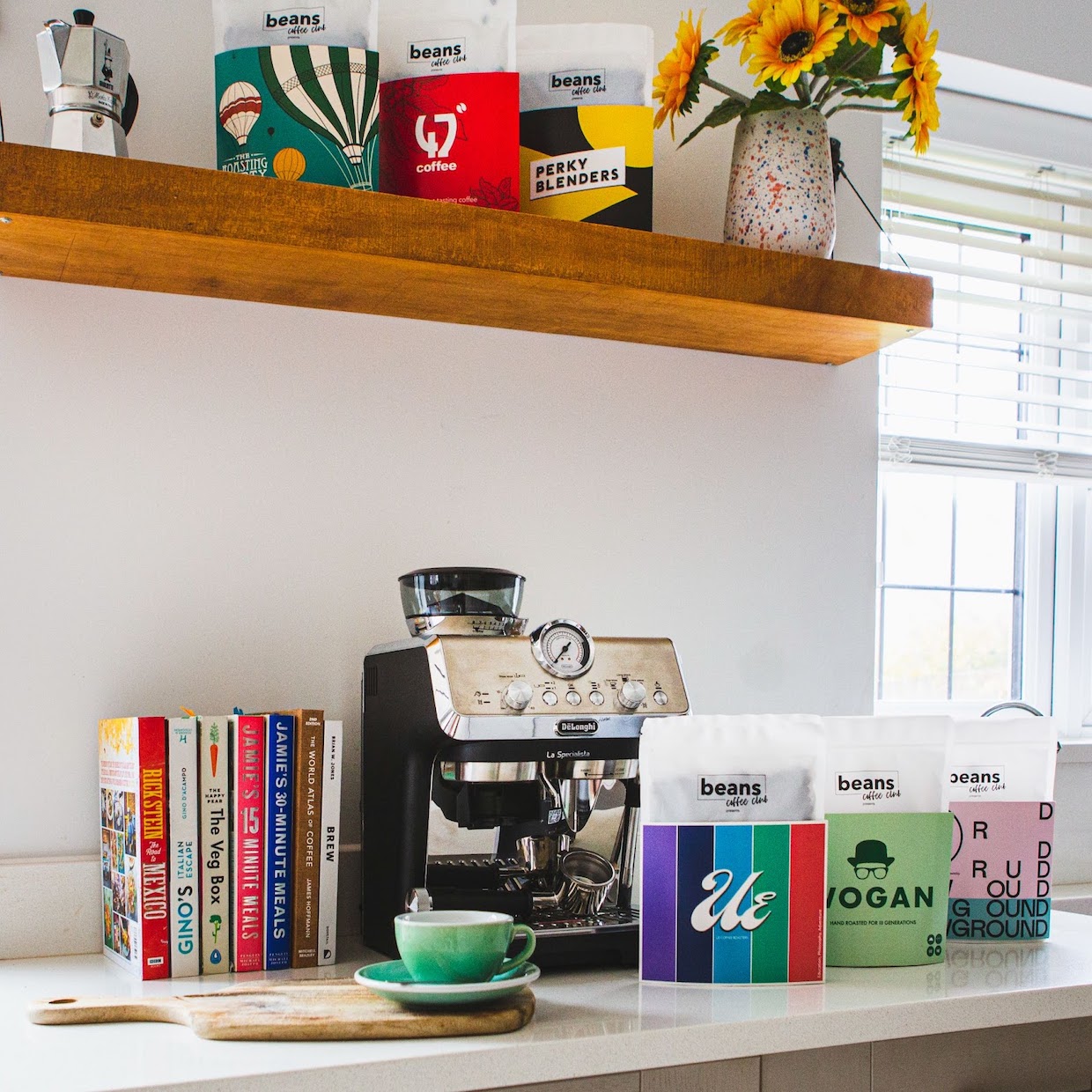