Healthy eaters love a great grain debate. First, there’s the question about whether the food category as a whole is nutritious. (Spoiler alert: Yes, very!) Then there’s the next widely discussed topic of which grain exactly is best to fill your bowl with—especially in terms of quinoa vs. rice.

Both quinoa and rice have been staples in healthy diets around the globe for centuries. Quinoa is technically not a grain, but a seed from a flowering plant in the amaranth family traditionally grown in Peru, Chile, and other parts of South America. Rice, on the other hand, was first grown in China and the West African region. It was later adopted and grown in India and other Asian countries, then in the Middle East, Europe, the Caribbean, Latin America, and North America. Rice is a cereal grain and is still the most widely consumed staple food in Asia and Africa.

In terms of their health benefits, quinoa and rice share some commonalities, but they also have distinct differences that set them apart. Understanding both is truly key to determining which one fits your nutritional needs (and personal preferences) best. Here, registered dietitian Melissa Rifkin, RD, compares and contrasts the two grains, and gives her verdict on which one she thinks is truly the healthiest.

Keep reading for everything you need to know in the quinoa vs. rice debate.

What are the nutritional benefits of quinoa?

Right away, Rifkin highlights one major benefit of loading up on quinoa: It’s high in protein, with eight grams per one-cup serving. To compare, an equivalent amount of cooked white rice has just over 3.5 grams of protein; the same amount of brown rice has around five grams. “Quinoa has a higher protein content than rice, and along with that, is considered a complete protein because it contains all of the essential amino acids,” Rifkin says. Especially if you follow a vegan or vegetarian diet and are looking for plant-based ways to get more protein, quinoa is a great staple to have on hand.

2. Quinoa is high in iron

Rifkin says another benefit of opting for quinoa instead of rice is that it’s also higher in iron, which helps red blood cells carry oxygen throughout the body and also provides the body with energy. (If you feel tired on a regular basis, not getting enough iron could be one reason why.) A serving of quinoa has three milligrams of iron, while white and brown rice both have less than one. (Most women should aim to get 18 milligrams daily.) “Iron is another nutrient that is more likely to be low in people who follow a vegan or vegetarian diet,” Rifkin says.

3. It’s a good source of fiber

Quinoa is also a fiber-packed superstar, with about five grams of the nutrient per serving while brown rice has three grams and white rice has one. Fiber is linked to everything from lowering inflammation, good digestive health, and supporting cardiovascular health. In other words: it’s super vital. A good goal to aim for is 25 grams a day, and eating quinoa will get you there quicker than rice.

Quinoa contains small amounts of calcium—about three percent of the recommended 1,000 milligrams you want to aim to get each day. (So it’s a drop in the bucket, not a go-to source.) People with uteruses especially need to be conscious of their calcium intake; not getting enough can lead to brittle bones and increase the risk for osteoporosis later in life.

What are the health benefits of rice?

1. Rice is a healthy source of carbohydrates

This is a nutritional benefit that Rifkin says quinoa and rice have in common. Despite some eating styles recommending drastically minimizing carbohydrate consumption, complex carbs like brown rice and quinoa are important because they help provide the body with energy and are also linked to boosting serotonin, the “feel good” chemical in the brain. According to the Dietary Guidelines for Americans, it’s recommended that between 45 and 65 percent of overall daily calories come from carbs. (This translates to roughly 225 to 325 grams a day, if you consume 2,000 calories.) Quinoa has 40 grams of carbs per one-cup serving, while brown rice has about 50 grams per serving.

2. Some varieties of rice are full of antioxidants

When you’re looking at the nutrient density of rice, Rifkin emphasizes that the types of rice matters. Besides white and brown rice, there’s also wild rice, black rice, basmati rice, jasmine rice, and red rice. “Color pigments present in produce and other plant-based foods, like rice, are typically indicators of antioxidants,” she says. “That’s why rice that has more color to it, like brown, black, wild, and red rice, will likely have more nutritional value than white rice. The more colorful varieties of rice will also have more fiber than white rice—another reason to choose more pigmented varieties.” There are different varieties of quinoa too, including black quinoa, red quinoa, and tri-colored quinoa. Like rice, these colorful quinoa varieties have antioxidants, too. This makes it another benefit the grains have in common.

3. Consuming brown rice regularly is good for your heart

Brown rice in particular has been scientifically linked to being good for cardiovascular health and lowering inflammation in women. Researchers credit its trace minerals, including magnesium and fatty acids, along with its fiber content. The caveat to this is that white rice was not found to have the same benefits. This is another example of how the type of rice you consume can impact health differently.

Quinoa vs. rice: Which one is healthier?

While the nutritional profiles of quinoa and rice certainly matter, so does taste. After all, if you don’t like the taste of your grain, you won’t eat it and therefore won’t reap any of its nutritional benefits. White rice has the mildest taste, with brown rice and quinoa tasting a bit nuttier. Quinoa is also smaller than rice and has a slightly rougher texture.

However, if you’re choosing a grain solely on health benefits, Rifkin says quinoa comes out on top as the more nutrient-dense choice—especially for vegans and vegetarians who will benefit from its higher protein and iron content.

That said, you can use both quinoa and rice in the same ways, in all the same dishes. Below are three recipes that use quinoa and three that use rice. Feel free to follow them as is, or sub out the grain for the one you like best. Either way, you’ll end up with a delicious, healthy meal.

This quinoa salad is a great summer dish and it’s a cinch to throw together. Besides the grain, it also has avocado, mango, chickpeas, and beans.

Get the recipe: Quinoa and bean salad

Here’s a classic example of just how interchangeable the grains can be—quinoa can work surprisingly well in a dish that literally has rice in its name. This recipe has scallions, soy sauce, garlic, and onion, which really amps up the flavor.

Get the recipe: Quinoa fried “rice”

Yet another example where quinoa can do much of the heavy lifting traditionally performed by arborio rice. Here, it has an Italian-inspired feel, mixed with tomatoes, zucchini, basil, arugula, and mozzarella cheese.

Get the recipe: Tomato and basil quinoa risotto

In this Korean dish, rice is combined with soybean sprouts. You can enjoy it as is (the sauce made with soy sauce, sesame oil, garlic, and gochugaru ensures that it’s full of flavor), or add meat or kimchi in for an even heartier meal.

Get the recipe: Kongnamul bap

Seasoning your rice with turmeric instantly gives it anti-inflammatory superpowers. In this recipe, the rice is cooked in coconut milk, which makes the texture slightly creamy and sweet.

Get the recipe: Turmeric rice

Grains aren’t just confined to dinner; you can use them in desserts too, like this rice pudding. Here, it’s made with almond milk, rose water, pistachios, almonds, coconut, and cinnamon. It’s so good you might have it again in the morning for breakfast.

While quinoa may technically be more nutrient-rich, there are health benefits to both quinoa and rice—and both are super versatile, too. Experiment by using them in different dishes. Chances are that you’ll find room in your life for both grains. And more variety is definitely a nutritional win.

Sun Aug 9 , 2020
Summer is a great time of the year to take advantage of the many fruits and vegetables that are in season. From berries to stone fruits, this is the season to reap as many nutrient-rich foods as possible. And what better way to do that than to cook with them? […] 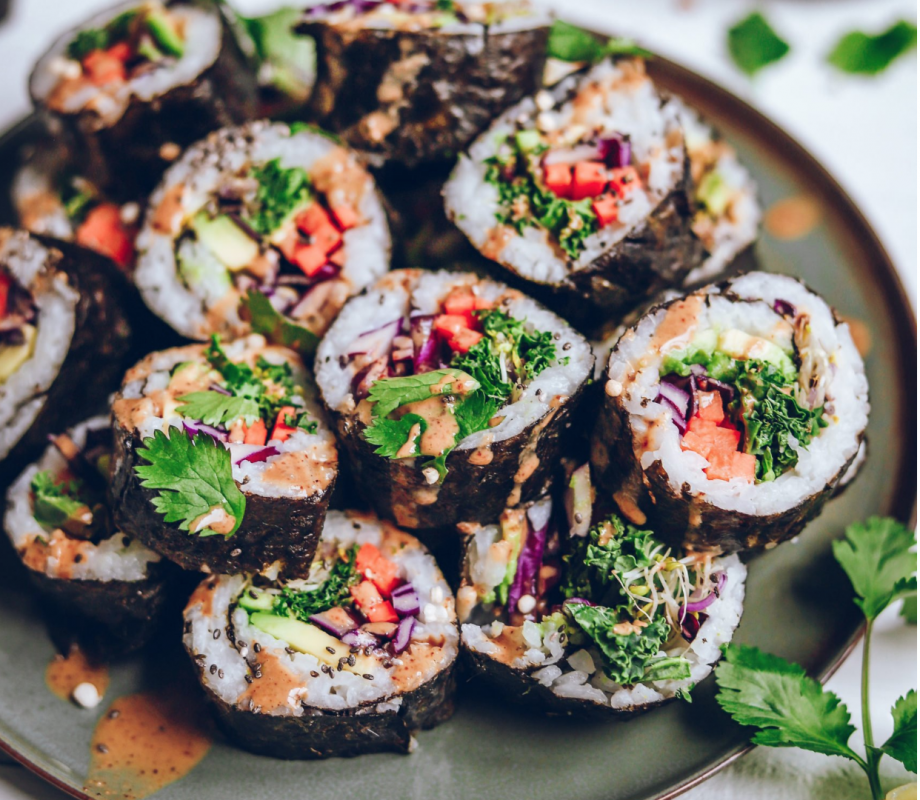