(Bloomberg) — Editor’s Note: As more people are working from home, Bloomberg Pursuits is running a weekly Lunch Break column that highlights a notable recipe from a top cookbook and the hack that makes it genius.

Here’s a word that usually dominates January conversation but has been notably absent in 2021: “diet.”

While the concept of Dry January continues to take hold—in the U.K., the number of adults taking part this year is 6.5 million, up from 3.9 million in 2020—traditional diets have not. After months of pandemic-related lockdowns, most people are not in the mood for more restrictions.

But even if a compulsion for comfort food isn’t going anywhere, a new year will always signify new intentions and an impulse toward wellness.

A recent cookbook is well suited to the moment. In The Whole Smiths Real Food Every Day: Healthy Recipes to Keep Your Family Happy Throughout the Week (Houghton Mifflin Harcourt; $30), Michelle Smith offers a long list of dishes that are easy to make and eat. The word “healthy” is subject to interpretation.

Smith began her professional career working in Bay Area startups, including a media company funded by the Silicon Valley venture capital firm Kleiner Perkins. But after starting a family there, the businesswoman began writing about food and created the Whole Smiths blog. “Diets like raw food felt pretentious and finicky; paleo required too many trips to different stores for specialty ingredients” says Smith. “I said: ‘I can make this more accessible.’” She gravitated toward the Whole30, the popular program based on eating minimally processed food for 30 days to identify what ingredients have negative effects on your body, such as sugar, grains, and alcohol.

Her first cookbook, The Whole Smiths Good Food Cookbook, was approved by Whole30. Her new one is not, because it includes products such as dairy that aren’t part of the program, but it is still geared for busy people who want to serve tasty food that’s not overly processed.

“These are recipes designed for home cooks. I’m not going to get a James Beard award here,” she says about the ambitious volumes that usually get awards. She designed the dishes to jump off what she learned about cooking and substitutions from the restricted program. “This is how you eat after you’ve done the Whole30,” she says. Compelling recipes include carnitas ramen noodles and sweet potato nachos with cilantro jalapeño aioli.

There’s also an “indulgent whole food” gratin, which features cauliflower instead of potatoes or pasta. It’s not healthy by any stretch, a point she concedes in the recipe headnote. (She says it’s for weekends and holidays.) Not only is the cauliflower gratin studded with bacon, the two-cheese sauce is infused with bacon fat.

Yet the flavor of the dish goes beyond the appeal of eating anything with multiple pork products in it. The cauliflower is roasted instead of boiled, so it has a rich, caramelized taste that stands up to the melted gruyere and asiago. She adds a sprinkle of thyme that refreshes the creamy bites.

The genius touch is the topping: Because Smith eschews gluten, her baked vegetables use crumbled pork rinds instead of bread crumbs to deliver a crispy bite. Along with the requisite crunch, they have a gamy taste that deepens the flavor of the dish.

Smith agrees that the start of this new year—one that feels so much like the old one with all the pandemic restrictions—isn’t the time to get tough on what you eat.

“Diets and resolutions feel so dated right now,” she observes. “They’re always so big, you’re supposed to overhaul everything.” Her focus is to do small things. “Take a couple steps back from all or nothing. Make slight modifications.” She adds: “The best thing for everyone is to feel like they’re taking care of themselves.”

The following recipe is adapted from The Whole Smiths Real Food Every Day, by Michelle Smith.

Meanwhile, in a medium saucepan, cook the bacon over medium heat until lightly crisped, about 7 minutes. Using a slotted spoon, transfer the bacon to a paper towel–lined plate to drain. Discard the bacon grease from the saucepan, but don’t wash out the pan. Return the saucepan to medium heat and add the butter, then let it melt. Whisking constantly, sprinkle the flour over the butter until incorporated. Slowly add the milk and cook, whisking constantly until the sauce is smooth and slightly thickened.

Add the remaining ½ teaspoon salt, the pepper, and the asiago and Gruyère, and whisk until the cheeses have melted. Remove from the heat. Add the roasted cauliflower, bacon, and thyme and stir so the cauliflower is completely coated.

Pour everything into an 8-inch-square glass or nonstick baking dish and top with the crushed pork rinds. Reduce the oven temperature to 375F and bake for about 20 minutes until the gratin starts to bubble. Let cool for 5 to 10 minutes before serving.

Fri Jan 8 , 2021
Ever have those cravings for something warm, salty, and buttery, but aren’t quite sure what to make? Joanna Gaines’s fatayer can fix that! The recipe, which Gaines made on the first episode of her new cooking show, Magnolia Table, is a classic Lebanese meat pie, and it’ll satisfy all of […] 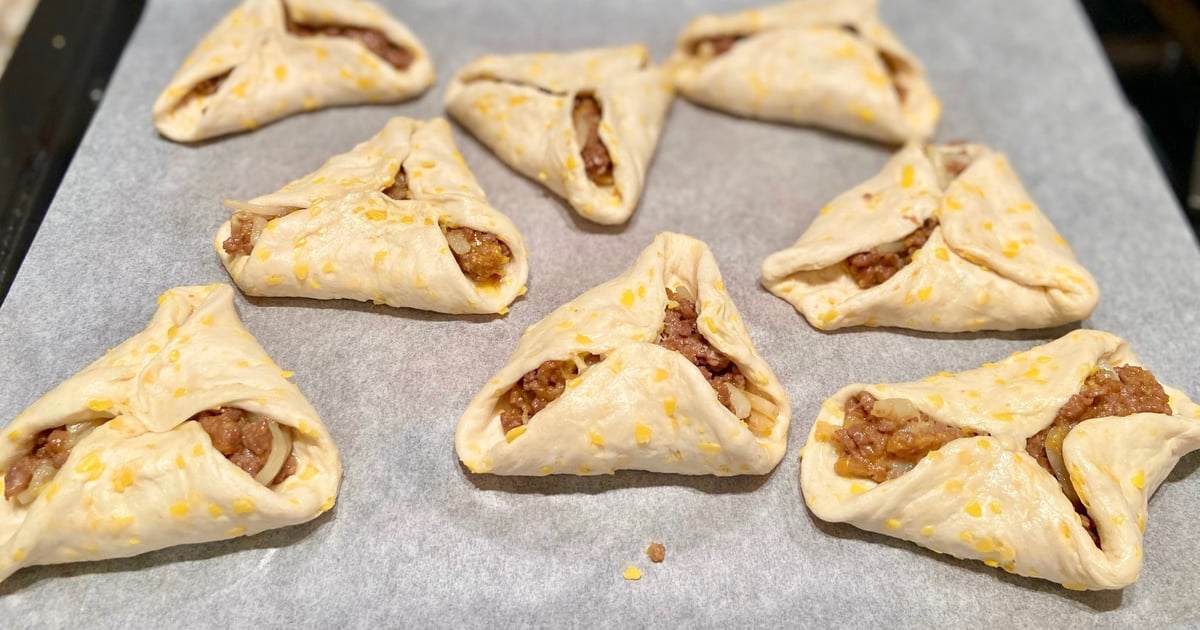