Shortly afterward, he groaned, “You’re ruining the rice,” as Patel used tap water to wash it of starch.

What Ng intended to be a comedic video sparked a firestorm of dismay and disbelief as it ricocheted around the internet, gaining more than 7 million views on YouTube and nearly 40 million on Twitter.

Many viewers, including Asian-American celebrities such as writer Jenny Yang, derided Patel’s methods for departing from how Chinese egg-fried rice is traditionally made. Patel hadn’t washed the rice before boiling it. She had added too much water. She should have used day-old rice. The scrambled egg was overcooked instead of runny.

Ng, who is based in London, tried to defuse the situation by filming a short clip with Patel announcing they are planning a collaboration. “While this guy’s blown up like nobody’s business, I’ve been trolled,” Patel said in the video, claiming she had been simply presenting the BBC’s recipe and that “I know how to cook rice.”

The BBC has not publicly commented on Ng’s or Patel’s remarks.

Rice is a staple ingredient in Asia, and has been adopted by cuisines globally since it was first domesticated in China more than 9,400 years ago, according to Chinese researchers. There are countless ways to prepare rice — you can steam it, fry it, simmer it slowly in broth like Italian risotto or scorch it to develop a crispy crust like Iranian tahdig.

But the issue at hand goes beyond a difference in opinion on the varying methods of cooking rice.

The controversy over the BBC Food clip, and the reaction it provoked within certain Asian communities, speaks to a broader, long-standing debate about the intersection of food, ethnicity and culture — the fundamental question of who is allowed to cook what food.

Countless White chefs in recent years have been accused of cultural appropriation by creating food from other ethnic groups using methods and phrases that are deemed “unauthentic,” disrespectful, and sometimes outright racist.

Last year, for instance, an Asian food critic accused celebrity chef Gordon Ramsay of tokenism, after he launched a restaurant described in promotional material as “an authentic Asian eating house.”

The restaurant didn’t differentiate between wildly different and unique types of Asian cuisines, lumping them all together as generically Asian. And at the time of the opening, it did not appear to have any Asian chefs.

CNN reached out to Ramsay’s restaurant group for comment after the initial controversy.

Tokenism is when racial, ethnic, or cultural diversity is emphasized only on a symbolic level, without much substantial effort to understand that culture — in Ramsay’s case, labeling a restaurant “Asian” without taking the time to differentiate between these individual nuanced cuisines.

Food is not just sustenance, it carries history and heritage, which is why many people are deeply offended when these traditional methods of cooking are cast aside.

One notorious example is the Chinese-inspired restaurant Lucky Lee’s in New York. When it opened in 2019, the White owner said it would serve “clean” food that wouldn’t make people feel “bloated and icky” afterwards — the implication being that regular Chinese food was somehow unhealthy. That sparked uproar and the restaurant closed eight months later.

And then there are chefs who fail to acknowledge a dish’s ethnic origins at all — the equivalent of whitewashing food.

The New York Times food columnist Alison Roman, also a White woman, gained internet fame for her recipe for a “Spiced Chickpea Stew with Coconut and Turmeric” — which sounds an awful lot like an Indian or Jamaican curry. But in an interview with Jezebel, she said: “I’m like y’all, this is not a curry … I’ve never made a curry.” Roman’s refusal to call it a curry and her denial of its ethnic background prompted critic Roxana Hadadi to call it “colonialism as cuisine.”

In response to the backlash, NYT eventually added a line in Roman’s recipe on their website, saying it “evokes stews found in South India and parts of the Caribbean.”

But some people have pushed back against the idea of cultural appropriation.

Gatekeeping food prevents innovation, some say: for instance, fusion foods are born from chefs experimenting with different cuisines. Many also point out that food is meant to be shared, and its power is often directly tied to the communal eating experience.

Setting boundaries around food — for example, saying only Chinese people can cook Chinese food, or Chinese food can only be cooked a certain way, as those reacting to Ng’s video posit — seems like the antithesis of this sharing spirit in our globalized world.

But sharing is different from appropriating without respect, especially when the chefs who do it profit from portraying those foods.

A reckoning in food media

The Uncle Roger video is the latest in a string of incidents that have drawn attention to issues surrounding food and culture. This summer has seen the reckoning on race and racism, embodied by the Black Lives Matter movement, spread from the streets to newsrooms and companies.

Within food media, Bon Appetit — owned by Conde Nast — is the best-known example. Current staffers, including assistant food editor Sohla El-Waylly, accused the company of underpaying and exploiting employees of color, and viewers called out the brand for numerous instances of food appropriation.

For instance, irate viewers pointed to the time Bon Appetit had a White chef demonstrate how to cook Vietnamese pho, with the title “PSA: This Is How You Should Be Eating Pho.” There was also the time they “reinvented” the Filipino dessert Halo-halo by stuffing it with gummy bears and popcorn, spurring scorn from readers.

Each time, the brand would issue an apology and a promise to do better — but it has been happening for years.

After this summer’s explosive allegations, the company released a statement in June, acknowledging that “BA’s recipes for Vietnamese pho, mumbo sauce, flaky bread, and White-guy kimchi all erased these recipes’ origins or, worse, lampooned them.”

“In all these cases and more, BA has been called out for appropriation, for decontextualizing recipes from non-White cultures, and for knighting ‘experts’ without considering if that person should, in fact, claim mastery of a cuisine that isn’t theirs,” wrote Joey Hernandez, BA’s research director, in the statement.

The Bon Appetit debacle also prompted other questions about biases within established institutions. Who chooses what dishes get more coverage? Why do publications continue to use language that frames “ethnic” food as occasionally bizarre and often incomprehensible — for example, Bloomberg calling tofu a “white, chewy and bland” food people are “learning to love?” Bloomberg eventually removed these phrases from their article after international backlash.
And why are “ethnic” chefs — a euphemism for non-Whites — often paid less? Bon Appetit fans were further outraged when Somali chef Hawa Hassan revealed last month that she was only paid $400 per video, and El-Waylly blasted Bon Appetit for only paying her $50,000 to “assist mostly white editors with significantly less experience than me.”

These themes sound abstract at times — but they’re linked to and help perpetuate broader real-life inequalities such as workplace discrimination, pay inequity, power imbalances and prevailing Whiteness in the food world.

Ng and Patel may not have intended for their respective videos, and upcoming collaboration, to raise these questions.

But viewers’ frustrations are inherently tied to the idea that there is an authentic way to cook fried rice, and that Patel’s errors are made worse by the fact she is a non-Chinese chef presenting herself as an authority on the dish.

“FOR ANYONE WHO IS TRYING TO SAY THERE ARE MULTIPLE WAYS OF COOKING RICE, WELL OF COURSE THERE ARE. AND I LOVE THEM ALL,” tweeted Yang, the Asian American writer. “BUT THIS IS *NOT* HOW YOU MAKE DELICIOUS FRIED RICE, THE DISH OF MY PEOPLES, THE SUBJECT OF THIS VIDEO.”

The 3 Best Multivitamins for Women Over 40, According to a Nutritionist

Thu Jul 30 , 2020
In a perfect world, we’d get all of our essential vitamins and nutrients from food. But given the influx of processed foods and artificial ingredients in our modern-day diets, that’s not always the case. That’s where a daily multivitamin can help, especially if you’re over 40. “Women aged 40-plus are […] 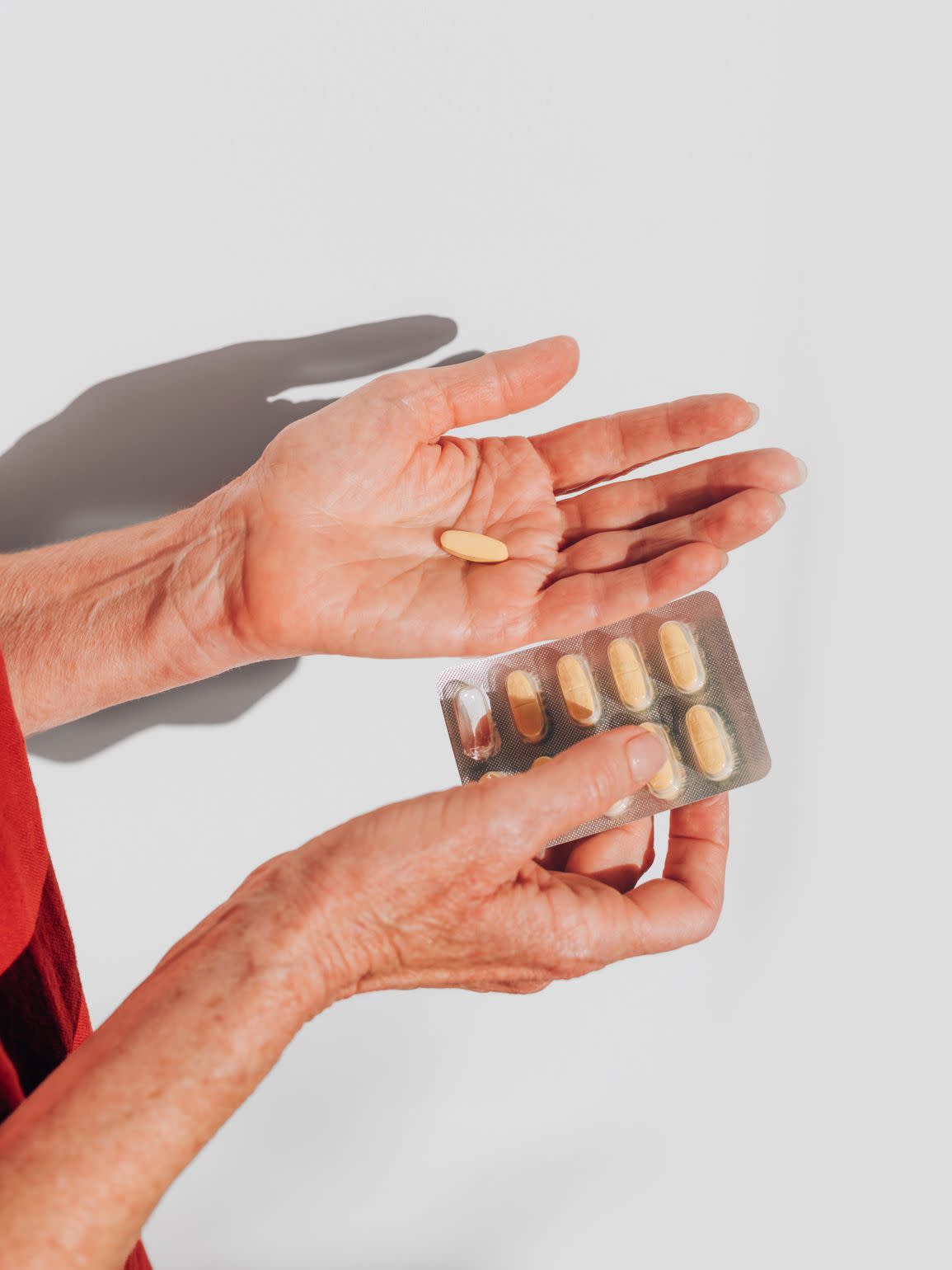