Food tells our history, and that history is passed down through the cooks in our own families. Those are the kinds of stories that Toni Tipton-Martin hopes to bring to Boston and beyond, as the new editor-in-chief of Cook’s Country.
The magazine and its public television show are part of the Boston-based America’s Test Kitchen franchise, and Tipton-Martin is the first person of color to lead an America’s Test Kitchen publication as editor in chief. She joins us to take listener calls and talk more about her vision for Cook’s Country.

One Pan Turkey with Stuffing and Cranberry Sauce, from Toni Tipton-Martin

Why This Recipe Works
“We were after a holiday-worthy turkey and stuffing cooked together in one pan, not just to cut down on dirty dishes but also to create a stuffing packed with savory poultry flavor. Using a 6-pound turkey breast (instead of a whole bird) made for easier carving and eliminated one of the hardest parts of cooking turkey: trying to sync the cooking times for white and dark meat. For an homage to classic Thanksgiving stuffing, we used a combination of sage, thyme, onion, wine, and chicken broth; hot Italian sausage added deep meaty savoriness. Instead of small cubes of sandwich bread, we opted for larger chunks of ciabatta; the bigger pieces retained some chew even as they soaked up the flavors from the turkey and sausage. We roasted the turkey breast on top of the stuffing and, when the breast was done, removed it and returned just the stuffing to the oven to create a crisp top that nicely contrasted with the chewy chunks of bread below. For a final holiday flourish, we stirred together a vibrant, bright, and gorgeous sauce with pomegranate seeds and parsley.”
Serves 8 to 10
Estimated Time: 3½ to 4 hours, plus 2 hours salting
The salted turkey needs to be refrigerated for at least 2 hours before cooking. If you can’t find a loaf of ciabatta, you can substitute 2 pounds of another rustic, mild-tasting white bread. Do not use sourdough here; its flavor is too assertive.
Turkey

1. For the turkey: Combine salt, pepper, and thyme in bowl. Place turkey on large plate and pat dry with paper towels. Sprinkle all over with salt mixture. Refrigerate, uncovered, for at least 2 hours or up to 24 hours.

2. For the stuffing: Adjust oven rack to lower-middle position and heat oven to 325 degrees. Spray large heavy-duty roasting pan with vegetable oil spray, then add oil to pan. Heat oil in roasting pan over medium heat until shimmering. Add onion and ¼ teaspoon salt and cook until onion is golden brown, about 10 minutes. Add garlic and cook until fragrant, about 30 seconds.

3. Off heat, stir in broth, wine, sage, thyme, pepper flakes, and remaining 1½ teaspoons salt, scraping up any browned bits. Add bread and, using tongs or your hands, toss until bread is evenly coated. Break sausage into ¾-inch chunks and toss with bread mixture to combine.

4. Nestle turkey, skin side up, into stuffing in center of roasting pan. Roast until thickest part of turkey registers 160 degrees, 2¼ to 2¾ hours.

5. For the sauce: Meanwhile, combine all ingredients in bowl; set aside.

6. Transfer turkey to carving board, skin side up, and let rest, uncovered, for at least 30 minutes or up to 1 hour.

7. Meanwhile, stir stuffing in roasting pan. Return pan to oven and cook until top of bread looks golden brown and is evenly dry, 10 to 15 minutes.

To Use a Disposable Roasting Pan

Heat oil in 12-inch skillet over medium heat until shimmering. Add onion and ¼ teaspoon salt and cook until onion is golden brown, about 10 minutes. Add garlic and cook until fragrant, about 30 seconds. Off heat, stir in broth, wine, sage, thyme, pepper flakes, and remaining 1½ teaspoons salt, scraping up any browned bits. Transfer mixture to 16 by 12-inch disposable aluminum roasting pan. Add bread and sausage as described in step 3. Place disposable pan on rimmed baking sheet before roasting for added stability. Increase roasting time for turkey in step 4 to 2½ to 3 hours. Increase cooking time for stuffing in step 7 to 30 to 35 minutes.

Wed Nov 25 , 2020
If you’re still deciding on the perfect side dishes for Thanksgiving dinner, Kamala Harris is here to help. Ahead of the holiday on Nov. 24, the vice president-elect shared one of her family’s “favorite Thanksgiving recipes,” her cornbread dressing, on Instagram and Twitter. “During difficult times I have always turned […] 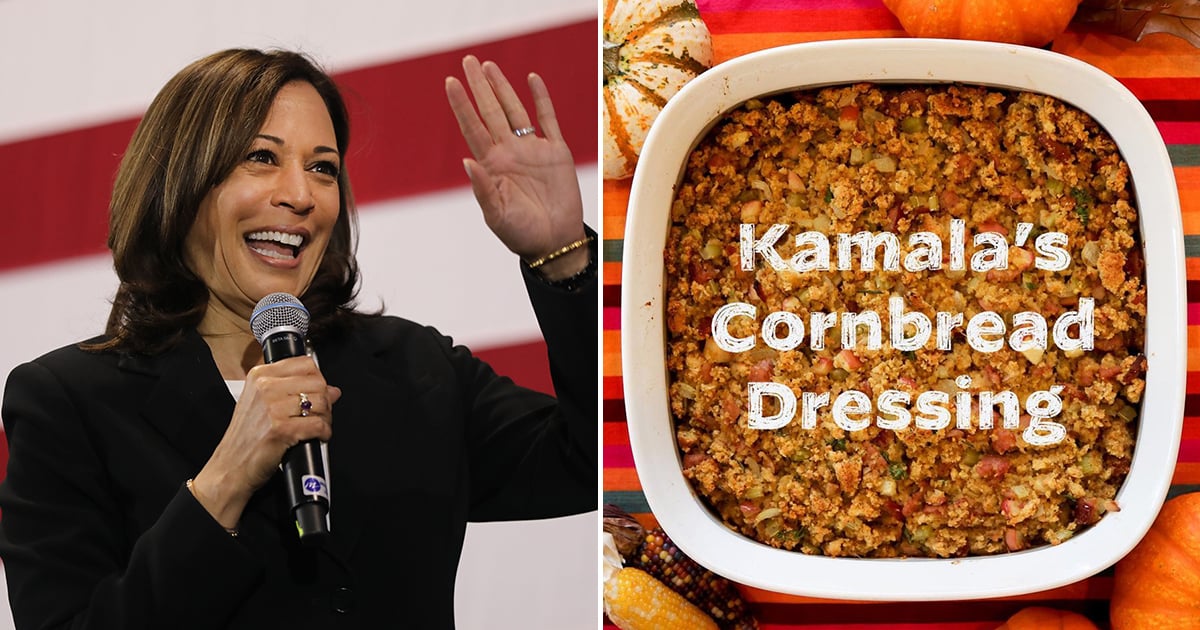