This week, Starbucks and A&W Canada unveiled their latest strategies for ending disposable-cup waste with the introduction of reusable and compostable options, respectively.

Starbucks ditching disposables for reusables — will customers go for it? 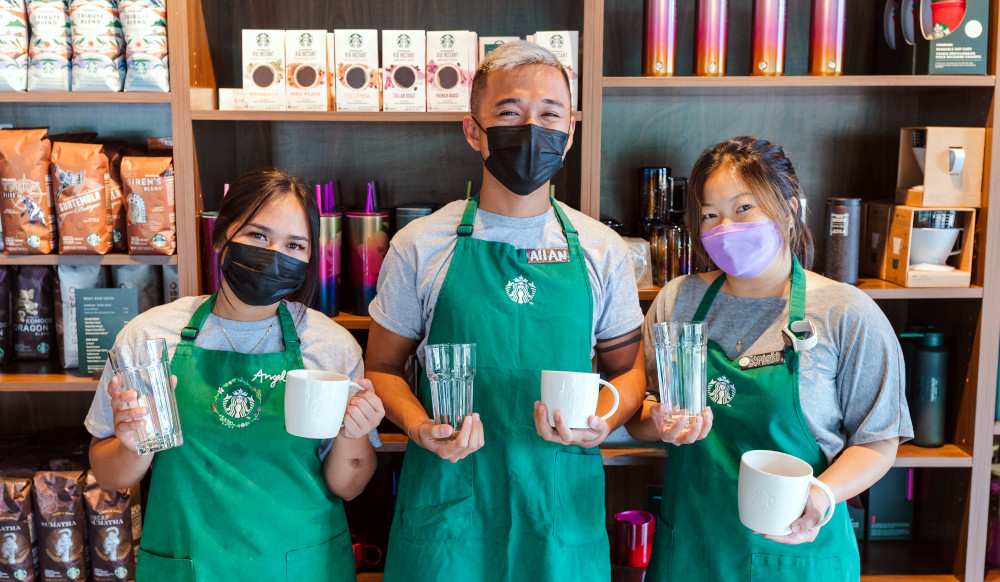 Starbucks announced this week that it will be phasing out its ubiquitous
green-and-white disposable coffee cup and introducing various incentives for
customers to either bring their own cups or choose a reusable one — as well as
disincentives for using disposable options. The move should push the coffee
giant closer to its goal of a 50 percent reduction in waste from stores and
manufacturing by 2030 — part of its long-term plan to become a
resource-positive
company.

As Chief Sustainability Officer Michael Kobori told
CNN:
“Our cup is ubiquitous, and we love that. But it is also this ubiquitous symbol
of a throwaway society.”

Starbucks told CNN it plans to test a disposable-cup fee and discounted prices
for customers who use a Starbucks ceramic mug in stores. With COVID
measures
continuing to ease, the company has also been gradually allowing customers to
bring their own cups again — Starbucks says it plans to allow this at every
location in the US and Canada by the end of 2023, CNN says, even if they
order ahead or use the drive-thru.

The Seattle-based company is also testing what it’s calling a “Borrow a Cup”
program, in which customers can get their beverages in a reusable cup they
borrow from a store location — once they finish with the cup, they can return it
to be cleaned and used again. Starbucks is experimenting with the model in
several markets to help determine which approach (incentives, disincentives or
borrowing) will appeal most to customers, as well as how much water would be
used to clean the cups and other sustainability considerations.

Starbucks is a founding partner of the NextGen Cup Consortium, launched in
2018 to advance sustainable packaging innovation and recycling
infrastructure
to help end foodservice packaging waste — with an initial focus on redesigning
the single-use hot and cold fiber cup. The NextGen Cup Challenge sourced 480
solutions globally to redesign the cup, selecting 12 winning
solutions
in 2019 across three areas: innovative cup & cup liners, new materials, and
reusable service models — for the latter, shifting from disposables to
reusables
can save foodservice companies an estimated $5 billion a year in procurement
costs and avert 7.5 million tons of materials from landfills and waterways
annually.

Megan Lagesse, who leads global communications for Starbucks, told the Wall Street Journal that eliminating single-use cups — which, along with their lids, make up 40 percent of the company’s packaging waste and 20 percent of its global waste — is the ultimate goal; but a lot of work and testing need to be done in the meantime.

Throughout this testing phase, CNN pointed out that it’s crucial for Starbucks’
mobile order and drive-thru experiences to remain
seamless. Just a few sluggish pickups could be enough for customers to take their business elsewhere.
Starbucks also has to be careful not to make things more burdensome for
employees, who already have to prepare complicated, customized orders at high
speeds; and many Starbucks workers across the country are pushing for
unionization,
against the wishes of the company’s leadership. 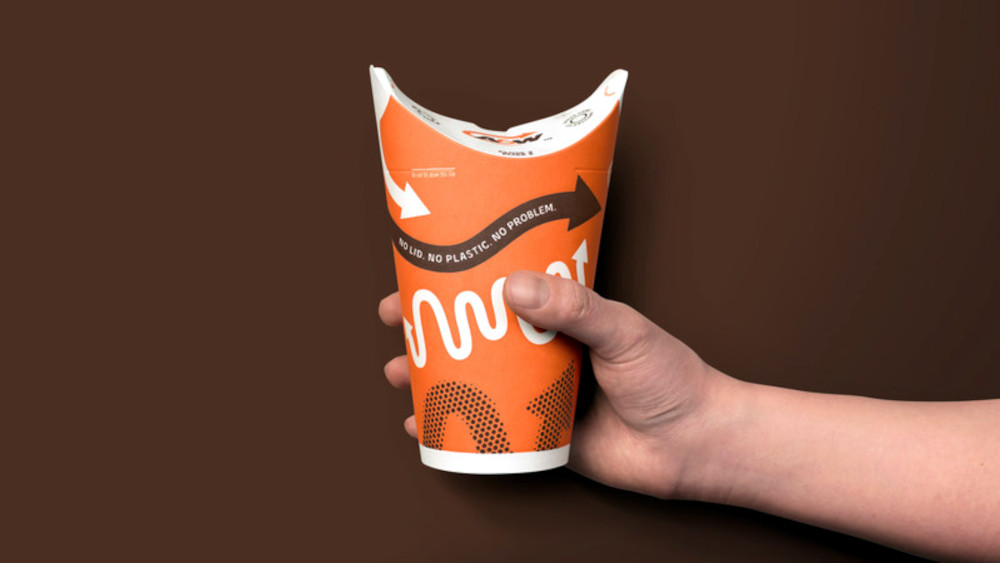 Meanwhile, a little further north — this week, A&W Canada became the first major
quick-service restaurant (QSR) brand to pilot an innovative, sustainable cup
design in participating restaurants across Toronto, in an effort to curtail the
estimated 5 billion single-use cups that end up in Canadian landfills each year.

A&W’s strange-looking Zero Cup requires no lid or straw, contains no plastic
liner, and is fully compostable and recyclable. Designed by UK-based
ButterflyCup, the all-paper Zero Cup has a unique, water-based coating that
prevents leaks. A&W is the first major brand in North America to use the cup.

“Each year, A&W Canada serves millions of takeout drinks; so, finding a more
sustainable single-use cup solution is one way we can make a big difference,”
says Susan Senecal, President & CEO of A&W Canada. “Our new Zero Cup is an
exciting step in our journey to reach zero waste. Part of achieving that mission
is pioneering the innovations that people need to live more sustainable lives.
This new cup is one small way Canadians can take small, simple actions, one day
at a time.”

A&W will preview the Zero Cup on March 25-26 at Toronto’s Evergreen
Brickworks, at a temporary installation called Tomorrow Cafe — where
guests can try the Zero Cup, along with a free cup of A&W’s organic,
Fairtrade coffee. The installation, open to the public on Friday, March 25
from 12:30-3:30pm and Saturday, March 26 from 8:00am-4pm, will also
explore A&W’s sustainability
innovations past, present and
future — and invite visitors to share innovations they would like to see in the
food retail space.

The Zero Cup is the latest initiative in the company’s long-time commitment
to innovation in sustainability. In addition to impressive waste-reducing
measures (including eliminating plastic straws and using metal baskets,
compostable burger packaging, ceramic plates and metal cutlery) and improving
the sustainability of its menu options (by switching to grass-fed and -finished
beef, and being the first in Canada to feature the Beyond burger); on the
cup front, last year, the chain launched a circular mug pilot
program
called the A&W Cup Crew in Vancouver. A&W Canada is also joining a pilot
program with Return-It to explore ways to recycle existing single-use coffee
cups.

Mon Mar 21 , 2022
A great baking recipe can seem like wizardry. A handful of unassuming pantry staples are mixed together and heated (or sometimes chilled), and what results can anchor a celebration or simply make a bad day better. In the most brilliant of cases, it can surprise and delight with its inventiveness. […] 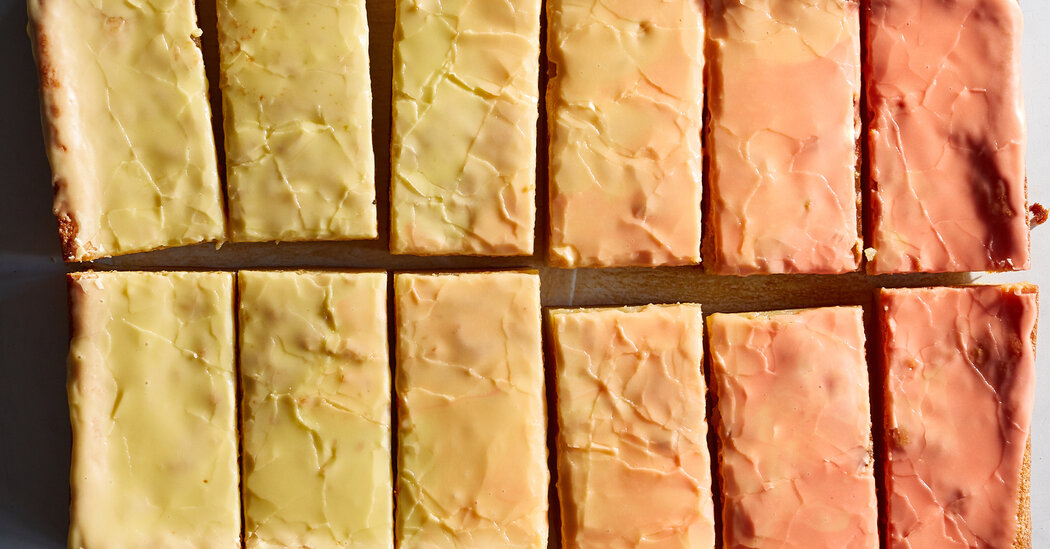