Holey Grail Donuts plans to deliver a taste of Hawaii to the mainland United States with a vegan version of America’s favorite pastry: the doughnut. The Hawaiian doughnut shop just raised $9 million with the help of skateboarding legend Tony Hawk to begin its expansion across the United States. Holey Grail Donuts‘ specialty doughnut recipe uses taro – a highly sustainable and starchy plant popular in Hawaiian cuisine

Currently, the company operates two stores in Honolulu and Hanalei and one food truck in Waikiki. Holey Grail plans to start its expansion with two locations in Los Angeles are – Santa Monica and Larchmont. Soon after, a food truck will serve up the taro-based donuts to customers at The Platform in Culver City.

“We are taking something that everyone is familiar with, and reinventing it to meet our values, while essentially improving the tastes without the negative health and environmental consequences,” Nile Dreiling told TechCrunch. “The process we incorporate yields a donut base that’s hot and crispy and not too sweet, which is the perfect vessel for essentially consistently rotating the garnishes. We currently have over 60 flavors that we’ve developed over the past couple of years.”

“There’s a thrilling enthusiasm building around Holey Grail Donuts that reminds us of some of the other prolific food and beverage brands of our time,” Conrad said in a statement. “At the same time, Holey Grail Donuts is humbly unique in its approach to food and commitment to sustainable, plant-based ingredients while focusing intently on what customers care about most: taste. Nile and Hana are creating something really special.”

Now, Holey Grail Donuts aims to capitalize on the rapidly expanding doughnut market, which is expected to reach $5.02 billion by 2025. A market report from Technavio claims that 35 percent of the growth can be attributed to North American business. With growing vegan interest, the demand for plant-based doughnuts is likely to rise in the coming years.

What makes a doughnut vegan? Most conventional doughnuts (from chains including Krispy Kreme and Dunkin’ Donuts) contain animal-based ingredients such as eggs and dairy. While Holey Grail does not market its selections as vegan, the taro-based recipe excludes conventional butter, milk, and egg ingredients. Currently, the Dreiling siblings have created approximately 60 doughnut flavors with plans to include more.

Holey Grail’s signature doughnut flavors include the Hail Mary with cardamom and rose petals; the North Shore with Kauai-grown turmeric, black pepper, and tangelo; and L&L with lime curd, lemon zest sugar, finger lime caviar, and begonia petals. The expertly designed taro doughnuts are created with the help of a proprietary robot – helping keep an employee stuck to the fryer all day. Some donuts flavors are not vegan due to honey or bee pollen toppings, but these menu items are clearly marked for customers.

To find delicious plant-based fare in your area, check out The Beet’s Find Vegan Near Me.

Sat Jul 30 , 2022
If you have the Tim Hortons app installed on your phone, you might have gotten an email about a proposed lawsuit settlement today. The coffee chain landed a national class-action lawsuit when it was revealed that it had tracked “vast amounts” of information from Canadians through its app for years. […] 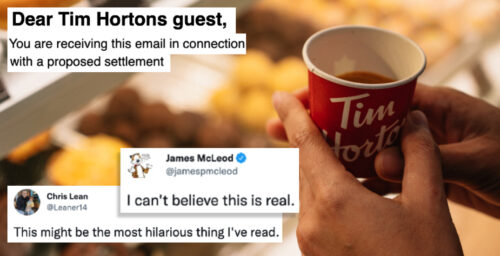