According to Francisco Guerreiro, “It is a fact that humanity is negatively impacting the planet with its industrialised way of life.” The Portuguese Greens/EFA deputy is unequivocal in his view that urgent change needs to come for the sake of future generations.

And as a committed vegan and animal welfare activist, Guerreiro is walking the talk. “Humankind has evolved in such a way that we are now fully aware of the importance of shifting towards a society that is non-violent, more equal and based on a model of positive development. Nevertheless, it remains to be understood by many that the real change that will allow us to achieve these goals starts with our own daily habits.”

Guerreiro believes that veganism – a plant-based diet avoiding all animal foods such as meat, dairy, eggs and honey – embraces this human responsibility of caring for the planet, protecting our own health and biodiversity and treating with compassion the other living beings with whom we share the planet.

“Choosing a plant-based diet allows us to drastically reduce our carbon footprint, which is what we need in order to curb the depletion of ecosystems and avoid the sixth mass extinction that is already on its way” Francisco Guerreiro MEP

“We must keep in mind that animal farming is responsible for 70 percent of agricultural CO2 emissions. Choosing a plant-based diet allows us to drastically reduce our carbon footprint, which is what we need in order to curb the depletion of ecosystems and avoid the sixth mass extinction that is already on its way. According to Greenpeace, we must reduce our meat intake to 300g per person per week by 2050, bearing in mind that the current average is 1.58kg.”

Fellow Greens deputy Tilly Metz agrees, pointing out that the global livestock sector is estimated to account for 14.5 percent of human-induced greenhouse gas emissions. She adds, “Other well-documented environmental impacts of intensive animal agriculture include the disproportionate use of fresh water, water pollution and the acidification of oceans, the perturbation of nitrogen and phosphorus cycles, and deforestation and loss of biodiversity due to the expansion of cultivated land.”

According to The Vegan Society, a plant-based diet requires only one third of the land needed to support a meat and dairy diet. It adds, “Avoiding animal products is not just one of the simplest ways an individual can reduce the strain on food as well as other resources, it’s the simplest way to take a stand against inefficient food systems which disproportionately affect the poorest people all over the world.”

Turning to animal welfare, Metz says that adopting a more plant-based diet leads to less animal suffering. “Even in the European Union, the majority of the billions of animals raised each year for food, downs, leather or fur, are ‘farmed’ intensively. No one can pretend they haven’t seen footage of the often-atrocious conditions inside factory farms. Consumers shifting to a more plant-based lifestyle refuse to support these systems through their daily choices, while vegans outright refuse to contribute to the exploitation of animals in any shape or form.”

Metz adds that the recent rise in flexitarians (those that are primarily vegetarian but occasionally eat meat or fish), vegetarians and vegans shows there is growing awareness and empathy for this suffering. While every move towards adopting a plant-based diet undoubtedly helps, The Vegan Society argues that going vegetarian is not enough, explaining that the suffering caused by the dairy and egg industry is less well publicised than the plight of factory-farmed animals.

“The production of dairy products necessitates the death of countless male calves that are of no use to the dairy farmer, as well as the premature death of cows slaughtered when their milk production decreases. Similarly, in the egg industry, even ‘ethical’ or ‘free-range’ eggs involve the killing of the ‘unnecessary’ male chicks when just a day old.”

Beyond environmental and animal welfare considerations, many people choose to adopt a plant-based lifestyle for the sake of their own health. Dr Michael Greger, the founder of Nutrition-Facts. org and one of the leading American physicians advocating for a whole-foods, plant-based diet, says in his bestselling book “How Not to Die” that many people assume that our manner of death is pre-programmed into our genes: high blood pressure by 55, heart attacks at 60, perhaps cancer at 70.

However, he points out that for the leading causes of death, science shows that our genes only account for 10-20 percent at most. “Maybe it’s time we stop blaming genetics and focus on the more than 70 percent that is directly under our control. We have the power.”

Dr Greger goes on to say that a more plant-based diet may help prevent, treat or reverse every single one of the fifteen leading causes of death, including coronary heart disease, lung cancer, brain diseases, infections and high blood pressure. “The one unifying diet found to best prevent and treat many of these chronic diseases is a whole-food, plant-based diet, defined as an eating pattern that encourages the consumption of unrefined plant foods and discourages meats, dairy products, eggs and processed foods.”

Metz agrees that food is one of the primary determining factors in human health. “While doctors long promoted meat and dairy consumption for strong bones and overall health, the tide in the scientific community has slowly started to turn over the last few decades.

“There is now a clearly established link between the heavy consumption of animal products and nontransmittable health conditions such as diabetes, cancer and cardiovascular diseases” Tilly Metz MEP

There is now a clearly established link between the heavy consumption of animal products and non-transmittable health conditions such as diabetes, cancer and cardiovascular diseases,” she says, adding, “It is therefore not surprising that physicians increasingly encourage patients to shift to a whole-foods, plant-based diet, rich in fibres and healthy, unsaturated fats. In the current context of a global pandemic, one might also point to the links between animal agriculture, land-grabbing and the emergence of zoonoses, as well as the rise of antimicrobial resistance through the excessive use of antibiotics in intensive animal farming, as additional reasons to switch to a more plant-based diet.”

While praising the scientific and medical communities for “playing a fundamental role in raising societal awareness of these worrisome facts, which has led many to change their diets and consumption patterns,” Guerreiro adds that although decision makers are also becoming more aware, “political action is still being taken at a pace that does not match the urgency of the situation.”

He says that as an MEP, one of his responsibilities is to guarantee that the planet’s natural resources are preserved and that biodiversity is protected. “Ending public and private investment in polluting industries and promoting plant-based agriculture and diets are examples of issues I have been pushing for in the Committees I am in (Agriculture, Fisheries and Budgets). It is the duty of the European Parliament to challenge the current economic, social and cultural paradigms as a way to transition towards a more sustainable society and I am committed to doing so.”

“No one can pretend they haven’t seen footage of the often-atrocious conditions inside factory farms. Consumers shi­fting to a more plant-based lifestyle refuse to support these systems through their daily choices” Tilly Metz MEP

Guerreiro and Metz are not alone in their crusade to raise awareness of the many benefits of going plant-based; in early 2019, 40 MEPs signed a statement of support for the Million Dollar Vegan campaign, which encourages people to fight climate change with diet change by going vegan for Lent. In a statement the deputies said, “Abstaining from animal products for the 40-day period of Lent, or for any other occasion, makes a difference for the planet and the footprint we each leave on the Earth. If every person went vegan for Lent, it will be the equivalent to the whole of Germany not emitting CO2 for a year.” The statement ended, “It is time for solutions. Climate change will impact every country, person and ecosystem on the planet. We need to act now – everybody is able to positively contribute to being a part of the solution.”

We can all be a part of the solution by starting with what we put on our plates. In the words of Plato: “The Gods created certain kinds of beings to replenish our bodies; they are the trees and the plants and the seeds.”

Mon Sep 21 , 2020
Multinational food giant Mondelez International Inc (NASDAQ: MDLZ) is looking to buy brands that produce snacks thought to be healthy, the Financial Times reported Sunday. What Happened: The maker of sugary snacks such as Oreo Cookies and Cadbury chocolates is redoubling its efforts to venture into healthy snacks by reducing its stake worth […] 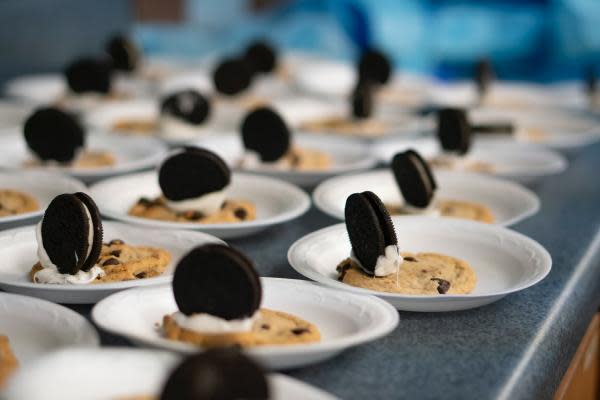