(Bloomberg) — Every day for Lynn feels like a struggle to get enough to eat. She’s also in a battle to stop putting on weight.

When Britain went into lockdown, market stalls closed and shoppers were told to limit outings for essentials at stretched supermarkets. Lynn, a 38-year-old mother of four who relies on state support, could no longer scour her neighborhood in east London for the best bargains on apples or milk. With her options limited, she’s put on almost 30 pounds (14 kilograms) since March.

“We’re having lots of beans on toast, something on toast—everything on toast,” Lynn said on a video call. She now weighs more than 200 pounds. “And that’s the problem I’m struggling with at the moment: Fruit is expensive.”

Lynn’s predicament cuts to the heart of a paradox as coronavirus widens health and financial inequalities and worsens food poverty: some people are eating more, but in many ways, it’s less. She is one of roughly 20 million adults who aren’t able to afford healthy foods in the U.K. alone, according to estimates from think tank Demos. If the global rise of unhealthy eating and obesity isn’t tackled, related health costs will exceed $1.3 trillion a year in the next decade, the United Nations warns.

It’s no secret that the cheapest food in the western world is often the stuff that’s worst for you: fast meals and ultra-processed food, usually loaded with salt, fat and sugar. For the poorest, it’s typically what they can afford, and that’s only grown more acute during the coronavirus pandemic.

Unhealthy diets are poised to worsen the obesity problem all over the world, contributing to a “global pandemic in its own right,” the UN’s Food & Agriculture Organization said in July. Healthy and nutritious food has already been out of reach for more than 3 billion people. With economies sinking and unemployment at historic highs, millions more will find themselves trying to balance their budgets with the need for vital portions of fresh fruit, vegetables and proteins.

The U.K. stands out because of a food culture that became less focused on healthy diets. Going all the way back to the Industrial Revolution, the nation’s citizens were cut off from traditional rural diets faster than the rest of Europe. Today, almost two-thirds of people in the country are overweight or obese, the highest rate in Europe after Malta. The British eat more sweet and savory snacks than anywhere in the European Union except for Ireland and have the greatest tendency to consume ultra-processed foods, all while eating less fruit.What you need to know: Tracking the Unprecedented Food Crisis Brought on by Covid-19

The problem is likely to grow more acute after the country’s economy plunged deeper into recession than any other Group of Seven member based on year-on-year figures. Demand among U.K. households for food aid has risen more than in most European nations as incomes, already squeezed after a decade of government spending cuts, get hit by the fallout from the pandemic.

“It’s not unusual for people to have 15 pounds ($20) a week to spend on food,” said Megan Blake, a senior lecturer at Sheffield University who specializes in food security and food justice. “This notion of nutrition—feeding their kids and their families well—is very much there, but the constraints on being able to achieve that are also very extreme.”

The situation, of course, is relative. The UN estimates that as many as 132 million people could be tipped into chronic hunger by the end of the year because of the fallout from the pandemic. In the developed world, though, obesity is a bigger threat than starvation.

Globally, there are now more overweight and obese people than hungry ones, with the U.S. near the top of the charts. Obesity rates in some of the richest nations are still double, or sometimes even larger, than those of the poorest nations, even as developing countries catch up as western-style processed foods get ever more ubiquitous.

While the drivers of obesity in the U.K. are complex—ranging from environment to education—income is a vital factor and a person’s weight can be one of the sharpest markers of food inequalities. Those on the lowest incomes, and many ethnic minorities, have higher chances of being overweight than those living in the least-deprived areas. By the time they reach 11, children from the poorest areas are three times more likely to be obese than their richest peers, and Black minorities are at a greater risk.

The health implications are clear: obese and overweight people are vulnerable to ailments such as diabetes, heart disease, stroke and cancer. Research has also shown they are at higher risk of suffering severe cases of Covid-19, and death.

The National Food Strategy, an independent review of the U.K. food system commissioned by the government, found that vulnerable adults ate about one serving less of fruit and vegetables per day during the coronavirus lockdown compared with the wider population. About 12{c33c21346ff5e26ab8e0ae3d29ae4367143f0d27c235e34c392ea37decdb8bed} of adults living with children reported skipping meals because they couldn’t afford or access food in the last six months, according to a survey by the Food Foundation charity.

For Lynn, it’s simple math. “You get six apples for 1.60” pounds. “Well that’s one day and they’re gone,” she said. In comparison, a loaf of processed sliced white bread can cost half that. (Lynn is a victim of domestic violence who asked to use the pseudonym provided by a charity that’s been helping her.)

Dwindling access to nutritious produce comes at a critical time. Prime Minister Boris Johnson is under pressure to address the social impact of poor diet after recording Europe’s highest death toll from Covid-19 and as household finances get whacked again, this time by the pandemic. Then there’s the specter of failing to agree a post-Brexit trade deal with the EU, which the U.K. left on Jan. 31. That risks an even a greater disturbance to the nation’s food supplies, a parliamentary report found in July.

The government is taking action. It said in July it plans to tackle the “obesity time bomb.” In a country where salty potato chips in some schools are treated like healthy snacks even if cookies and chocolate are discouraged, one of the measures is to limit advertising of junk food and store promotions of sugary and fatty foods.

Even before the pandemic, unhealthy diets were behind one in seven deaths in the U.K., almost as deadly as smoking, and obesity-related illnesses have cost its state-run healthcare service some 6 billion pounds each year.

Indeed, while middle-class Britons have been savoring sourdough bread or hunks of artisan cheeses, there are still parts of the country where strawberries, bananas or grapes are considered a luxury, Blake at Sheffield University said.

And things could get worse. More than 3 million people have filed for state jobless support since March, with unemployment set to spike as aid for companies and furloughed workers unwinds. A second wave of coronavirus would add to the severity of the situation.

“Everything is budgeted,” said Carletta Gordon, a mother of three who volunteers with Children with Voices, a charity that runs community food hubs in the east London district of Hackney. “That’s where I’ve seen a lot of people struggle. They’re not eating for their health. They are eating because it’s necessary for them to eat. And it’s not necessarily the nutrients they are getting. It’s just the cheapest thing to eat.”

Fears are also growing over access to proper nutrition among kids. In June, the government made a U-turn and agreed to provide free school meals for 1.3 million vulnerable children over the summer after a campaign led by a Manchester United soccer star. The government’s program should be extended to include another 1.5 million children, the National Food Strategy recommended. That would mean almost a quarter of all children in Britain would receive support.

“If we want to help those who are at the bottom of the pile get through Covid, we need to change how we think about access to fresh and nutritious food,” said Denise Bentley, who sits on the advisory panel for the National Food Strategy.

Bentley, a former investment banker, runs the First Love Foundation. The charity provides food aid in Tower Hamlets, a London borough that abuts the City financial district and has historically been one of the poorest in the British capital. In addition to offering food, the charity has been helping people like Lynn to maximize their income to tackle causes of hunger. Demand for its services has risen to the highest in a decade.

Lynn said she has between 50 and 100 pounds a week to spend on all sorts of essentials, including food. While her children like fruit, it quickly adds up. She’s started growing her own vegetables, having picked up skills through the First Love Foundation’s summer program that helps families that struggle to feed their children.

“It’s not enough, but it’s good for my mental health to go out and mess around in my garden and it may give us enough for one dinner,” she said. “It’s one dinner I don’t have to worry about.”

Fri Sep 11 , 2020
Photo credit: Caitlyn Jenner – YouTube From Delish It suddenly seems like every celebrity is pivoting to food content, right? Like suddenly every actor, singer, reality star, and random people who are famous for reasons you’re unsure of are heating things up in the kitchen. And honestly, we’re here for […] 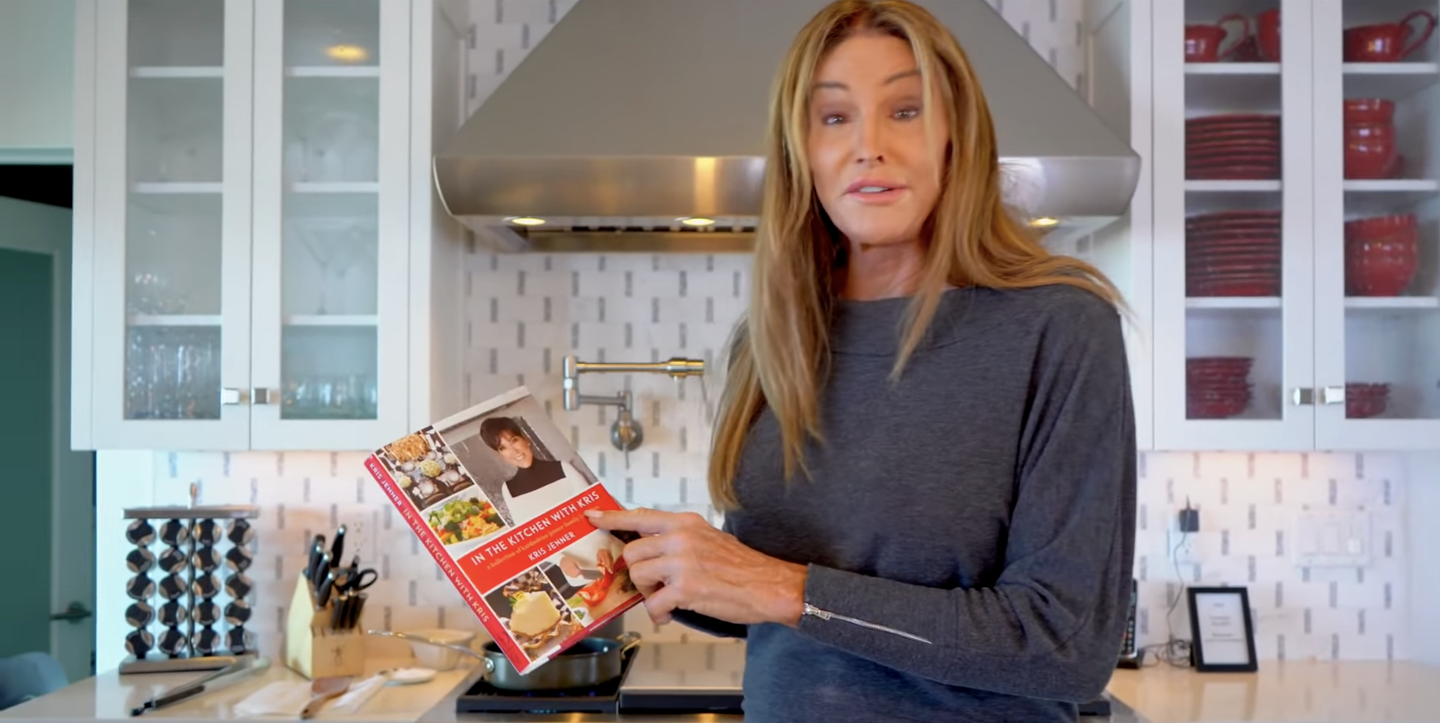