The New York Post once quoted a well-connected industry insider who said, “Having a show on the Food Network is like gold.” For some of the network’s most successful talent, that statement is a fact.

Several of the top Food Network personalities have created culinary empires. Syndicated shows, cookbooks, apparel lines, celebrity restaurants and guest appearances that have earned them millions, tens of millions and even hundreds of millions of dollars. Find out what some of the richest Food Network stars are up to today — and what they were doing before they struck gold.

After a series of coveted cooking jobs and a stint as a personal chef, Duff Goldman opened Charm City Cakes, a shop that would soon be made famous by the Food Network. The show “Ace of Cakes” made Charm City a household name, and the show was wildly popular for its decade-long run, which started in 2006.

Radio-personality-turned-catering-company-owner Sunny Anderson got her big break when she appeared as a guest on “Emeril Live” in 2005. She parlayed that appearance into her own Food Network show, “Gotta Get It,” which was followed by “Cooking for Real,” “How’d That Get on My Plate” and “Home Made in America With Sunny Anderson.”

Anderson currently co-hosts “The Kitchen” on the Food Network. She also created the Infladium — an inflatable snack stadium, sold at Party City — and is the author of the New York Times bestselling cookbook “Sunny’s Kitchen: Easy Food for Real Life.”

A veteran of some of New York City’s most celebrated restaurants, Anne Burrell became a regular face on the Food Network when she appeared by the side of Mario Batali during her stint as his sous chef on “Iron Chef America.” She hosted “Secrets of a Restaurant Chef” from 2008 to 2012 and then immediately was cast in a new show, “Chef Wanted With Anne Burrell,” which ran through 2013.

In 2011, Burrell’s first cookbook, “Cook Like a Rock Star” earned a spot on the New York Times Best Sellers list. She released her second cookbook, “Own Your Kitchen” in 2013.

Burrell teamed up with Cheetos for the wildly popular New York City pop-up restaurant the “Spotted Cheetah” in 2017. She has starred on the Food Network’s “Worst Cooks in America” since 2010.

Published in 2016, his “Alton Brown: EveryDayCook” book earned a spot on the New York Times Best Sellers list. Also a musician, the Alton Brown Trio released the album “Bitter Like Me” in 2018.

Joey Fatone rose to international fame and fortune as a member of one of history’s most successful boy bands, *NSYNC. Later in his career, however, Fatone racked up an impressive array of acting credits and in 2014 was the host of a Food Network series called “Rewrapped.”

Fatone opened the hot dog stand Fat One’s Hot Dogs and Italian Ice at the Florida Mall in 2016. The brick-and-mortar restaurant has since closed but now operates as a food truck in the Orlando, Florida, area.

Still an entertainer, Fatone starred as the Rabbit on “The Masked Singer” in 2019.

He also landed his own talk show on the CW in 2016, but “The Robert Irvine Show” lasted just two seasons. Irvine released his fourth book “Family Table,” in 2019 and he also publishes Robert Irvine Magazine.

The famed chef also has two restaurants. Robert Irvine’s Public House is located in Las Vegas and Fresh Kitchen by Robert Irvine is in D.C., at the Pentagon.

One of the most well-known chefs in the U.S., Tyler Florence has appeared on many different Food Network shows and specials over the years, including “Planet Food,” “All American Festivals” and “My Country.” He hosted “Tyler’s Ultimate,” from 2003-2010 and “Food Court Wars” from 2012-2014.

Florence has starred on both the network’s “Worst Cooks in America” and “The Great Food Truck Race” since 2010. He also has his own YouTube series called “Wolf it Down.”

Although she’s rich and famous now, Paula Deen began her career divorced and desperate with just $200 to her name, according to the Food Network. The platform helped launch her career with the popular programs “Paula’s Best Dishes” and “Paula’s Home Cooking.”

In 2013, Deen was fired by the Food Network, after admitting to the past use of a racial epithet. She eventually returned to the air with the show “Positively Paula,” which ran from 2016-2017 on RFD-TV.

Cook Like a Pro Chef: 5 Ways To Cook a Perfect Steak at Home Without the Restaurant Price Tag

A successful businessman, Morimoto currently has 15 restaurant locations across the world.

Referred to as a “culinary rock star” by the Food Network, Guy Fieri opened his first restaurant in 1996. But he began his career with his own pretzel cart at 10 years old. His breakout show, which was the inspiration for his wildly successful cookbook of the same name, was “Diners, Drive-ins and Dives.” The program debuted in 2006 and remains on the air today.

You can also find him on several other past and present Food Network shows, including “Guy’s Ranch Kitchen,” “Guy’s Grocery Games,” “Guy’s Big Project” and “Guy’s Family Road Trip.”

Fieri also has an extensive restaurant empire. Some of his eateries include Guy Fieri’s Vegas Kitchen & Bar and Guy Fieri’s Chophouse in Atlantic City, N.J.

A winner of multiple Emmy awards, Sandra Lee starred in the Food Network’s “Semi-Homemade Cooking with Sandra Lee” from 2003 to 2011. She was also a familiar face on HGTV, the Cooking Channel and “Good Morning America.”

In 2016, Sandra Lee inspired her fans when she returned to the Food Network to host a full episode of “Beat Bobby Flay” after being diagnosed with breast cancer a year earlier, an ordeal that forced her to endure several major operations.

She went on to star in the 2018 HBO documentary “RX: Early Detection — A Cancer Journey With Sandra Lee.” Lee also scored an executive producer credit on the 2019 documentary “RUTH — Justice Ginsburg in Her Own Words.”

Still very much in the public eye, she regularly guest stars on talk shows and cooking-related television series. For example, she appeared on nine episodes of the BBC series “Saturday Kitchen” in 2019.

Her latest book, “Cook Eat Repeat” will be published in October 2020.

Previously, one of the biggest names in the culinary industry, Mario Batali rose to fame on “Molto Mario,” which ran on the Food Network from 1997-2005. Among other guest spots, he also appeared on 43 episodes of the network’s “Iron Chef America: The Series,” from 2005-2013.

In 2017, the Food Network revealed Batali had filmed six new episodes of “Molto Mario,” which were slated to air in 2018, according to Variety. However, the reboot was shelved in December 2017, after several sexual misconduct allegations were made against the famed chef.

That same month, Batali was fired from “The Chew” on ABC, which he co-hosted from 2011-2017. He also promptly stepped away from his restaurant group, Batali & Bastianich Hospitality Group, which served approximately 24 restaurants at the time, according to Eater.

In early 2019, he sold his stake in the restaurant group. That same year, he also sold his minority interest in Eataly, the Italian market and restaurant chain he helped bring to America and worked to grow in several U.S. cities, according to Eater.

Giada De Laurentiis got her big break in 2002 when a Food Network executive discovered the future star in an article about the De Laurentiis family in Food & Wine magazine. Her recipes are known for their simplicity and tastiness.

She starred in an Emmy-winning daytime show, “Everyday Italian,” from 2003-2011. She also is known for several other successful Food Network shows including, “Giada at Home,” “Giada’s Weekend Getaways,” “Giada in Paradise,” “Giada in Italy,” “Giada’s Holiday Handbook,” “Giada Entertains” and “Giada on the Beach.”

De Laurentiis launched the lifestyle and e-commerce platform Giadzy.com in 2017. Also a restaurateur, she helms Giada and Pronto by Giada in Las Vegas and GDL Italian in Baltimore.

Otherwise known as “the Pioneer Woman,” Ree Drummond is one of the Food Network’s biggest stars. She’s hosted “The Pioneer Woman” since 2011, and she’s not leaving anytime soon.

In 2019, the network announced it reached a new three-year deal with Drummond, which includes new episodes of her hit series. She also runs the popular blog ThePioneerWoman.com, offering readers everything from recipes to style tips.

Drummond has a product line exclusively sold at Walmart — aptly named The Pioneer Woman — which includes a variety of items from cookware to bedding. She’s also a number one New York Times bestselling author of nine books.

Beloved chef Ina Garten has hosted “Barefoot Contessa” since 2002. In 2018, she signed a new multi-year deal with the Food Network that includes new seasons of her hit show, as well as several hour-long seasonal specials, according to Variety.

Also an author, Garten has written 11 bestselling cookbooks. Her next book “Modern Comfort Food” hits shelves Oct. 6, 2020. She’s also working on a memoir, which is scheduled for release in 2023, according to The Hollywood Reporter.

One of the Food Network’s earliest stars, Bobby Flay debuted on the channel in 1994. Two years later, he landed his own Food Network show, “Grillin’ & Chillin’.” His best-known show, however, is his namesake challenge competition, “Beat Bobby Flay,” which has been on the air since 2013.

He has also starred — or regularly made guest appearances — on several other shows on the network, including “Bobby Flay’s Barbecue Addiction,” “Brunch at Bobby’s,” “Iron Chef America: The Series,” “Throwdown With Bobby Flay,” “The Bobby and Damaris Show” and “Worst Cooks in America.”

One of the most instantly recognizable celebrity chefs in the world, Emeril Lagasse will always be known for his trademark “Bam!” which earned him legions of fans on “Emeril Live.” The show ran on the Food Network from 1997 to 2007, before being picked up by the Cooking Channel.

Lagasse helms a product empire that includes everything from slip-resistant restaurant footwear to cookware and cutlery. A New York Times bestselling author, he has nearly two dozen books to his name.

Rachael Ray is one of the biggest television cooking stars in the world. Her namesake affordable cooking program launched her career when it aired in 2007 and quickly entered syndication. It remains on the air today.

Meanwhile, Ray’s “30-Minute Meals” program led to a series of highly successful cookbooks. The show originally ran on the Food Network from 2001-2012. However, the network announced plans to revive it in 2019, according to Variety.

Launched in 2005, her lifestyle magazine Rachael Ray Every Day shifted from a 10-time-a-year-publication to a quarterly magazine in 2019. She unveiled another magazine in 2020, titled Rachel Ray In Season.

Jamie Oliver’s Food Network tenure includes “Jamie at Home,” but he is probably best known for the megahit series “The Naked Chef,” which originally aired on the BBC.

In 2019, 22 of Oliver’s 25 restaurants in the United Kingdom were closed, after his restaurant group went into administration — a form of bankruptcy protection, according to the New York Times.

Despite the U.K. setback, Oliver’s international restaurant business announced plans to open a new concept, Jamie Oliver Kitchen. In November 2019, the first two locations were opened in Bali Kuta Beach and Bangkok Siam Discovery, according to a news release. However, the latter has reportedly closed, due to the COVID-19 pandemic, according to BK Magazine.

In total, the Jamie Oliver Group operates 70 restaurants in 27 markets, working with 20 franchise partners, according to a news release. As of late 2019, 19 restaurant openings were planned through 2020.

Andrew Lisa contributed to the reporting for this article.

This article originally appeared on GOBankingRates.com: Where 20 of the Richest Food Network Stars Are Now

Tue Jul 21 , 2020
One of the major advantages of leading a company that has been in business since 1866 is access to extensive history that could help navigate an uncertain here and now rather successfully. Such is the case for General Mills Chairman and CEO Jeff Harmening, who joined the company in 1994 […] 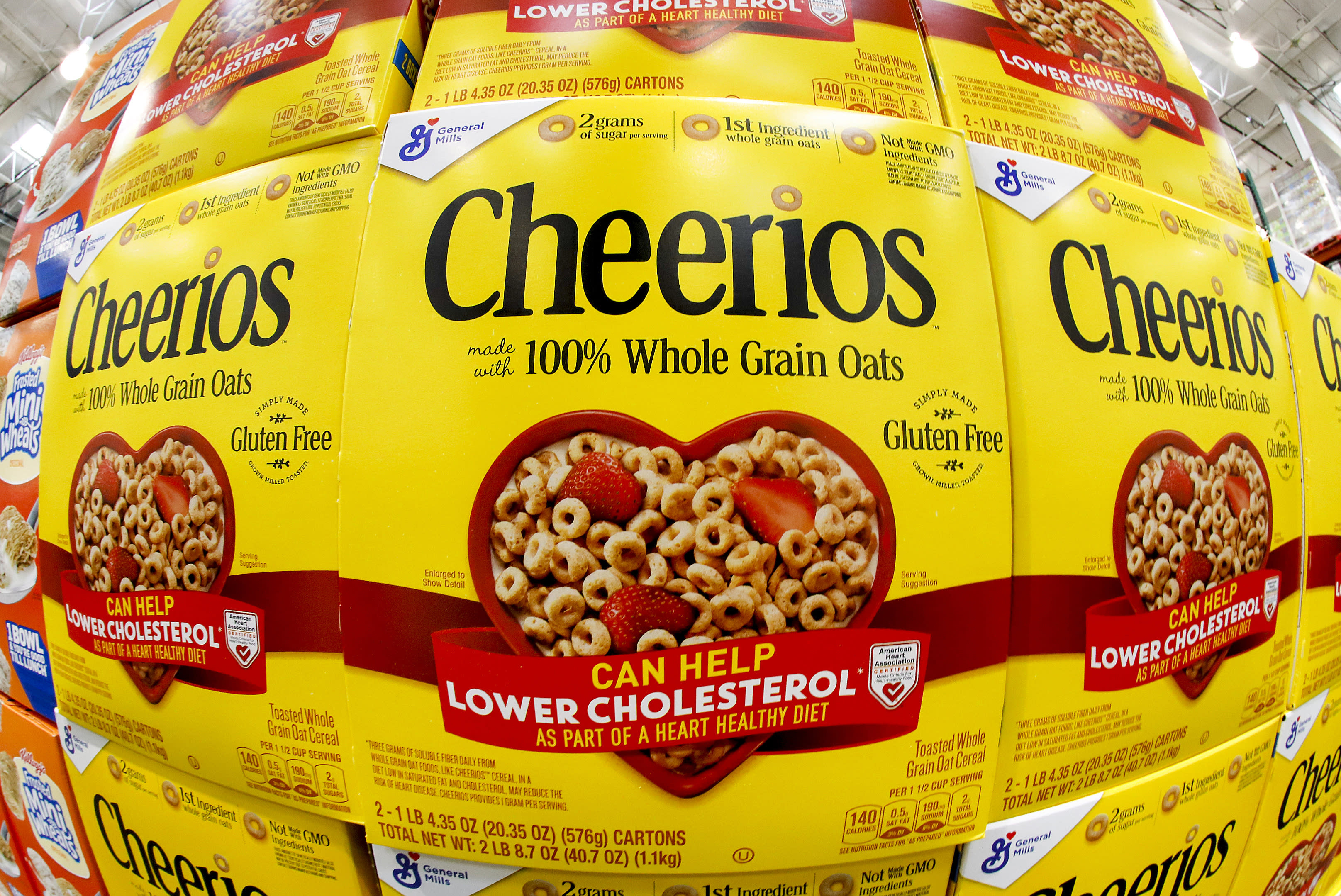