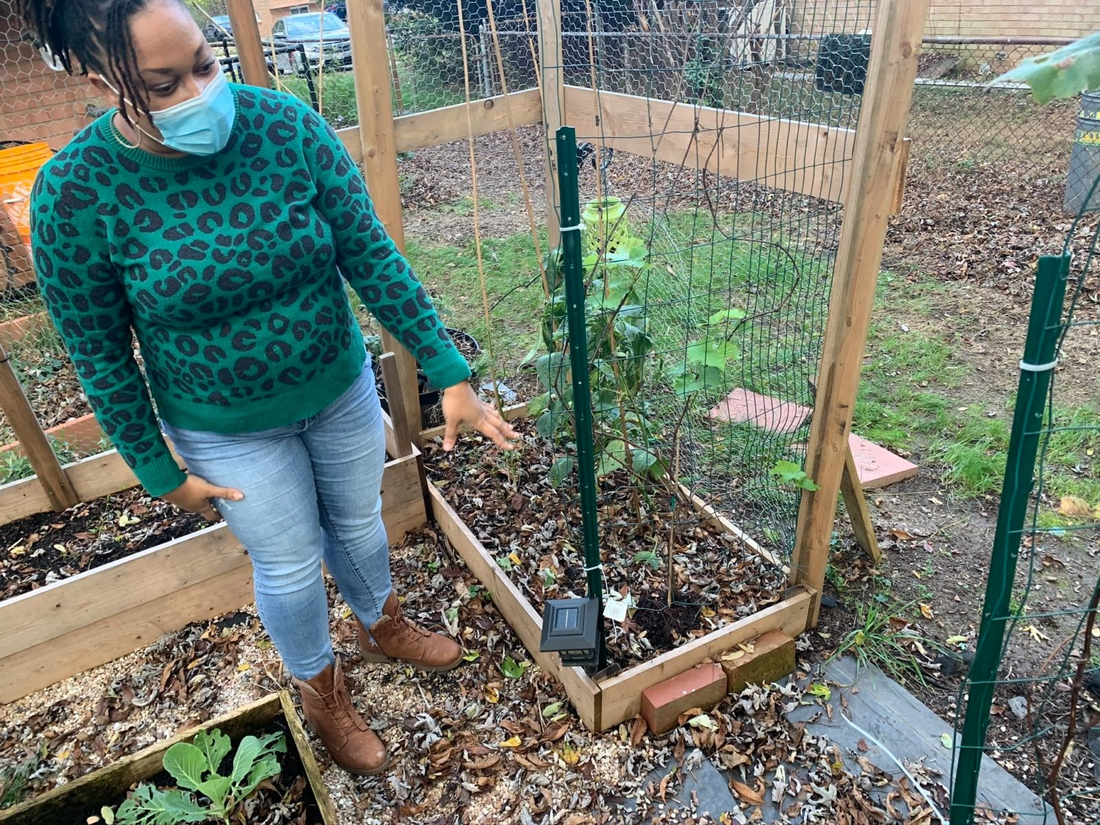 Vanessa Pierre in her home garden where she grows vegetables, herbs, and flowers in plant beds.

Vanessa Pierre walks around her backyard apologizing. It’s a mess, she says. Come back in the summer when the garden will be in full bloom, and there will be lush flowers and vegetables growing along the trellises that rise from neat wooden boxes packed with compost.

But even as she apologizes for what she has little control over — it’s late fall and harvesting season is over — it’s clear that she has more planted in her yard than the average home gardener.

At her home in White Oak, a majority-Black neighborhood near Silver Spring, Pierre grows corn, watermelon, strawberries, garlic, onions, lettuce, cabbage, peppers, flowers, and a long list of herbs for healing teas and medicine. She bought a hoop house on Amazon, where she plans to continue “backyard farming” this winter; she’s constructing six more plant beds so she can donate extra produce to the Manna Food Center, a food advocacy non-profit in Montgomery County.

Pierre’s gardening aspirations go beyond the confines of her backyard, though. On her blog and social media brand Homestead Hustle & Healing, she promotes home gardening, herbalism, and homesteading, a term that refers to a spectrum of self-sufficient lifestyles. (Some homesteaders go off the grid by generating their own electricity and clothing, and raising livestock.)

Home gardening is not just a hobby for Pierre, it’s a mission.

“I want to empower specifically Black and Brown people to regain their self-sufficiency through food, because I fundamentally feel that if you can take care of the basic needs…” Vanessa says, then pauses. “Like, how do we expect people to worry about starting a business and this and that if they can’t put food on the table?”

The closest farmers market to White Oak is in downtown Silver Spring, not a reasonable trip for residents who rely on public transportation. Pierre’s long-term goal is to create a volunteer-run farmers market at the White Oak Community Recreation Center — she would pre-purchase food from local farmers at wholesale price and make it accessible for SNAP recipients (there’s been an increase in incentive programs for these shoppers at farmers markets in recent years). Pierre imagines a bus shuttling people to the market from across the neighborhood.

A data map from 2017 shows that about 9.5% of White Oak residents experience food insecurity — defined as the “disruption of food intake or eating patterns because of lack of money and other resources” — and some surrounding neighborhoods experience as much as 20% food insecurity; across all of Montgomery County, that number is closer to 6%.

During the COVID-19 pandemic, researchers and organizations that fight hunger say food insecurity rates across the D.C. region have only increased. Despite Washington being one of the highest-earning areas across the U.S., the Capital Area Food Bank predicts that an additional 200,000 to 250,000 local residents could struggle to afford food in the next year. Pierre says immigrant families in particular will be hard hit — especially in Montgomery County, which has the highest cost of living in Maryland.

Pierre, a 32-year-old paralegal, comes from a Caribbean community in South Florida. Growing up, she spent most summers with her family in Borobridge, a little-known town in Jamaica where she says “farming is wealth.” Her grandparents had a lot of land and animals, and everything was fresh. They often fed members of the community who visited the house.

For family meals in Florida, her aunt cooked fresh-caught snapper and brought vegetables she grew, while another relative would bring avocados. Her uncle still send her boxes of Jamaican callaloo seeds to grow in her garden.

“We’re very much of the mentality of, ‘Teach a man to fish,'” she says. “What better way to foster community than through food?” 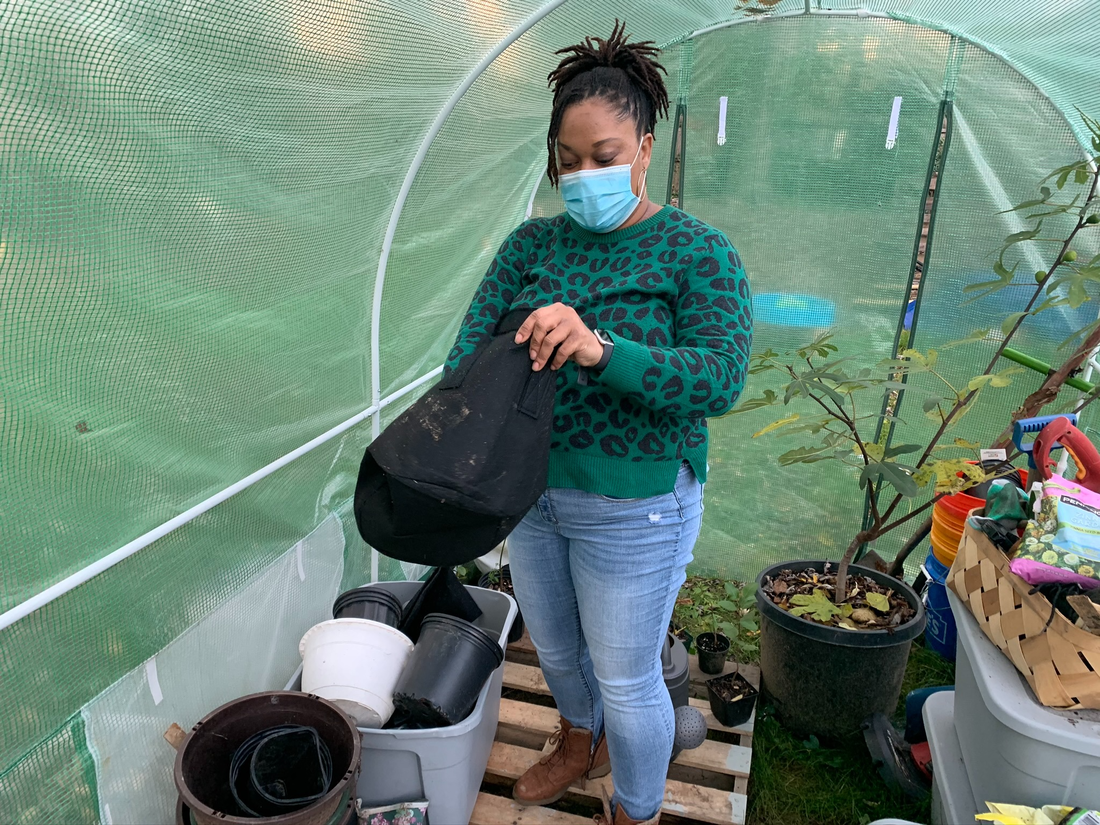 Pierre in her hoop house, which she ordered on Amazon.

This mentality of cooking for a community inspired her to become more active in local food advocacy programs. She moved to White Oak in 2016 and has since joined Capital Area Food Bank‘s Client Leadership Council, taking part in a 10-month training program to advocate for change in her community. With the skills she’s gained, Pierre has pressured Montgomery County legislators to do more to combat food insecurity in the county’s neighborhoods that don’t see the same affluence as nearby Bethesda and Potomac.

She recently joined the Montgomery County Food Council, reviewing grants and volunteering as part of the food recovery and access working group. She reviewed a council grant initiative that would help locals set up their own gardens. Independently, she’s working on putting together garden starter kits to distribute in the spring.

“The homesteading lifestyle is about starting where you are with what you have and using everything to provide for your family,” Pierre says. “You can homestead in the city, I promise.” 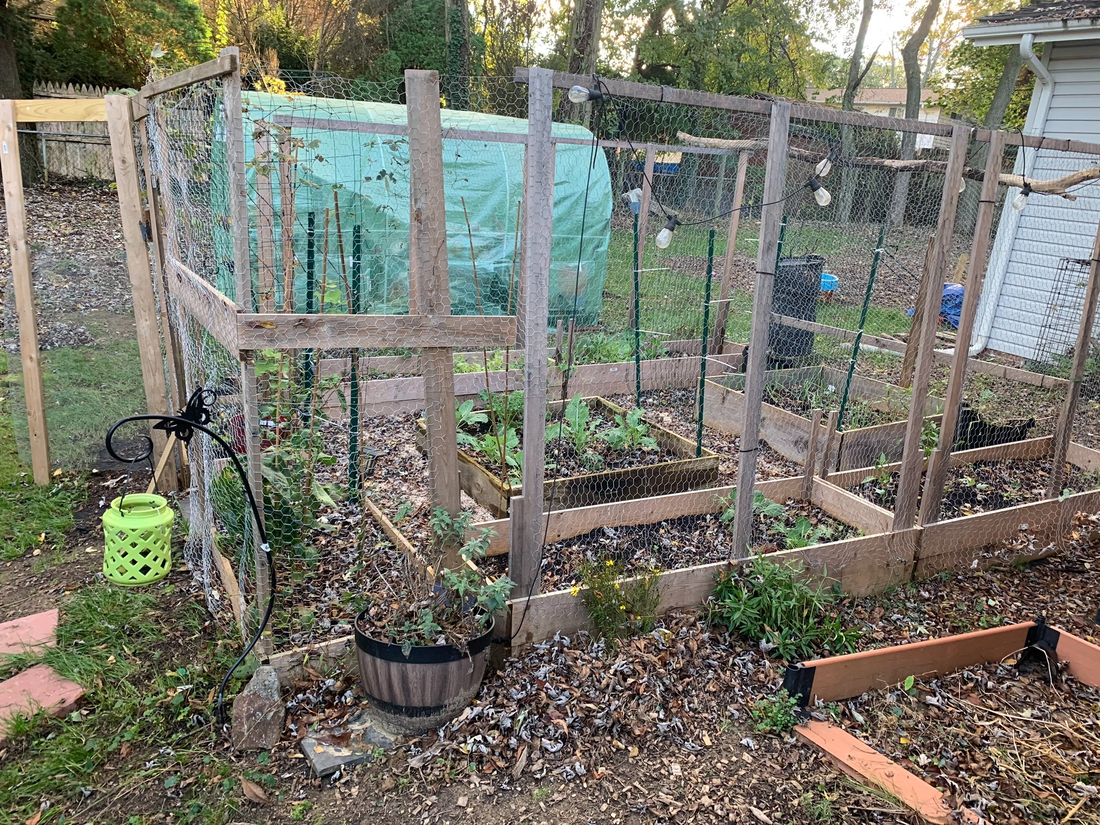 Pierre started a home garden to reconnect with the land and her family history of growing their own food.

Pierre testified before the Montgomery County Council during an April budget hearing and drew attention to the lack of transportation options in the area and the high prices at the nearest grocery stores, Giant and ShopRite. She asked for funding to kickstart her farmers market idea.

“Fresh and healthy foods are no longer an option. Chips are cheaper than apples,” Pierre said in her testimony. “[The Council’s] work through the 2017 food security plan to address access and availability is commendable, and that forward thinking is part of the reason I love it here. But we can do more.”

She’s received little response from the Council since the pandemic started, but Pierre plans to take matters into her own plans and create a non-profit organization so she can apply for grants. The organization would help her start the farmers market, but it would also continue her mission of educating new homesteaders.

When she tells friend and locals they can grow carrots in their basements using cloth bags and LED grow lights, they look at her funny, until she shows them how easy it is.

A mother of three, Pierre teaches her children how to garden and enjoys seeing their excitement when they ask if they can try planting something new. “Sure, why not?” she replies, not sure if it will work but willing to experiment. They recently tried growing a pineapple and plan to dig it up before the winter. They preserve, dehydrate, and can their own foods, and make their own sauces. They bake bread from scratch and water plants using rainwater caught in buckets. From an elderberry plant, Pierre makes syrup to tackle her family’s coughs and colds.

The motivation for her local advocacy work comes from a personal place.

She had her first son when she was 20 years old and her second son 18 months later, and she struggled to afford meals. At different points over the years, she’s relied on SNAP benefits (or food stamps), worked night shifts and taken up side hustles to put food on the table. This busy lifestyle reminded her of her own mother, who worked long hours and sometimes had two jobs at a time to keep the family fed.

“I was always having to question [my] values that I was brought up with — not to accept help — mixed with feeling like I was doing something wrong, because how could my mom and my family have done it and I’m struggling?” she says. “My mom’s like, ‘No, we struggled. We just never let you guys feel the effect of it.’ And I think that’s the core of food insecurity, that constant anxiety that causes your health to decline.”

Pierre was diagnosed with lupus in 2007 and one of her sons was diagnosed with autism at 3 years old a few years later, prompting her to grow and make homemade “food that wouldn’t make us sick,” she says. Over time, she became fully invested in homesteading and reconnecting with her family’s tradition of providing for themselves.

And what better time to promote access to affordable and healthy food? Some neighbors, however, are resistant to growing their own food, Pierre says.

“You know, from my people, I sometimes get the, ‘We not on the plantation no more,’ or, ‘That’s white people stuff,'” she says. “And I’m like, we need to start healing our relationship with the land.”

“The land was the scene of the crime. It wasn’t the aggressor,” she continues, echoing Farming While Black author Leah Penniman. “We’ve equated farming to us going back in time, as if we’re in some type of oppression from the land itself.”

But Pierre has learned that the land is the key to self-sufficiency. Gardening, she says, is a revolutionary act.