“To describe that meal as something that you make is too generous,” Ziwe says of cantaloupe with prosciutto.
Illustration: Margalit cutler

“I’m constantly trying and failing to be a vegetarian,” says the comedian Ziwe Fumudoh. “I feel like I should get morality points for making the attempt every day.” You may know Fumudoh as a writer on Desus & Mero or for her stand-up, but more likely have watched her lean in and ask frank and uncomfortable questions on her weekly Instagram show Baited! On the show, which Vulture’s E. Alex Jung calls “comedy that speaks to a chaotic and internecine cultural moment,” she’s interviewed people including Caroline Calloway, Alison Roman, Jeremy O. Harris, and Grace Kuhlenschmidt. When it comes to food, Fumudoh says she’s “a creature of habit,” and this week she ate and drank a lot of her favorite things: iced chai, tater tots, jollof rice, and an ube doughnut.

Thursday, July 30
I famously do not drink coffee. Every day, my eyes open at 7 a.m. and I am ready to start my day. Occasionally, I drink an iced chai because I love how sweet it tastes. Sugar is my greatest vice. I have the palate of a middle schooler with an expense account. There are weeks when I’ll go through two boxes of brownie mixes by myself. There are days where I’ll eat several pints of Talenti ice cream (raspberry cheesecake and cookie dough). I don’t really drink, so this is how I let loose.

I take my iced chai with an asparagus croissant. I love asparagus probably because some of my most formative, deeply religious childhood memories are watching Veggietales, which features a talking asparagus named Junior. It’s just very savory. The only issue is that it flakes when you bite into it. But I enjoy it, I’ve been eating it for years. I get the croissant and chai from this coffee shop, but I don’t want to say what coffee shop it is, because I don’t want it to become popular.

Not to flex, but I do know how to make traditional jollof rice with okra and some fried chicken. It is a Nigerian dish that I grew up eating and one of my favorite dishes to eat. If there was ever a debate about whether I would make a good Nigerian housewife, the answer is still probably no. Just kidding, I’d be FINE.

It’s just something I really enjoy because it’s savory, it feels like I’m getting my vegetables in me, yeah, it’s nice. I make it in bulk, I make it for four days’ worth of food. It’s a process, you have the chicken broth and then you have to make the tomatoes, mix it with the tomato paste, so I make it in bulk.

I didn’t have to learn how to make it as a kid, my mother probably pressured me, but I never really learned how to do it. But as an adult, I was like, This is the food that I remember fondly and like. Nigerian jollof rice, which is better than Ghanaian rice, is very famous, so it was a priority to learn how to do this and then cook it. There’s a war going on between Ghanaians and Nigerians regarding their rice, and Nigerians will be victorious. Because Nigerians do it better.

Friday, July 31
What did I eat today? Honestly, the days don’t mean anything, so it’s all relative. I would argue that I am dying in my bedroom. Every single day I die a little further. I definitely feel like I’m wasting away during the pandemic, but we are on a march towards death the day we are born. No offense.

I had an ube doughnut that my roommate bought in Flushing, Queens. It’s a traditional Filipino donut. It was delicious, but I love all sugar. Once upon a time when I was severely depressed, as opposed to now when I am only moderately depressed, I would eat a doughnut a day to feel joy. I had to stop this as a doctor warned that an all-sugar diet was “very bad for me.” I have an extreme personality, I either eat my feelings or I forget meals because I’m too wrapped up in work. Or I become absolutely obsessive and eat something until it makes me sick.

When Hillary lost the election, I ate pad thai and pad see ew everyday for a month. Then I couldn’t eat Thai food for a year. Fun fact: As a child I became absolutely obsessed with tapioca pudding to the point where I was eating like six cups a day. I ate so much tapioca pudding, I made myself lactose intolerant for two years.

Arms locked in harmony, I love a good sugary sweet. But it’s to my detriment. Sometimes I’ll eat so much sugar, like I’ll eat two pints of Talenti, and I’ll feel it in my legs. I’ll feel my legs twitching. It’s not a very good place to be where you’re eating so much of one particular item that you feel physically ill for days.

I also had some cantaloupe with prosciutto. I love prosciutto with cantaloupe. Anything that combines savory and sweet, is right up my alley. I discovered this meal when I went to Italy. Fun fact: In Italy, people frequently asked me if I was Rihanna. I don’t look anything like Rihanna, but I believe in my heart the people I was interacting with were only familiar with maybe three black women.

To describe that meal as something that you make is too generous. You throw slabs of thinly sliced ham on to cut up pieces of fruit, and then you nosh on it until you feel full. So, yes, I love to cook prosciutto and fruit. It’s not a difficult dish and that’s the reason I gravitate towards it, because all I need to do is buy prosciutto and have a melon handy. You really shouldn’t give yourself too much credit.

The jollof rice, that’s labor intensive, that’s centuries of training being acted upon as I cook, as I put my foot into the dish. Cantaloupe with prosciutto is just having the ability to Google sweet and savory. When I went to Italy, I was like, “Oh, these guys have meat with everything — let me get on that wave right quick.”

Saturday, August 1
I had an iced chai and asparagus croissant again in the morning.

This year I made a commitment to becoming a vegetarian. It has been a difficult process for me because culturally, I was raised to eat meat with every meal. I know that eating less meat is better for the environment, and I want to try and do my part to leave a cleaner Earth for the next generation.

My biggest struggle with being a vegetarian is that I vehemently dislike the texture of beans. They are so mealy. Goodness. I’ve never been a beans fan, and I was raised in an African household. Another huge impediment to becoming a vegetarian for me is that I don’t know what qualifies as a vegetable. Apparently, chicken nuggets are not vegetables. Who knew? Certainly not me.

I can usually maintain a vegetarian diet for two weeks before I falter, usually from iron deficiency and sheer ignorance. But the one vegetarian option that I consistently love is Impossible burgers. They taste like real burgers (and no I was not paid to say that). Burgers are my favorite food in the world, but I’m trying to cut down on eating them.

Unfortunately the saturated fat content is super-high, so I try not to eat them too often. I don’t know anything about nutrition, but I’ve heard it’s not good for you. I’ve heard, allegedly, that saturated fat clogs your arteries, allegedly. But if there are any scientists reading this, a meat substitute with low saturated fat would absolutely change the game.

It’s worth noting, I think veggie burgers are disgusting and the texture is too mealy. I eat my Impossible burgers with spinach, one of my favorite vegetables despite the fact that it spoils in 45 minutes, and tater tots. Tater tots are a nod to my Junie B. Jones taste palate, but in my defense, when you put tater tots in an air fryer, they really hit the spot.

I’ve been using the air fryer for about a year. My roommate had it, and I was like, “What is this?” I started using it once he explained what it was. Also, it just eliminated dishes and made my life easier. I would just cook the tater tots in the oven before, but it doesn’t taste as good.

I use it whenever I cook tater tots, so maybe once a week, twice a week. I’m a creature of habit, so I’ll go on a wave where I’m eating several Impossible Burgers a month, and then I’ll go two months without eating anything at all.

Sunday, August 1
I absolutely love ramen. I have been eating it all my life, but I only recently learned that you could add a half-boiled egg, scallions, greens, and shrimp to ramen to make it fancy. I get a nice brand of ramen. It’s not too expensive. It’s called Shin Ramyun gourmet spicy. I just like the spices. It’s tasty. I like spicy stuff. I’m spicy.

My favorite spice in the world is Lao Gan Ma Spicy Chili Crisp Hot Sauce. It is so delicious and I go through several jars a month.

I got really into this chili oil when I was introduced to it at one of my favorite restaurants. I wasn’t always into spicy food. One of my favorite meals, which I didn’t cook, is ground beef with macaroni, tomatoes, and onions. My mom would add spice to that and as a kid I would say, “I can taste the spice, I can taste the spice, it’s killing me.” Until eventually she took out all the spices. Which is such an annoying thing for a child to do, but I’m a middle child and I’m desperate for attention. Now as an adult, I have a much more refined palate than when I was wearing Lisa Frank and had a rolling book bag.


By submitting your email, you agree to our Terms and Privacy Notice and to receive email correspondence from us.

Fri Aug 7 , 2020
ST. LOUIS — Shelter in place orders have allowed many families to sit down together and have dinner again. Meal prepping, incorporating the kids in dinner preparation, all of these positives have made Food Network chef Alton Brown teach others how to be creative in the kitchen. “If you get […] 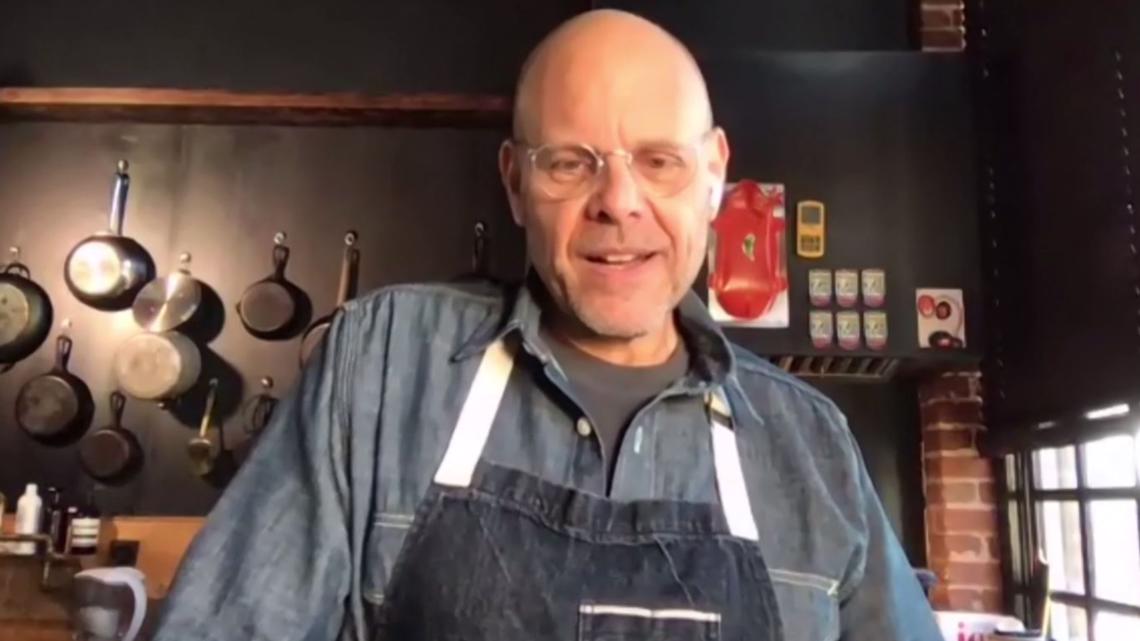