Today we explore the unique fruit rambutan, including its mythology and how you can incorporate it into café beverages.

As someone raised by two immigrants from the Philippines, I grew up in a household where ‘unusual’ fruits were a commonplace occurrence. However, I know that there are many ingredients from my childhood that may be foreign to others, which is why I’m sharing my love and fascination for these flavors through our series ”Know Your Ingredients.”

In today’s installment, we’re continuing our exploration of Asian—specifically Southeast Asian—flavors by turning our attention to rambutan. Rambutan is a tropical fruit with origins mainly in Malaysia and Indonesia. This fruit is also commonly grown in Thailand, Singapore, the Philippines, Sri Lanka, Australia, and Hawaii. Its name comes from the Malaysian rambut, meaning “hair”—a reference to the hair-like spikes on its exterior.

The Legend of Rambutan

An ancient Philippine legend tells the story of how rambutan came to be. One day, a man living in the forests by Rabba Mountain came across a deer being attacked by a tiger. Feeling sympathy for the deer, the man used an ax to wound the tiger, thus saving the deer’s life.

After being rescued, the deer transformed, revealing itself to be a beautiful fairy named Rodona. Rodona revealed that the tiger trying to take her life was actually Matesa, an evil witch who wished to have complete control over the forest. Grateful to the man for saving her life, Rodona promised to grant him one wish—and so he wished for a child.

The man and his wife soon had a healthy baby girl and named her Rabona, a combination of the name of Rabba Mountain and the fairy Rodona. One day, the young girl Rabona found a cat in the woods and took it home with her. At the stroke of midnight, the cat transformed into its true identity: Matesa, the witch who had tried to kill the fairy Rodona but was wounded by the man.

As payback for the man wounding her, Matesa placed a curse on the young girl Rabona. The curse caused the girl’s hair to grow thick, long, and cumbersome, getting in the way of her ability to do anything. Months passed, and one day, Rabona—tired of being weighed down by her hair—woke up in the middle of the night to burn down her parents’ hut.

The next morning, the parents woke to the hut burned to the ground—and Rabona was nowhere to be found. In her place, a tree had grown, adorned with peculiar fruits with long, thick, spiny “hair” growing from their skin. When the parents tasted the fruit, it was sweet—and they immediately knew that it was Rabona. To honor their lost daughter, they named the fruit rambutan, and it would eventually become known as one of the sweetest fruits the region had ever produced.

Rambutan Around the World

Rambutan’s flesh has a texture similar to a grape, with a sweet and slightly tart flavor. It’s popularly used throughout Asia in juices, ice cream, smoothies, and other desserts. Rambutan can also commonly be seen in savory dishes like salad, soup, and curry. Today, rambutan is known globally as a superfruit—rich in fiber, vitamin C, vitamin A, calcium, iron, potassium, magnesium, and more.

Rambutan can be incorporated into beverages the way that any other fruit would. Curious to try this fruit for yourself? Try our iced rambutan matcha latte recipe below!

First, make your rambutan syrup. To do so, whisk the sugar and 1 cup of water together in a small saucepan over medium heat. Boil the combination for 5 minutes. Remove the pan from the heat, then add your chopped rambutan and mash everything together with a potato masher or a fork. Cover the saucepan with a lid and allow everything to steep for 30 minutes.

After 30 minutes, strain the mixture into a bowl or a jar. You can also add some of the crushed fruit to the syrup for texture if you’d like. Now you have your rambutan syrup, which you can add to beverages as you please! You can store the syrup in the refrigerator safely for up to a week.

Next, make your matcha latte by whisking your matcha powder with the 2 ounces of hot water. Add this mixture to your 8 ounces of milk (alternative milk is fine). Add 2 ounces of your homemade rambutan syrup and stir.

Pour the combination over ice, and it’s ready to serve!

Based in Los Angeles, Emily Meneses (she/her) is a writer and musician passionate about culture and collective care. You can regularly find her at Echo Park Lake, drinking a cortado and journaling about astrology, art, Animal Crossing, and her dreams.

Sat Jan 7 , 2023
Featuring golden fried paneer pieces in luscious gravy, paneer tikka masala is a captivating Indian dish everyone should try. Perfect for vegetarians, this deeply-spiced recipe is the taste of India on a plate.  If you’ve tried our chicken tikka masala before, you’ll no doubt love the meatless version of it […] 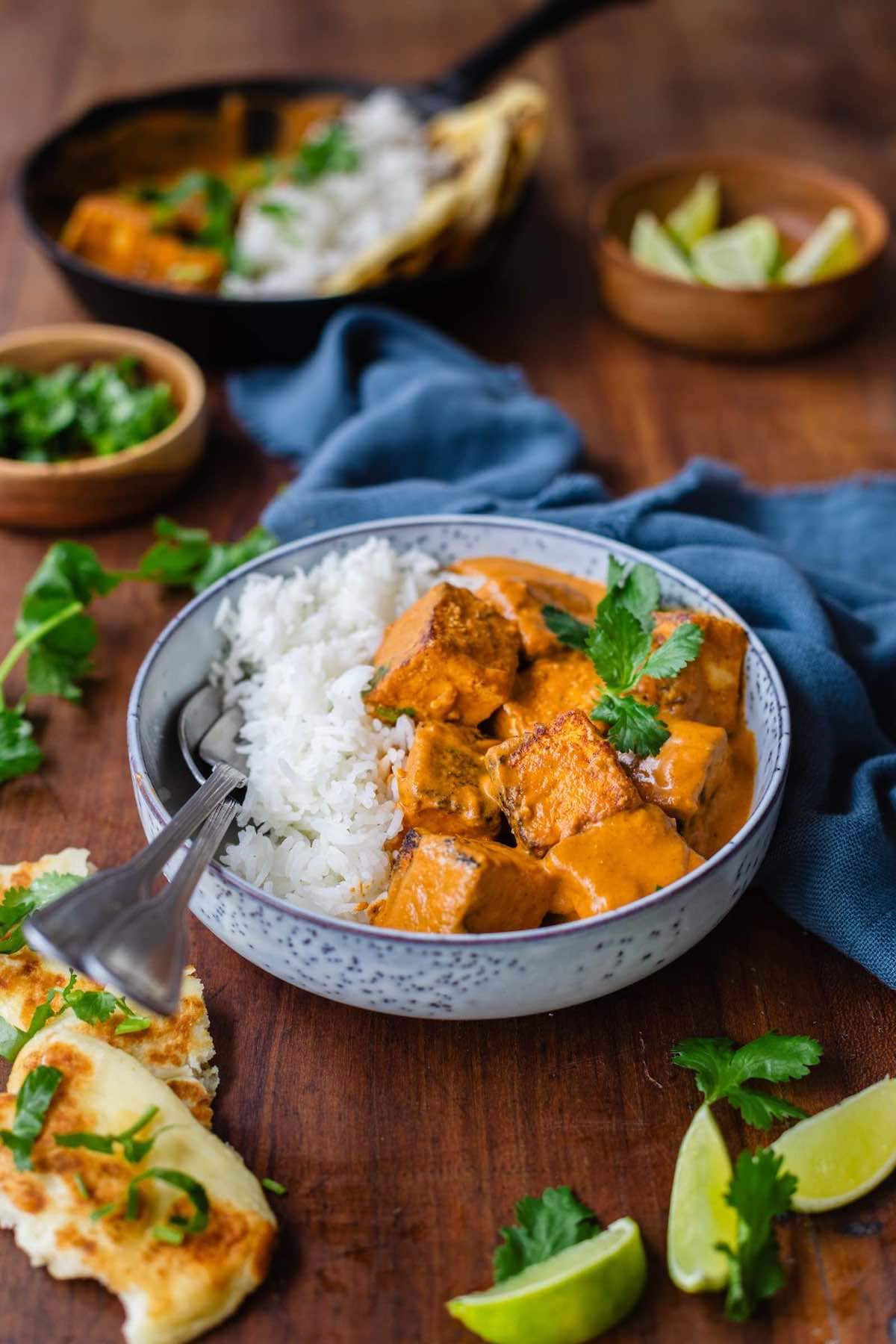